Inspired by a Ghostwritermummy’s haunting post about her own experience.

The twins are nine weeks and one day old today.

This time nine weeks ago, my heart was still set on a minimal-intervention natural birth.  We had meetings with the consultant midwife about it, and she was supportive of our requests.  Barring actual medical necessity, there would be no touching, no disturbance.  No invasion of my mental space, much less my body.

Then I developed obstetric cholestasis after going overdue, and allowed myself to be talked into an induction.  The ward was extremely busy.  After twenty four hours, in which I ended up having to be rehydrated by IV after the midwives were too busy to bring me water and the woman in the bed next to me almost gave birth in the induction bay because they were too busy to check her – much less administer the pain relief that she begged for – I demanded a caesarean section for fear that we wouldn’t make it out of the ward intact.

I wanted a low-intervention birth, but I wanted it to be safe.  Watching the chaos unfolding around me in that ward, the disorganisation and the lack of attention to patients, it felt anything but safe.  I wanted to know that if I felt there could be a problem, a midwife would be available to attend to me swiftly, but midwives were taking hours to check on their patients and halfway through one shift, I realised that I hadn’t even been introduced to who was apparently responsible for me.

I ‘chose’ a caesarean section based on what was happening around me.  It seemed like a non-choice at the time.  There was chaos unfolding in the beds around me – culminating in one woman, dilated to 8cms and still in the induction bay, being rushed away haemorraghing – and I had lost all faith in the medical system.  It was not what I wanted, but it was the least terrifying option available at the time.  The caesarean experience was one of relief, because there were competent professionals around.  Finally, I felt that we were safe.

Because that ward was understaffed on that day, I chose to have my body mutilated.  I chose a birth experience that was the opposite to what I had planned for and dreamt of.  I signed up to potentially being denied my home birth with the next (assuming that it’s a singleton).  Because I had no faith that we would get through my hospital birth safely, because every woman around me who was further along in the process was being failed right before my eyes.

My primary emotion on the day that the twins were forced into the world wasn’t one of love, it was one of relief.  Relief that it was over.  That we could go home.  That I didn’t have PTSD, which was starting to feel like a real risk.  It didn’t feel as though I had given birth at all, just that somebody had handed us two babies.  Two random babies.  In my head, I was still waiting to give birth.

Thankfully my partner bonded to the boys instantly and has been brilliant, but I do wonder what would have happened had I fought for my home birth, or else gone private.  Would I still have wound up with a caesarean?  Would breastfeeding have been easier?  Would there have been that love-at-first-sight moment with the boys? 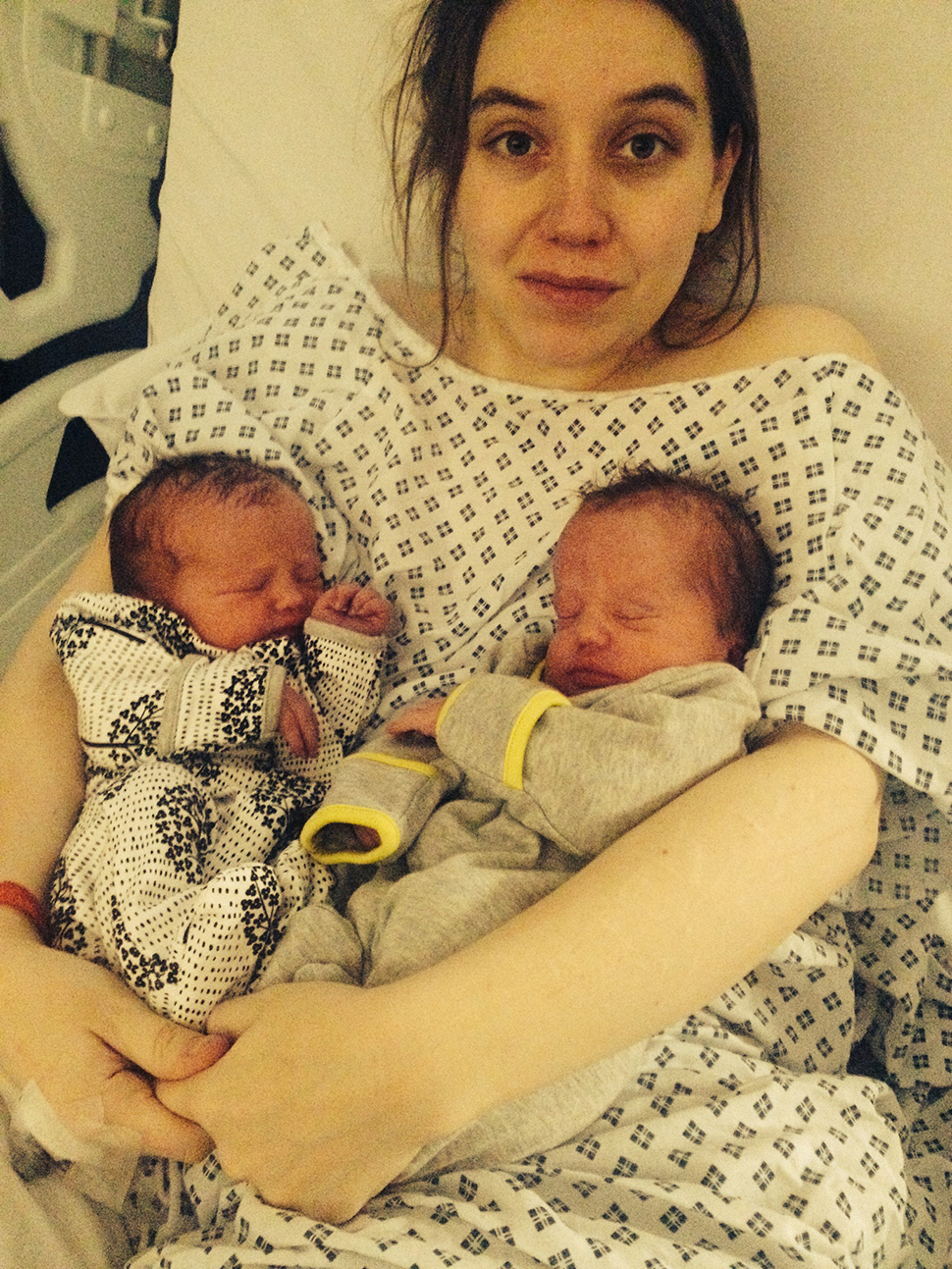 In the photographs of me with them on that first night, I mostly just look shellshocked.  I have wild hair and big black eyes from spending the entire night before the caesarean weeping.  I don’t look like me.  I don’t look jubilant.  I look small, squashed by the experience.

Physically, I had a marvellously easy recovery: Ibuprofen for three days, out running with the dog within a week.  Mentally, I’m still repairing the damage nine weeks on.

And it’s unacceptable.  It shouldn’t happen to any woman.

It won’t happen to me again.

Me & Mine in December

I would describe caesarean birth as life saving rather than ‘mutilating’. I had a traumatic labour (in short … Back to back contractions for 24 hours, no pain relief that worked, pushing for 3 hours and head injury caused to my baby followed by emergency – life saving – c-section). With my second pregnancy I elected to have another caesarean – it was all the things you describe a natural birth to be, life affirming, empowering and stuffed full of endorphins.

It’s awful you had such a terrible experience – don’t lose faith though, the NHS is desperate for you to have a VBAC If you have a singleton next time (and will support you really well in my experience) whatever your choice.

Congratulations on your babies!

That sounds like an horrific experience but I complete understand your motives for taking the route you did. My first child was induced and unfortunately I was one of them poor women who were forgotten about, left to labour with little checking or pain relief and as a result I very nearly delivered on the labour ward! Do not feel bad for your decision, your boys were delivered safely and are thoroughly adorable and loved. Love to you all xx

Firstly, I hope you’ll forgive me for saying congratulations. I say forgive, as I am not sure its the right word; I remember feeling so confused when people congratulated me after Luka was born. Yes he was here, and healthy but it felt like that one word dismissed all that I’d been through and reinforced the misconception that all that mattered was a healthy baby. That is not all that matters at all. It matters that mum is healthy and happy too.
I am so sorry this happened to you. It sounds strikingly similar to my first birth- I was induced at 42 weeks and left alone after midwives assured me I was not in labour. I was finally taken down to delivery to be cared for (and I was cared for, this time) but when the decision came to do a section I was so relieved. I also agreed to have my body mutilated to save my baby and to save myself from further interventions and mishaps. It was nothing like the water birth I’d dreamed of, and it played a huge part in the fear I felt during my second pregnancy. That fear went on to destroy my confidence in myself and my body and ultimately led to a failed VBAC and an even worse c section under GA. And it was that c section that really destroyed me.
If you can take anything from this, and that will probably be easier over time, then please do not take the fear. Your body IS designed to give birth (if it can carry a baby full term and beyond then it sure as hell can deliver it too!) and you are most definitely able to opt for a home birth, water birth, medical birth- any birth you want! Your body, your choice.
Until then, be kind to yourself. Its ok to grieve for the birth you wanted and should have had. I’ve learned that, finally. And if it helps some time in the future, ask to read through your notes if you can and try to make some sense of what happened. I learned a lot about Luka’s birth by reading my notes and I intend to request Elsie’s notes soon too.
The Birth Trauma Association has a facebook group that has been a wonderful support to me and the ladies on there truly do understand what you’ve been through, and are going through.
I hope that your beautiful boys can bring back the you that you are missing and heal some of the scars of their birth, and I hope that you’re able to find some peace with it all one day. x x x x x

Oh my goodness, I am so sorry you went through this.
I am a twin and back when my mum was pregnant they didn’t allow them to go overdue. It was very full on, so many people in the room mostly being people who just came to watch twins being born rather than assisting with the birth. It was really invasive.
I hope you’ve been given support from the community midwife or health visitor, or your doctor, to help you with the trauma.
Lots of love to you xx

This makes me so sad. I too had planned a natural, minimal intervention birth first time around. Although I went into labour naturally, I was talked into having my waters broken and then an epidural, and 15 hours later wound up having a caesarean. It was awful. The surgery went ok, but it wasn’t what I had planned. I wound up with a uterine infection and back in hospital and then stopped breastfeeding, because the support for that was rubbish! I felt mutilated too. I would give anything to go back in time and just refuse the intervention.

I’ve since had a VBAC. I had to push for it to be in the water, but the hospital was pretty good. My vbac wasn’t without complications, more so than my “straight forward” caesarean, but I was listened to and respected, and it was not traumatic. Nothing like my unplanned and unwanted surgery.

Don’t rule out anything for future births. You can choose any birth you wish, it’s always your birth. And there’s lots of info on line about vbac if you wish. I’m sorry you had to go through this, and thank you for speaking up about it. I think it’s also ok to punch anybody who says, “at least you and baby(ies) are ok/alive/here..” In the 21st century, women are allowed to expect much more than that from birth!

[…] twins turned two months old two days before Janaury began. My first post that year was about birth trauma, which is probably a reasonable indicator of where my head was at that point.  The twins were […]