I predicted that this summer would be magical, I wasn’t wrong. We have eaten strawberries, warm from the sun, and chased across the commons, laughter ringing in our ears, the boys saw their first ever concert (In the Night Garden Live), visited the zoo, and we spent a day all together in Brighton. Every day they are growing and changing, and every weekend I am awestruck at the differences in them. It is bittersweet, and somewhat ironic – in an Alanis Morrissette sort of way – that it is in being away from them that I truly notice them, those subtle developments, those changes.

Every Saturday morning there is something that makes me catch Kirsty’s eye, makes me murmur “Did you hear that?!” over a small, sleep-tousled head. And every time, she has heard it fifty times over the course of the week, and yet she has the good grace to smile bright and be astonished and joyful with me.

As a working parent, sometimes I feel as though their childhood is pouring through my fingers and if I think about it too hard, about the milestones I’ve missed and the memories that I have failed to make, I start to feel sad and panicked that I’m doing it wrong and missing out and damaging my children in the process. Sometimes I feel as though the weekends are not enough, sometimes I feel desperate to step outside of the rat race between office work and house admin and just focus on us, the six of us, to build memories and laugh together and play.

And that is just what we did at Butlins.

Our stay was booked from Friday to Monday at the Bognor Regis resort; we were booked in to one of the Seaside Apartments at the Atlantic Bay. We arrived by train at about 14.45 and tumbled gratefully in to our waiting taxi to arrive just in time for our 15.00 check-in. Our initial impression of Butlins was a positive one; check-in was easy and everybody was so welcoming and friendly, from the staff who directed us (and redirected us when we got lost – this mama can’t read a map!) to the fellow holiday-makers who chatted with us everywhere we went. Our apartment was lovely, very clean and spacious, and largely toddler-proof. The boys did manage to lock themselves in the bathroom, but they were very easily rescued with a 10p coin and a bit of initiative! 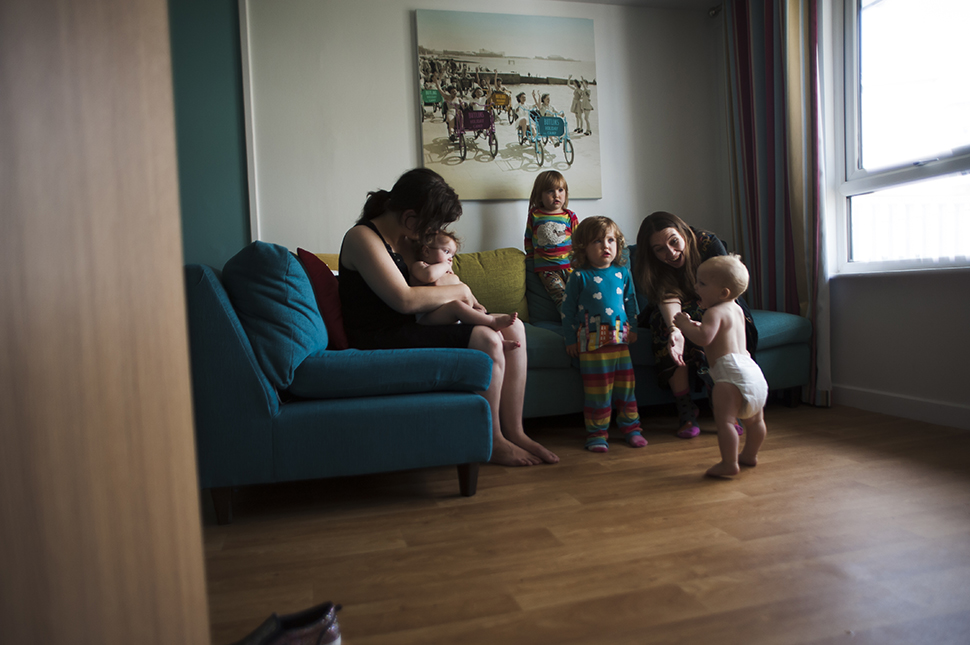 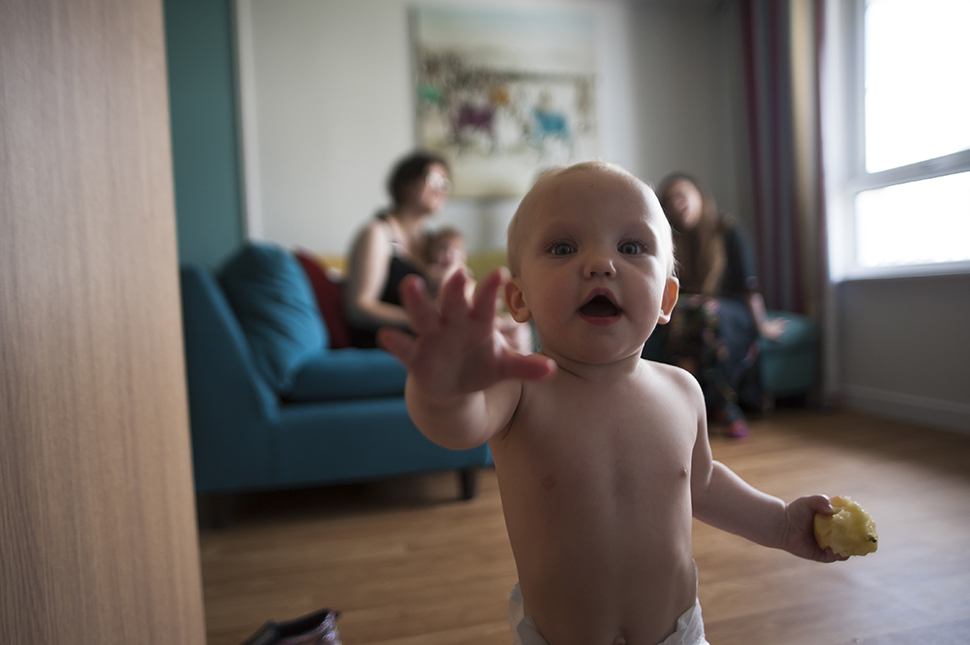 This was our living room.  Olympia likes to say ‘uh oh’ and then knock the tripod over, which is decidedly less hilarious than she thinks it is!

We didn’t spend very much time in our apartment though, because there was just so much to do. Between the two playgrounds, soft play, the indoor tots fairground and the beach, every moment was crammed to the brim with excitement and adventure for the boys – and we didn’t even get a chance to explore the indoor water park – Splash – Plah Doh Live or Messy Time, all of which we were excited to try out. Both the boys and their baby sisters (eleven months old) enjoyed the Teletubby Show, which they had been eagerly anticipating and which didn’t disappoint! Everybody enjoyed getting up for a dance and the tunes were surprisingly catchy – in fact, they are still in my head now! 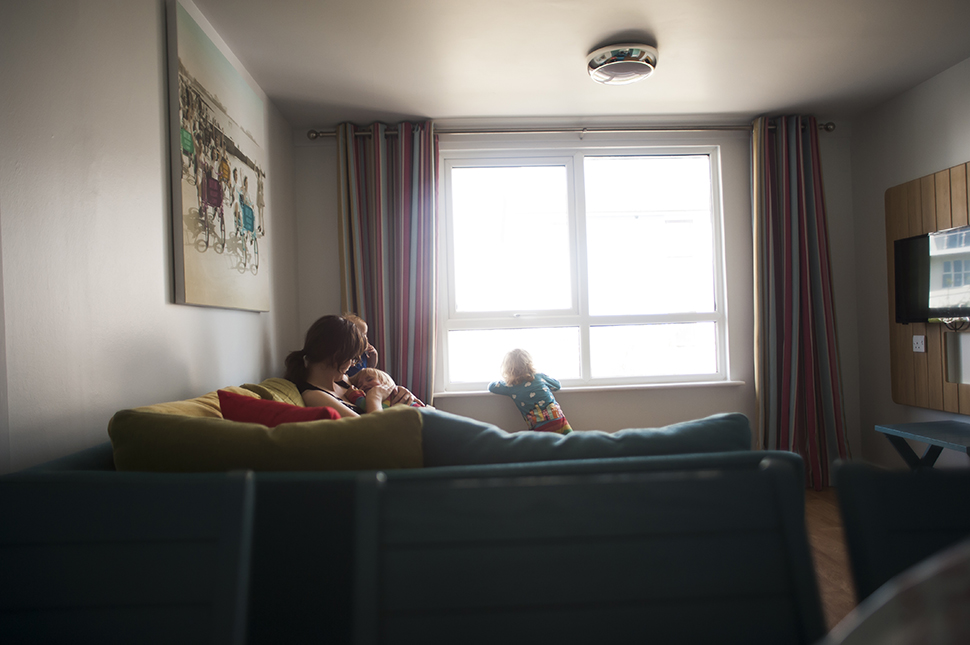 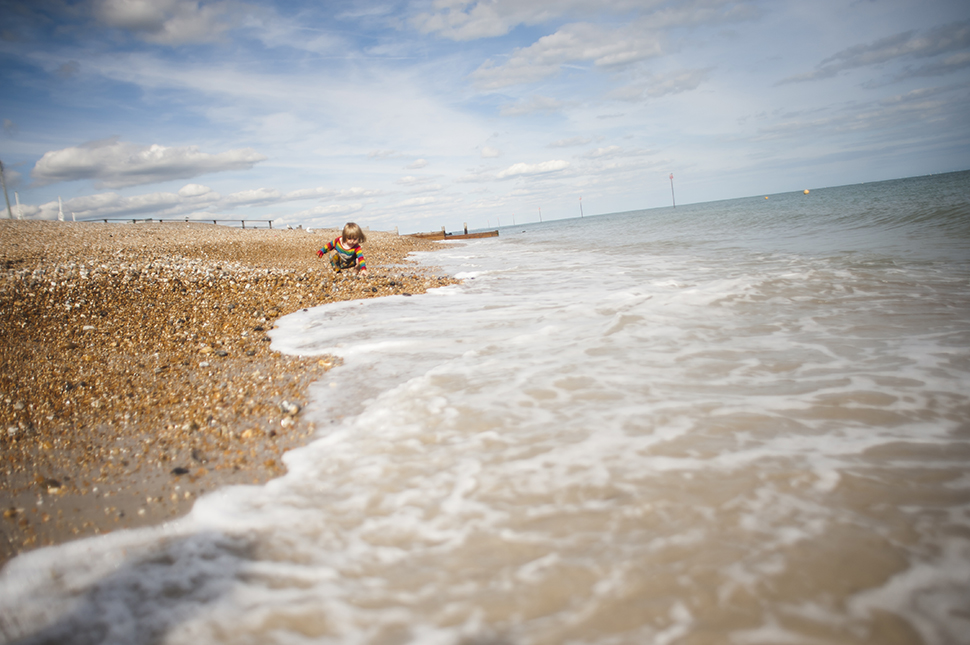 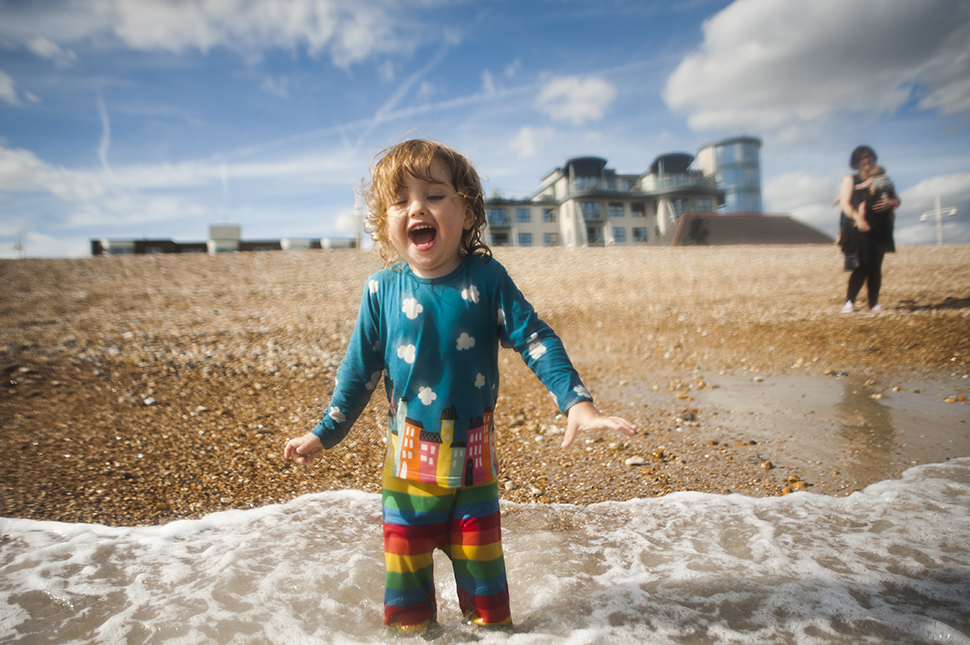 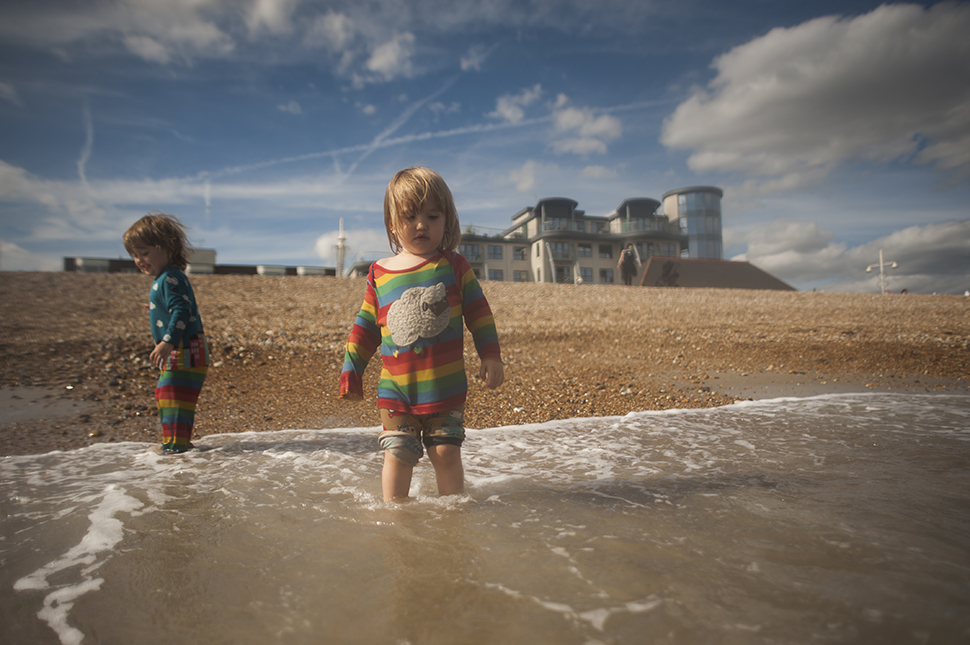 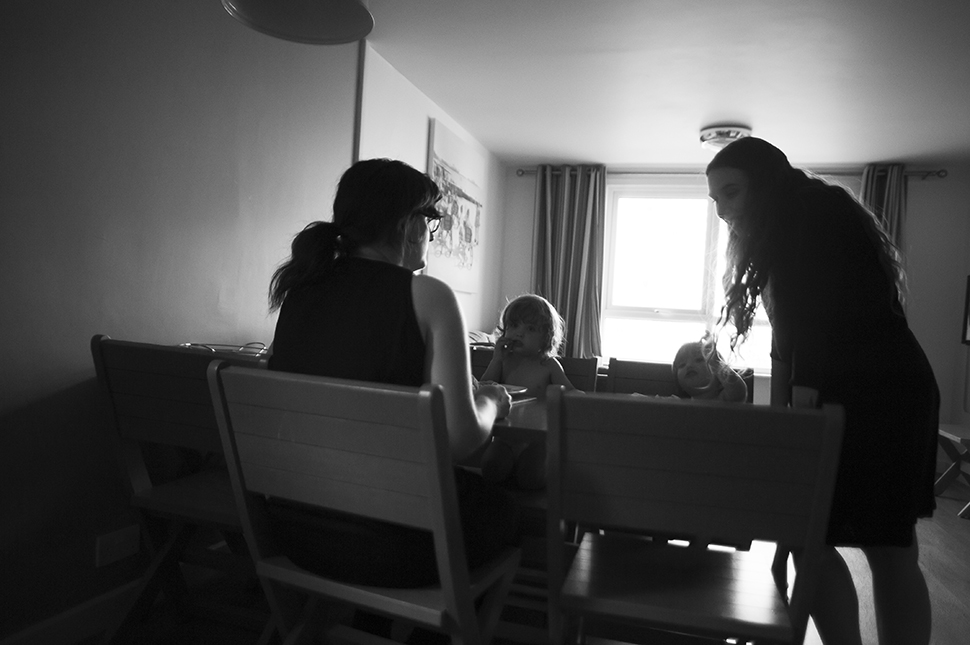 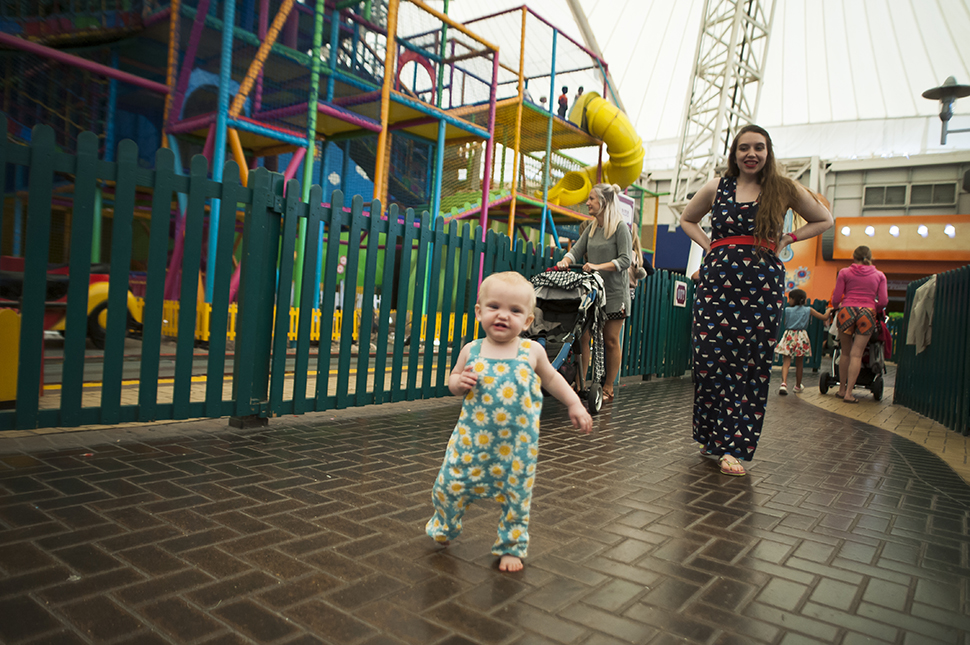 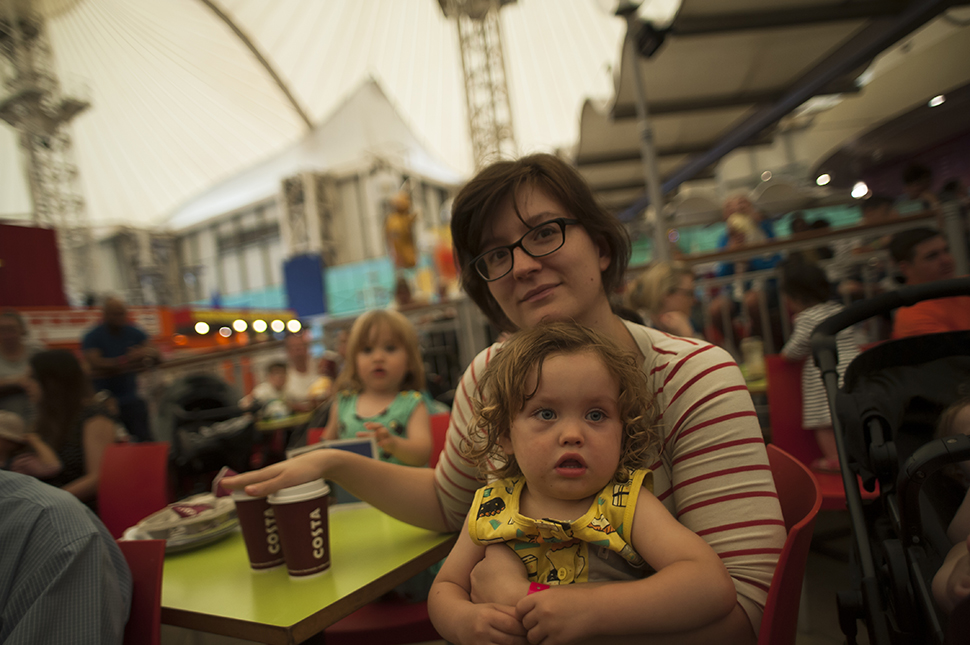 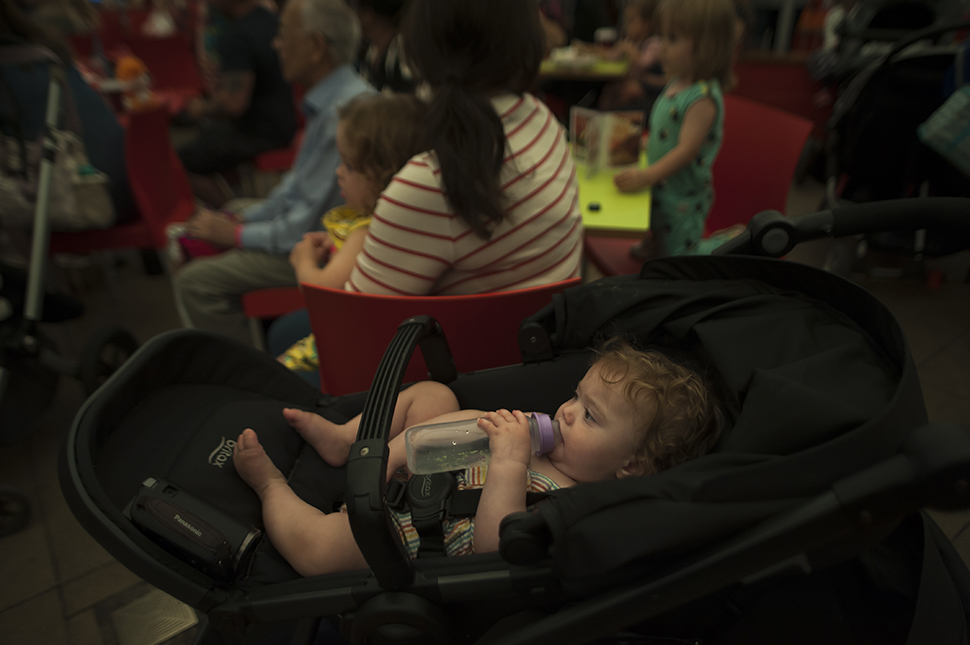 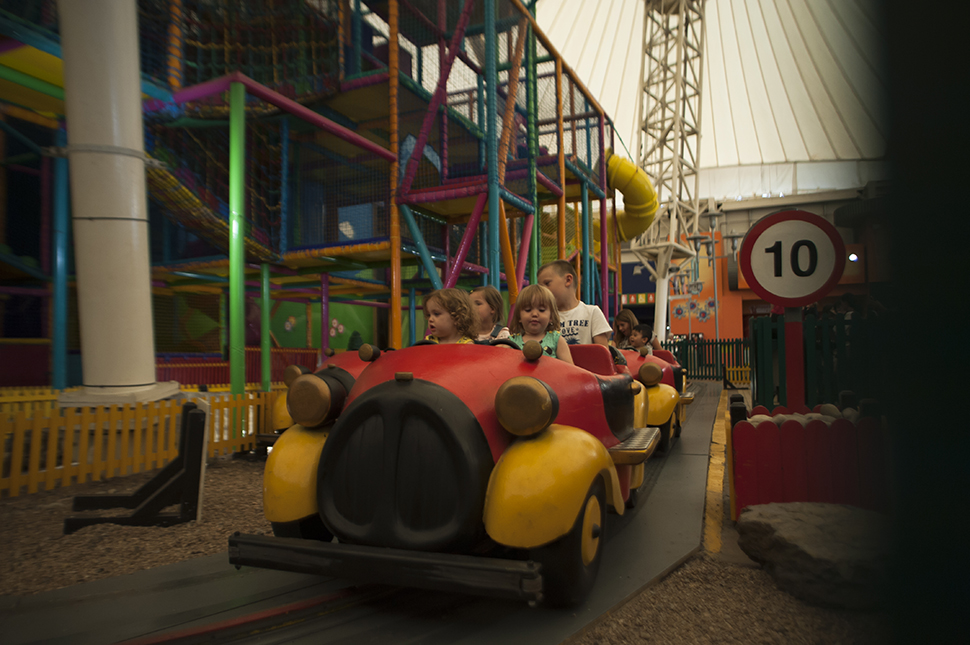 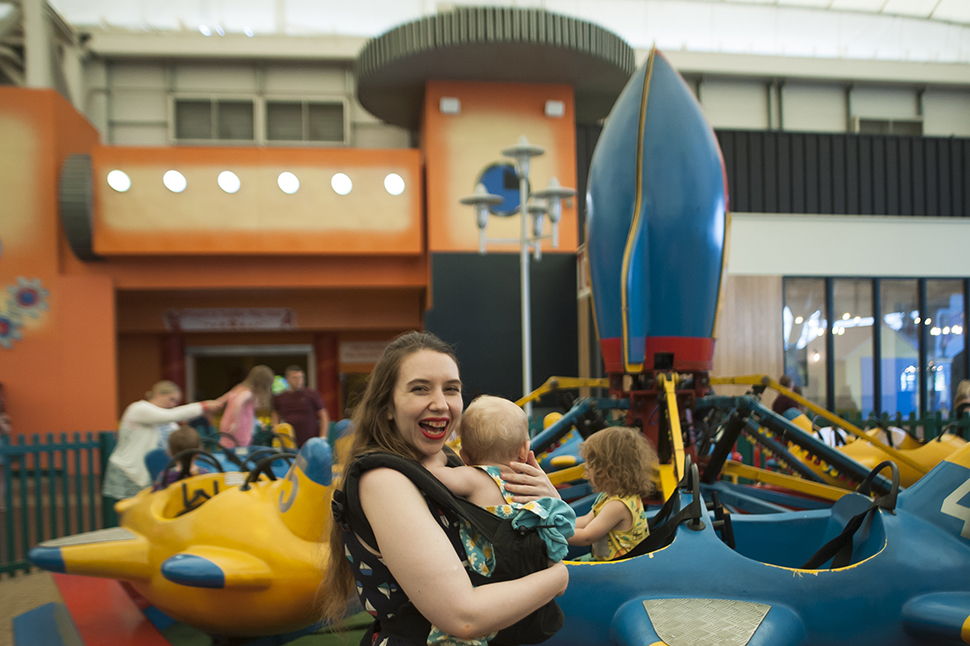 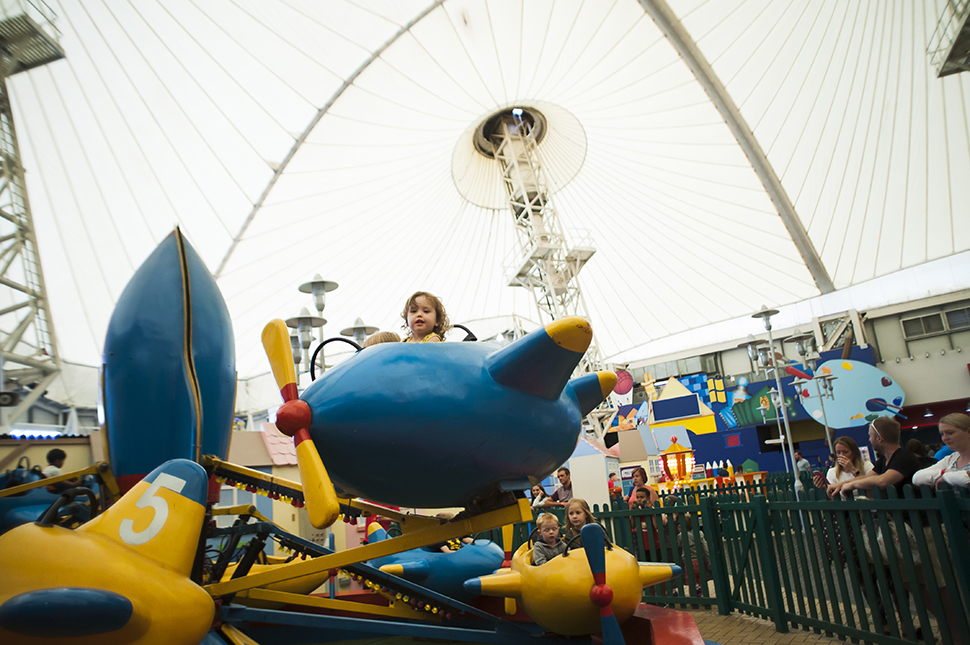 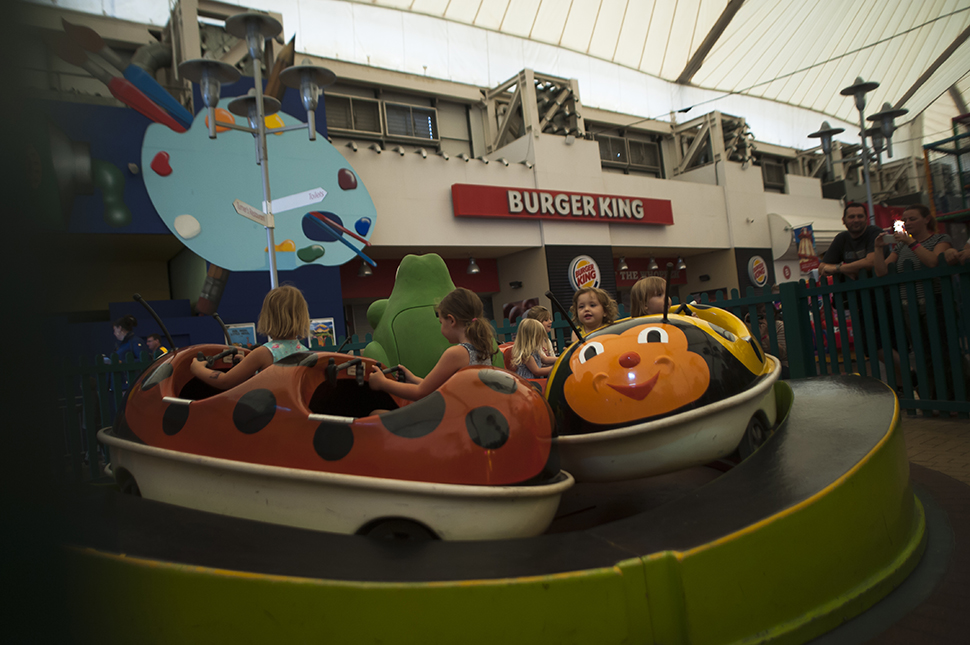 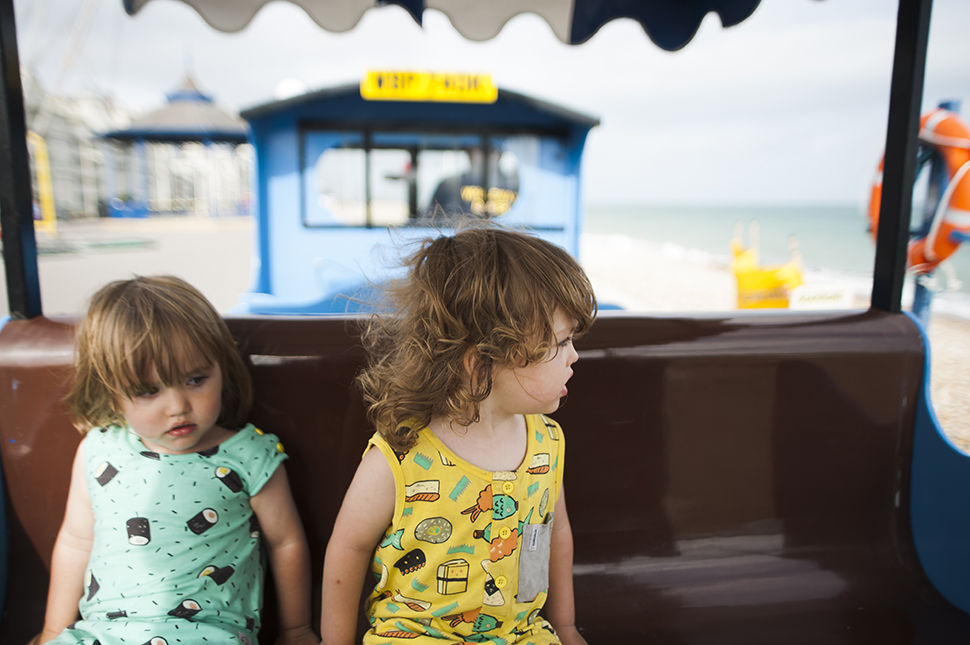 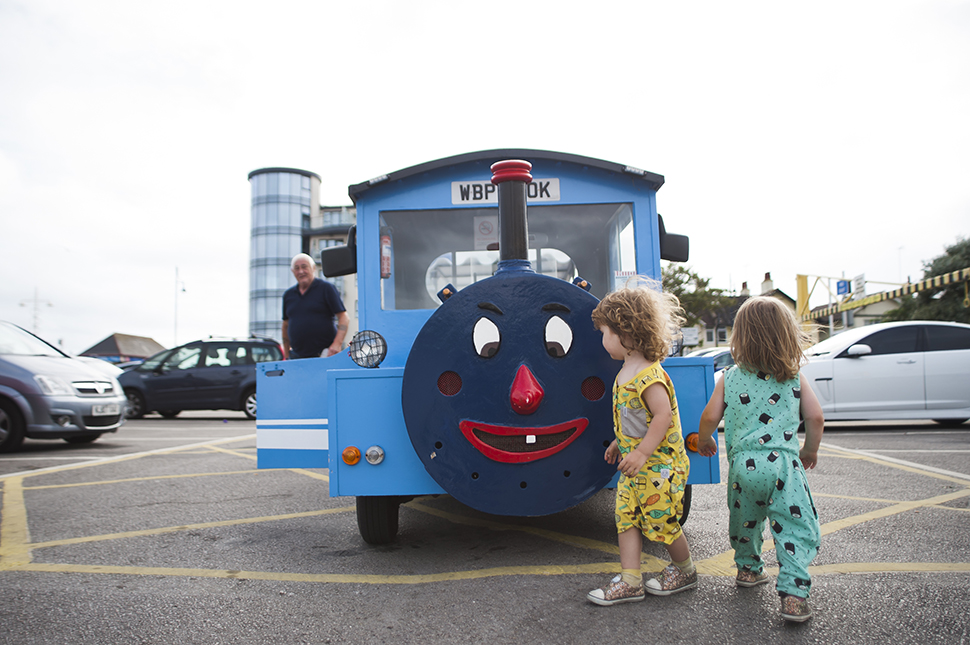 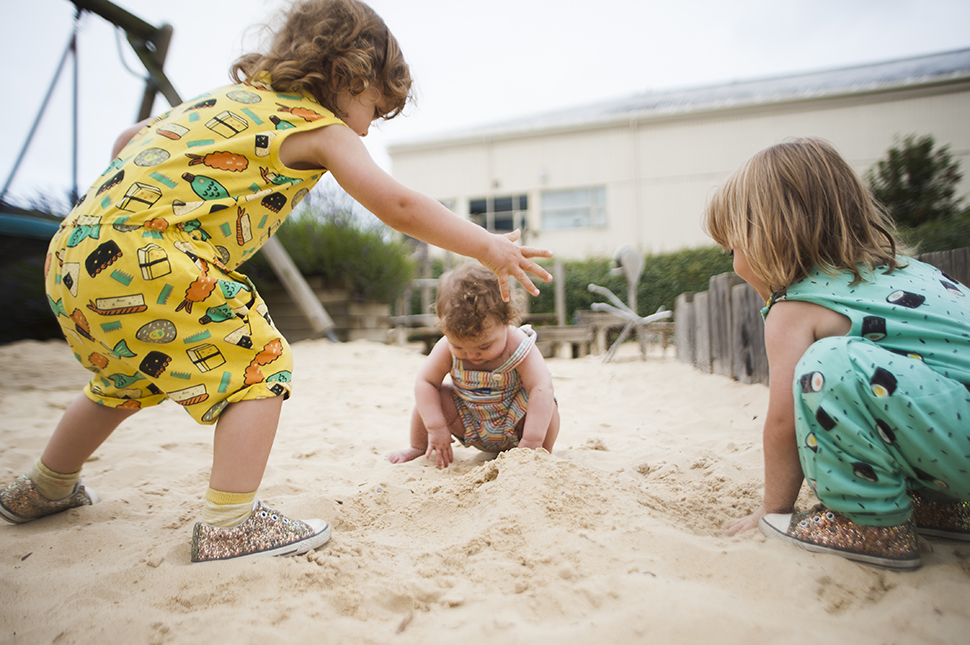 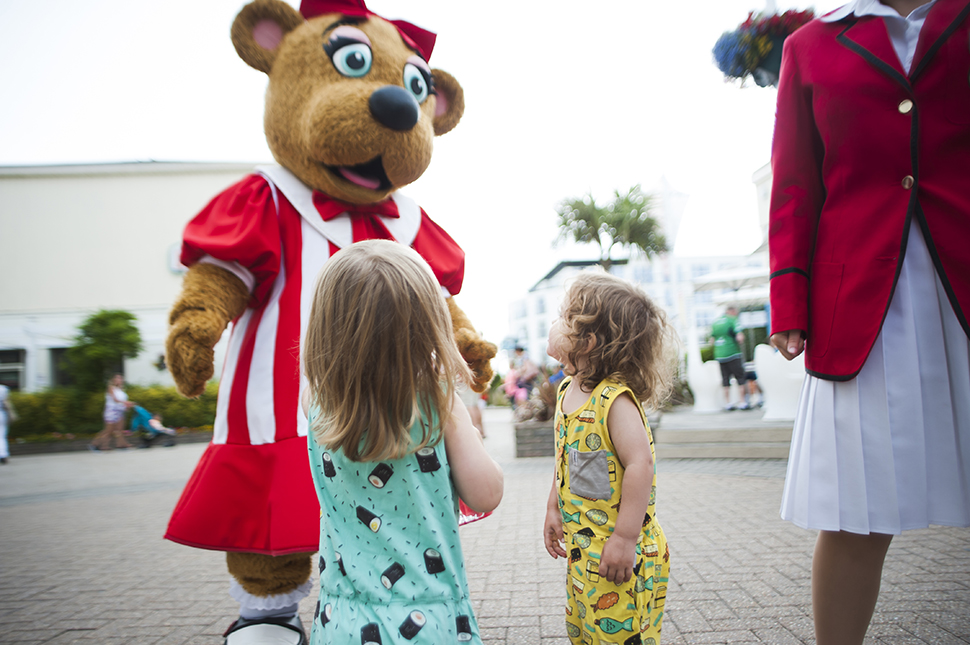 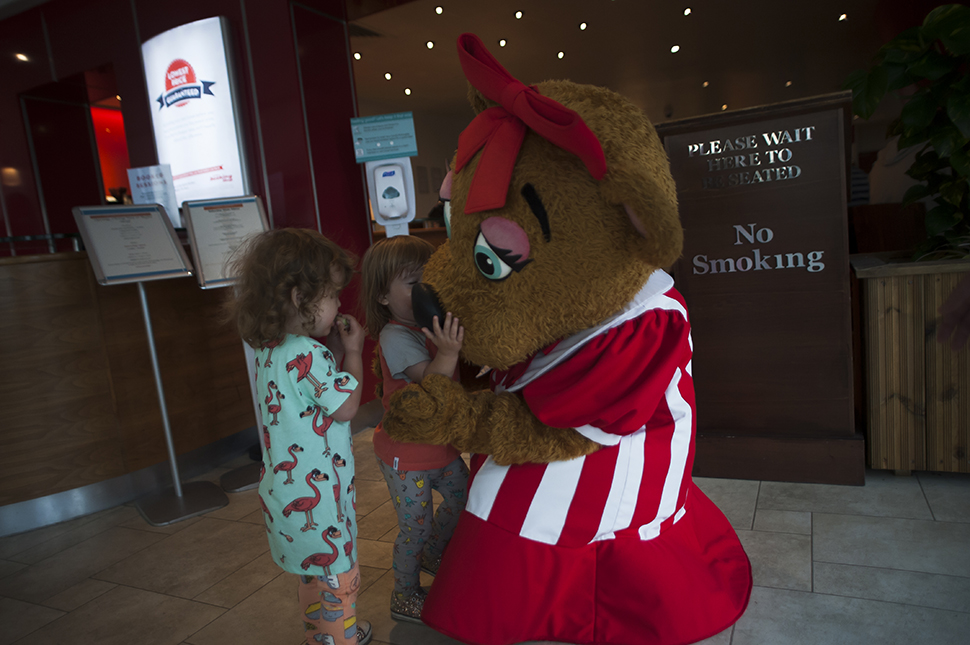 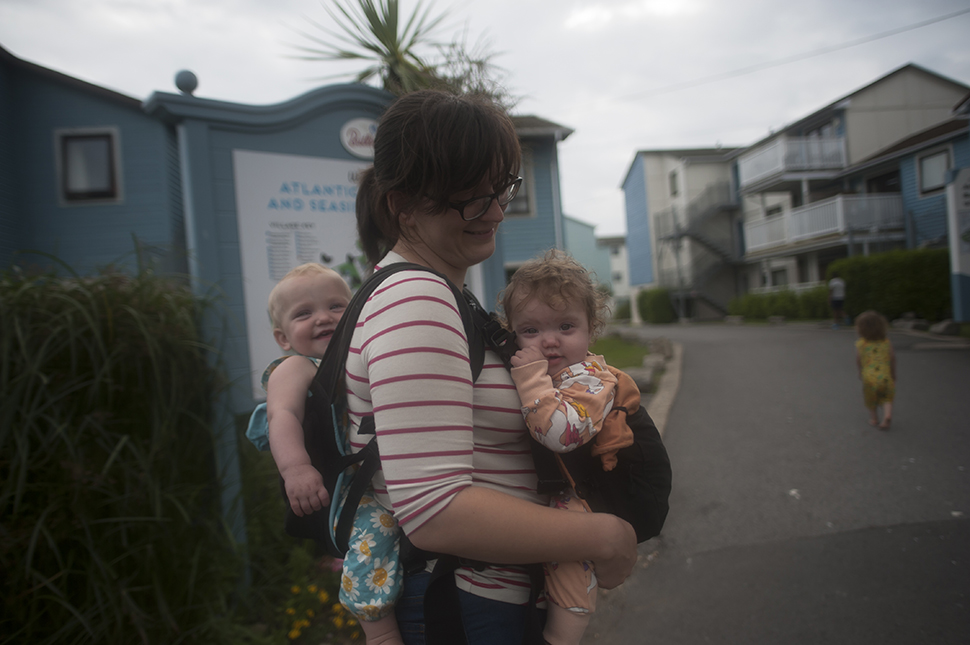 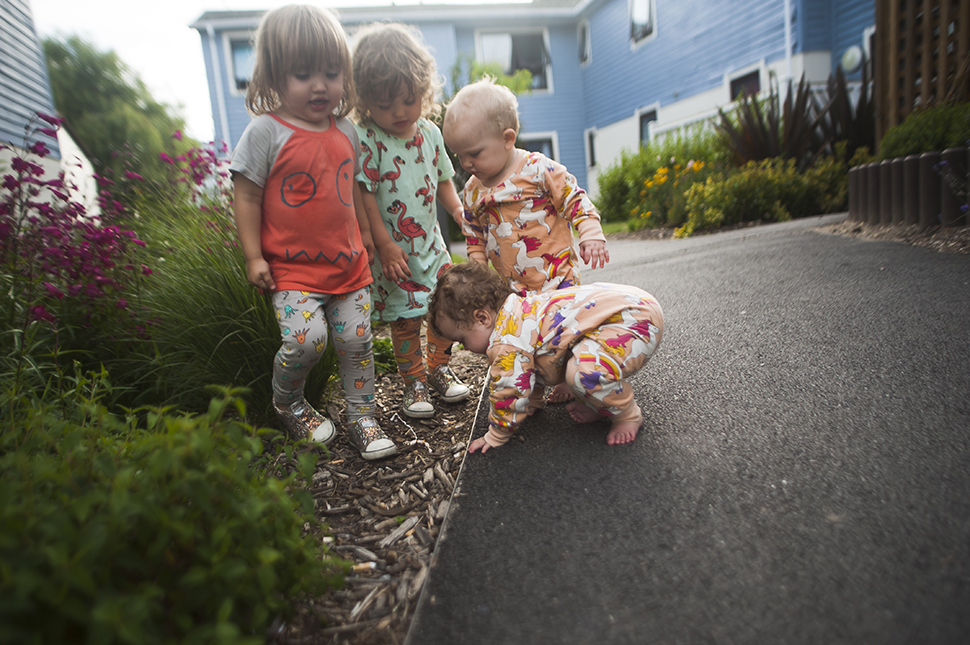 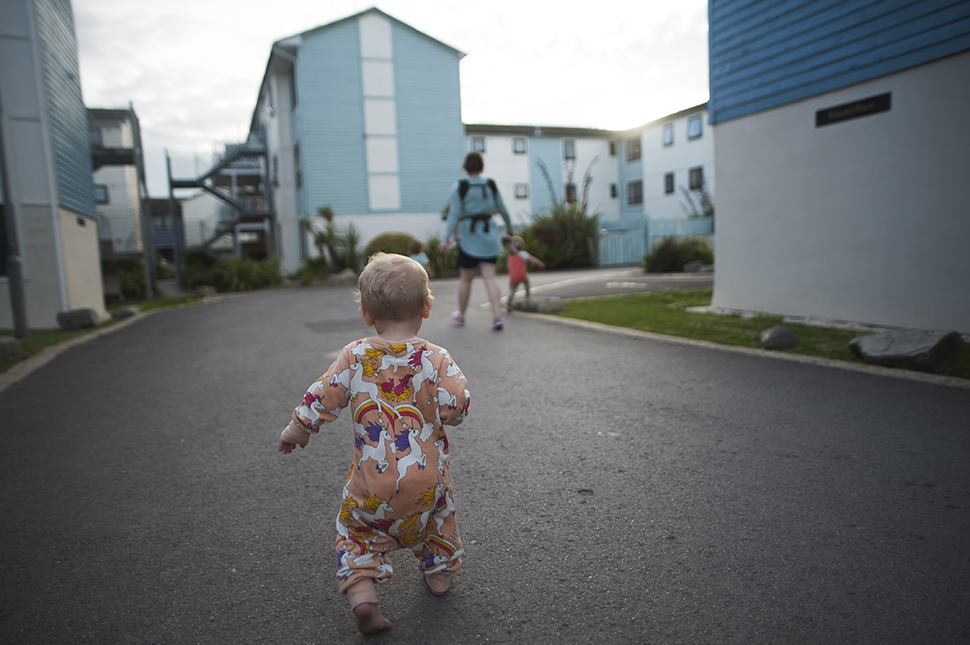 One of my favourite moments from our stay – and one of the most surprising – was watching my sons run up to Billy and Bonnie, the Butlins bears, and stop dead in front of them, just to gaze at them in awe. And then, when they were invited, they flung themselves at those bears for a cuddle. From that moment on, everything we did at Butlins was flavoured by the bears: their second visit to Billy’s Playground was actually the more exciting for the two of them, because the bear sign at the entrance had meaning for them. We meant to go to Billy and Bonnie’s disco on our final night there, but a little misunderstanding as to the location which was ENTIRELY my fault – should have looked on the app! – meant that we missed it.  Whoops!  We did catch a few minutes of Bonnie’s cooking show, which they loved, but by that time of night they were half-asleep on their feet and we ended up having to carry them back to the apartment in our arms.

Speaking of the app, if I had one piece of advice for anybody planning to visit Butlins, it would be to download the app. I loved that it showed what was happening and where, in real time. There is so much to do at Butlins that you really need to plan your day if you want to find time for everything – or alternatively, if you just want to take each day as it comes, that is fine too. There will always be something on and somewhere to go, after all.  My second piece of advice would be, if you have early birds like ours, to try to reschedule them in the days leading up to your Butlins trip so that they sleep in and stay up a little later.  Ours wake at 5am and sleep at 6pm, which didn’t quite align with the Butlins schedule where most activities open at 9am or later and there is still plenty for toddlers to be doing at 7pm.

If I had to improve upon Butlins, it would be that the 18 months – three years age group is more than adequately catered for, and the slightly older children have everything beyond their wildest dreams, but my eleven-month-old ‘toddler’ would have loved to be able to join in and there wasn’t much for her there. Embla, our more sedate baby twin, was very happy crawling about our apartment and spending the rest of her time in her mummy’s arms, in the carrier or the pram, but Olympia really wanted to be down and exploring. This was tricky as she obviously couldn’t ride in the tots fairground without assistance and adults are not allowed to ride, and the playgrounds and soft play were developmentally appropriate for her in all but accessibility – she was simply too short to navigate the ladders!  It would have been fab had soft play had a larger ground level with some slides and climbing equipment so that the smaller toddlers could play with their parents too.

We are already planning our next Butlins trip, as I don’t think that I can rest until we have had a chance to explore the Splash Waterworld. I think that it would be an excellent holiday retreat with extended family or with a group of friends and their children, or on the opposite end of the spectrum as a single parent – there is so much for children to do that really, one can get away with just ferrying them about and watching them whilst nursing a coffee. Kirsty and I loved sharing in new experiences with the boys – a dip in the sea, a chase on the playground – but equally, it was wonderful to just hold hands at the fairground and marvel together as the children we made whizzed around on the caterpillar ride, or to laugh together over a Costa cappuccino whilst the boys bounced around soft play. And if our children were older?  It would only be more perfect.  I can just imagine our foursome in three or four years’ time, exploring the main fairground, the climbing walls, the adventure playgrounds; seeing the shows, disco dancing, staying up late for dinner with their mothers.  And that would be magical too.

We will one hundred per cent be back.  I have no hesitation in recommending a Butlins trip to anybody looking for a fun, active holiday with their small folk.

Of course, words and pictures only tells so much of a story, so we recorded our experience at Butlins Bognor Regis too.  We would love for you to give it a watch and subscribe for more Wilde family content.

Many thanks to Butlins for collaborating with us for a blog review and arranging our stay.