Home Twins The First Trimester the Second Time Round
Twins

The First Trimester the Second Time Round

As I write this I am fifteen weeks pregnant and the first trimester already feels like a distant memory.

I’ve shared previously on the blog how I found out that I was pregnant following our second round of IVF at the equivalent of ten days past ovulation. To be honest even whilst I was taking the test I was preparing myself for a ‘too early’ negative result so it was quite a shock to see the word ‘pregnant’ come up on the test whilst I was still reading the instructions! That was my first real inkling that this pregnancy could be another set of twins. In retrospect, I felt what could well have been implantation cramps twice over and in very different locations, so I suppose that I probably shouldn’t have been surprised.

Symptoms with this pregnancy hit harder and faster than the last pregnancy, at first at least, so that by the time that I saw the positive test my diet had already been influenced by the tiny womb-dwellers’ preferences. In fact, the other items in my shopping basket when I bought the tests (because nobody ever tests just once, right?) were blueberry muffins and pastries. I certainly hope that sweet cravings in pregnancy makes for sweet babies! Unlike with my first set of twins, where I really couldn’t eat at all until about sixteen weeks gestation and lost a lot of weight, this time I only dropped about five pounds and could always choke down a muffin and a glass of fruit juice!

Thankfully at around nine weeks or so the nausea began to receed, just in time for me to put my best foot forward in my new job. These are certainly sensible babies who know when it’s time to give mummy a hand.

The most troubling symptom this time round has been faintness, which I have suffered with quite badly. I’ve learnt after blacking out a few times on my morning commute to just sit down, even if it means sitting on the floor, and quite frequently during the first trimester I had to retire from making lunch or dinner not because of aversions but because if I didn’t put my head down on the floor by choice it was going to end up there anyway! Poor Kirsty has had to really step up and take over much of the food shopping and cooking, much to her dismay as she is definitely not a fan of choosing or preparing food! It’s one of the few things that I do tend to do exclusively about the house – or I did until this pregnancy!

I wanted to be able to report that the first trimester has been a positive time for us but finding out that I was losing my job two days after learning that I was pregnant certainly put a dampener on the experience. I have felt quite fiercely protective of these tiny people from the beginning but I can’t lie, there was a period of time where I seriously considered whether I should have an abortion because it would be so hard to start a new job whilst pregnant and if there happened to be a gap between jobs, a noticeable pregnancy would almost certainly have put potential employers off. It was so hard to even think about it but I did strongly feel that as the sole wage-earner of the family, I had to put my existing children first. Thankfully I fell on my feet big time when I found my current role and was able to continue the pregnancy, for which I feel tremendously grateful.

Finding out that it was twins came as a surprise to me, as it did last time. I remember laughing at the screen, and then swearing, and then laughing some more. We haven’t left the twins yet, either with family or not-family babysitters and we weren’t sure that they would best enjoy the hospital experience and so they stayed home with Kirsty and I went to the scan alone. It sounds like a bit of a lonely experience on paper but actually it was quite lovely to be the only person (aside from the sonographers, of course, but they don’t count) to know that there was not one baby in there but two. I felt very close to them in that moment, which is quite special for me because I haven’t historically been somebody who bonds easily to babies in utero. It was fun to come home and taunt Kirsty with the knowledge that I had seen the contents of my womb, and “Is it one baby, do you think? Or two? Gosh, imagine quads. There could be quads.” As with last time, Kirsty had ‘known’ that it would be twins and so she was giddy with excitement and happiness but completelt unsurprised.

The icing on top of the cake was that these clever, cooperative babies gave us some very clear nub shots and so we have a decent idea of the sexes of these babies. It’s hard not to become attached to what we think they are or to start picturing our family as it could be with these two little people, but at the same time it is all so exciting. 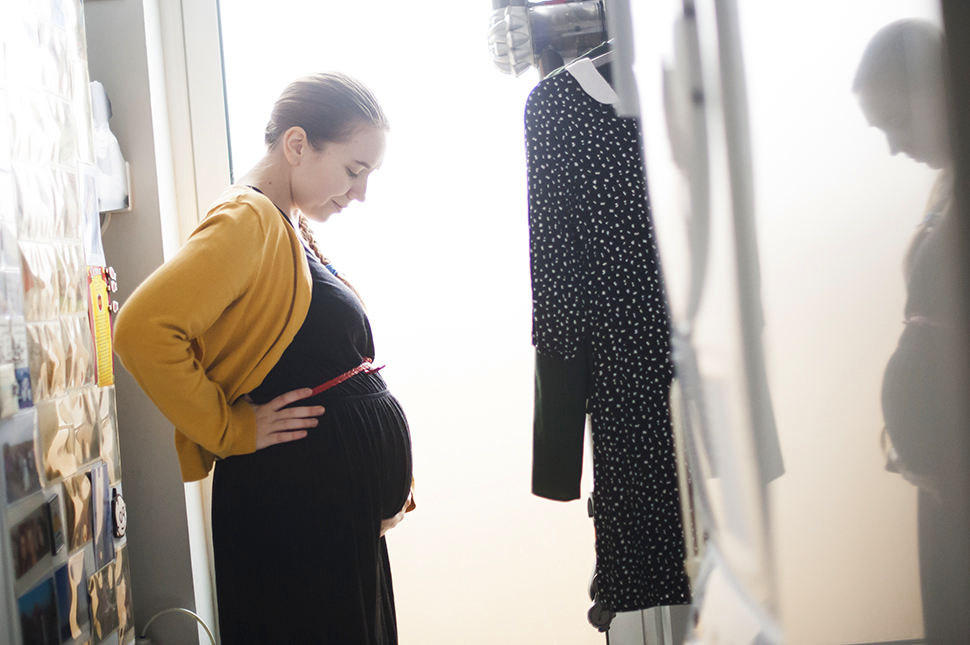 Me at 12 weeks pregnant.

With that, the first trimester ended and we were on to the second!

Do I have any readers with more than one set of multiples?  I’d love to hear what your experience was like!

You have such a beautiful bump. I can’t wait to see how the next 25 weeks (ish) treat you! x

You look so beautiful. Love you xx

Aah this is such a lovely post Amber — so thrilled for you. And I SO wish it were me!! 😉 xx

Exciting times! Bloody well done. Mr Kat had to take over food – it was like that part of my brain just stopped working!