Pampers Made with Love #AD

Families are made in so many different ways these days.

Kirsty has felt like ‘my family’ ever since we met, almost. She burst into my world like a sunbeam and suddenly, everything made sense. We were quite complete even as a duo and never tire of each other’s company; even had we never had children at all, we would have been family. Me and her, her and me. When I was younger, I wanted children in part to cement us, to make it so that we would be irrevocably tied to each other by something stronger than vows. Of course, I wanted to be a mother for all of the usual reasons too, but I have always wanted to be a mother with Kirsty, to share everything with her.  I used to daydream about all of this; the everyday ordinary perfection of nursing our baby in the middle of the night, of taking my children on adventures: trips to see the lambs in spring, splashing and paddling in the sea in summer, autumn leaf fights on drizzly dog walks, visits to see Santa and the magic of Christmas eve. 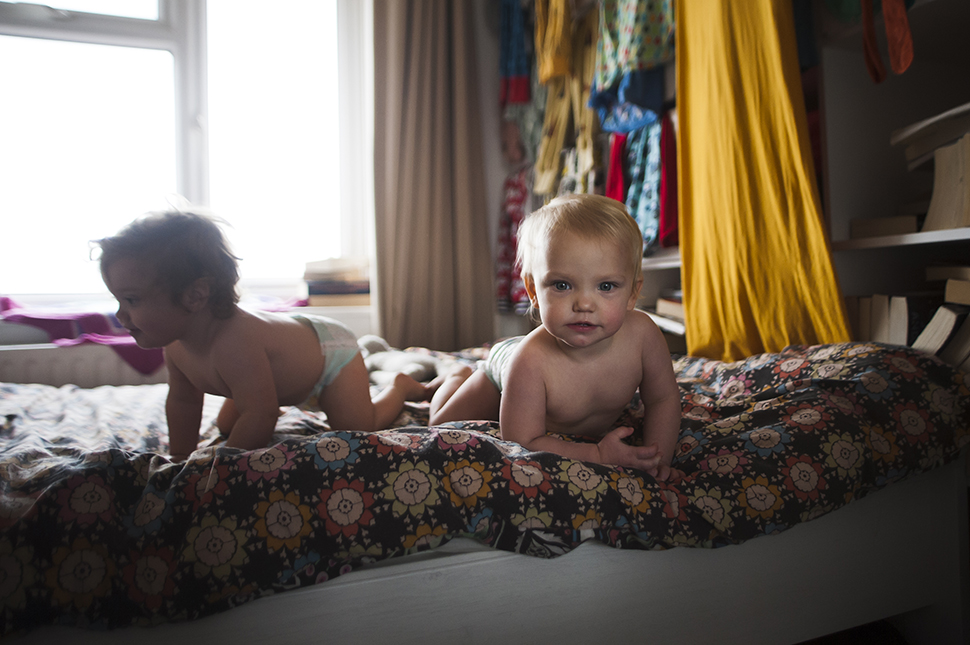 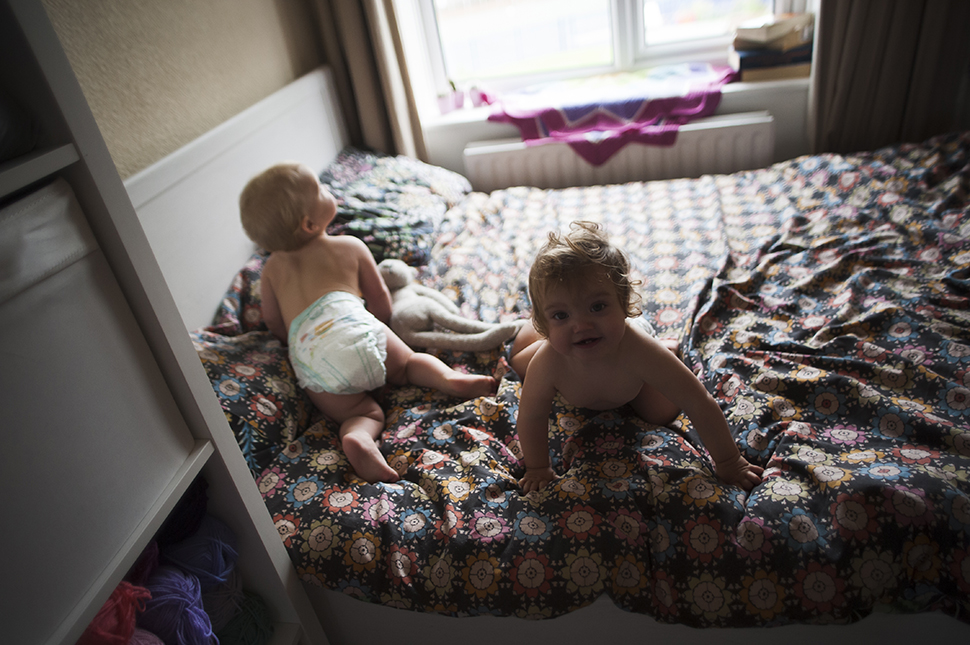 Our road to motherhood was a comparatively easy one, which I’ve spoken about before on my YouTube channel.

After the egg retrieval, I remember sitting on my bed and wondering groggily what my eggs were doing now; whether any of them had fertilised, whether any of them would divide. And then in the week following, anxiously awaiting the phone call each morning for an update as to how our embryos were doing. I felt agonised every time one stopped dividing and we had to let it go, and a curious mix of pride and elation for the ‘best two’, the two that eventually became our sons.  Our embryologist became the most important person in our life; a sort of magician or wizard or god, reporting from a microscopic other world.

We had been staying with my in-laws in order to save enough money to privately fund IVF, so I took the test in their bathroom one morning before work. I dipped the test and then, whilst the little hourglass slowly rotated in its screen, brushed my teeth so vigorously I tasted blood. My hands were shaking and my heart was hammering so loudly in my ears and even though I tried to caution myself, I couldn’t help but think what if, what if, what if. I glanced at the test a few times but there was still the hourglass and every time it felt like an immersion into cold water, because the test was clearly not detecting the hCG hormone that it would if I were pregnant, but then I glanced back again and there it was: Pregnant, 1-2 weeks. It didn’t feel real. My Auntie Becky was in the kitchen and I wanted just a day or so to process the news with Kirsty first, so I waited for Becky to turn to let the dogs out and flashed the test, quite suddenly, past Kirsty’s face. She looked delighted but completely unsurprised, and we exchanged the quickest, tightest hug before I had to leave for the office – taking the test had made me run late! All day long I couldn’t stop grinning like a complete fool. I could hardly believe that there were real, actual humans growing inside of me and that, if all went well, we were going to be mummies.

I loved the excitement of telling everybody. My in-laws knew that we were undergoing IVF, so they were the very first to find out that it had worked and our family would be expanding in the autumn. We had meant to hold off, but when visiting my mum and sister days later, I made too many digs about future grandchildren and my mum outright asked me if I was pregnant – and I am a terrible liar! She was so shocked that she cried, but I don’t think that she was displeased and she said that she was happy for us and gave me a hug. It was my sister’s birthday, and actually, I had form for stealing the thunder at parties that year because I announced that I was having twins on my mum’s birthday too!

One day, inside of me, their tiny hearts began to beat.

I shan’t retell the story of my pregnancy with the boys; you’ve probably read it before.  But even though I enjoyed my pregnancy very much, these boys didn’t feel like ‘mine’ until they were quite a bit older – in fact, they were walking and talking toddlers before I felt truly bonded and now that they were almost three, I can confidently say that I have never loved anything in my life in the same way as I love those four children. The other day, Balthazar turned to me and said ‘You my best friend’, which is what I tell them all the time, that they are my best little friends, and I felt as though my heart might truly explode.

Our daughters were conceived two days before the boys turned one. We kept that round of IVF quite secret, and nobody knew as they helped us to celebrate with our baby boys, that in a quiet room in London, their siblings were slowly and busily dividing from one cell to two, two to four, all the way to three hundred-celled blastocysts, two for then and two to freeze for later. It felt quite strange to blow out candles with our baby sons, knowing that their little brothers or sisters were in the earliest stages of being.

I have always believed that the best things in life are worth fighting for, worth bleeding for, and for families like ours there is a fight.  Gay women do not accidentally become pregnant.  There is no surprise second line on the test for two-mum families.  We plan, we chart, we hand our fertility and our hearts to the kindness and expertise of our doctors and if we are lucky, miracles happen.  Families like ours are made with love; from the decision to create a baby on our parts to the hearts and souls, the coffee cups and exhaustion and the years, that transforms an eager adolescent to a fertility specialist, a doctor or an embryologist or a nurse.

I have sobbed at the moment of birth with each of my four children, with the sheer and unadulterated wonder at those first newborn cries.  There is nothing quite like staring down at a brand new tiny human, memorising their small features as they curl and uncurl their whole hand around your finger.  It is magical.   I wanted to be a mother so badly even when I was a child myself and here I am, twenty-eight-and-a-half with four perfect children and two frozen in time, all thanks to modernity, love and expertise.  I will always be grateful that our road to motherhood was an easy one. 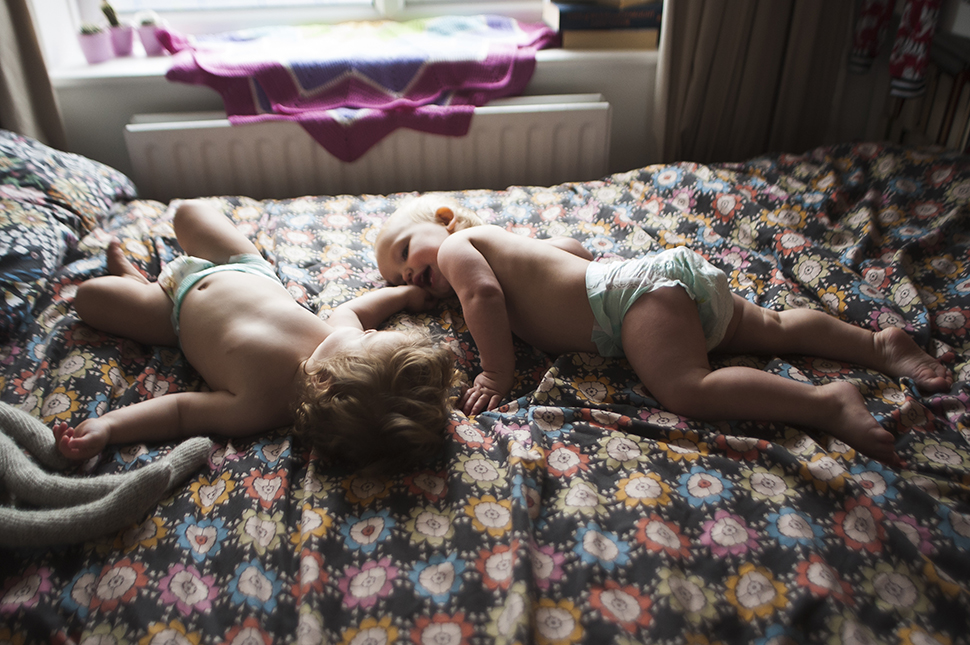 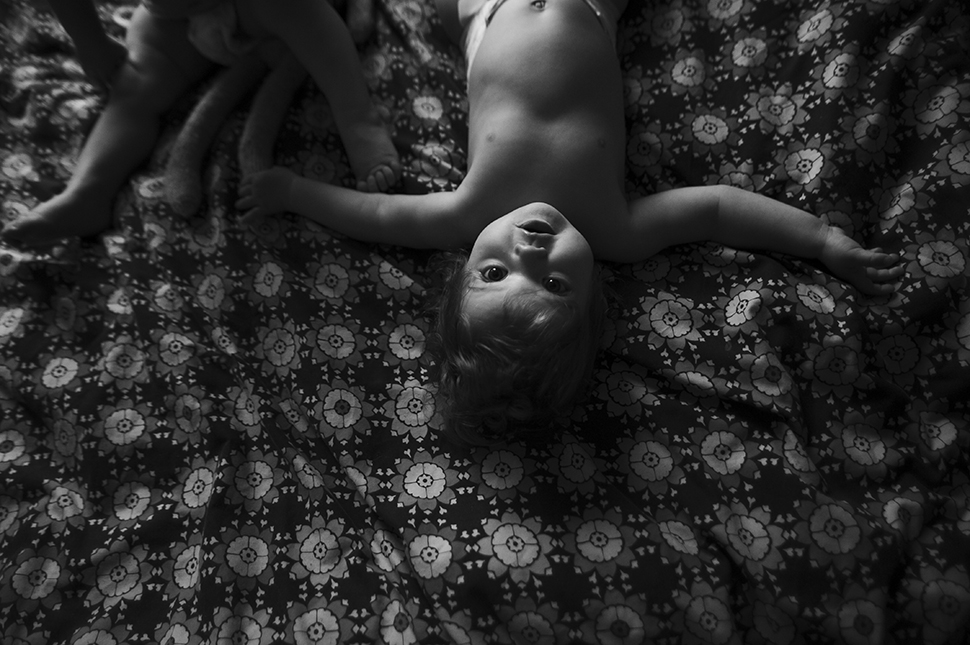 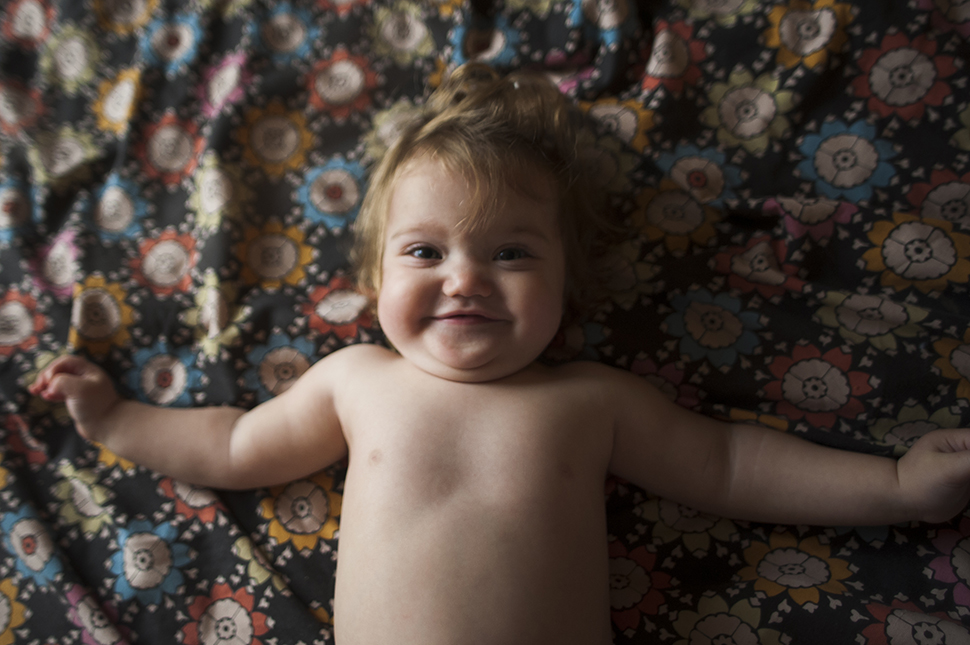 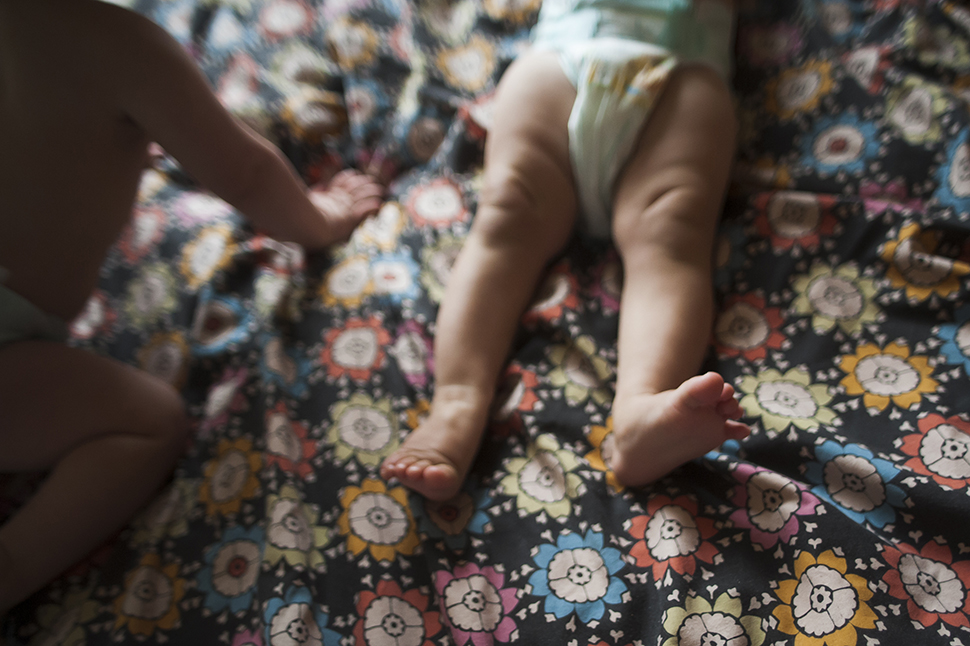 I love them so much.  My mother used to tell us that she loved us to the moon and back, and I think it’s such a beautiful visual but also perfectly illustrates how I feel about these two little girls and their slightly-bigger brothers.  I want to give them the world.

Recently I’ve been talking with Pampers, the nappy brand, about what they do and what makes them different to other nappy companies.  For instance, much like my outsourced fertility, Pampers nappies are made right here in the UK so that the brand can keep full control of the production process.  It takes twenty-eight people to make one single nappy like the ones that you can see in these photos, and no fewer than thirty-three people check the quality of each nappy to ensure that it is comfortable for those delicate little bottoms.  They check over 1500 nappies by hand every single day, using 130 different test methods and 24,000 measurements.  And as over 80% of the Pampers production team are parents themselves, they know firsthand how important it is that a baby’s nappy fits well, is soft and absorbent and protective of their skin.  Perhaps that love and attention to detail is why Pampers is the only nappy recommended by the British Skin Foundation.

As you can see from the pictures – and there are loads more below so scroll down for more adorable twin pics – babies Embla and Olympia were super comfy bouncing on their mummies’ beds in their own Pampers nappies.   I never thought that I would be terribly bothered about what my babies wear beneath their clothes but it literally makes the difference between a happy baby and a grumpy irritated one and, where leaks are concerned, between a good day out and one cut short by spoilt clothing!  They say that motherhood transforms you in so many little, unpredictable ways and for me, this was definitely one of them.

We try to do everything with intent and to be mindful about all of our choices, from the romantic to the fun to the practical – like, indeed, what our daughters wear between their bottoms and the Mini Rodini.  My babies, my family, my nappies.  Made with love. 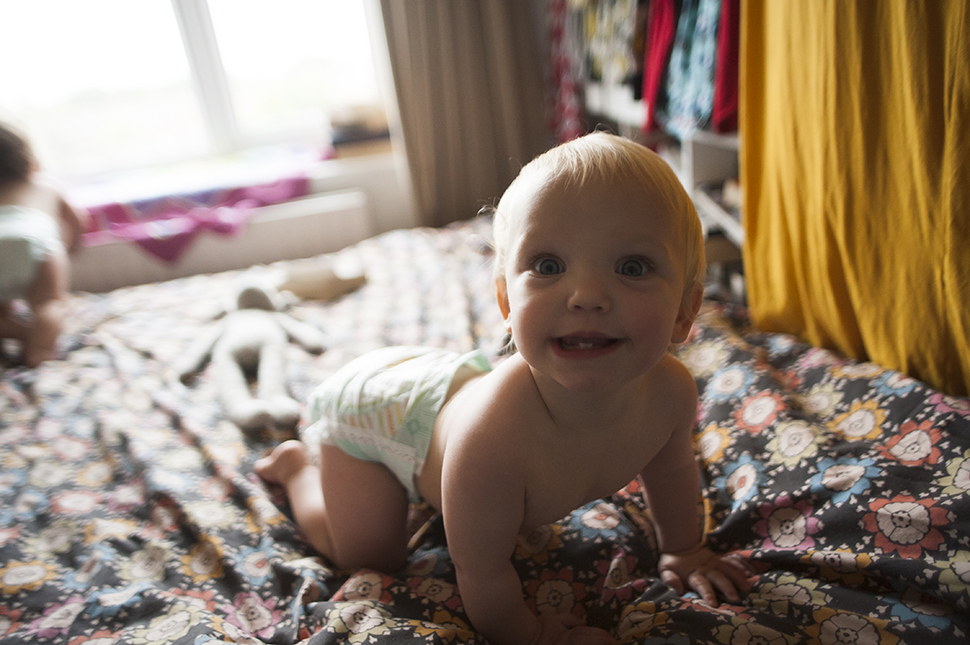 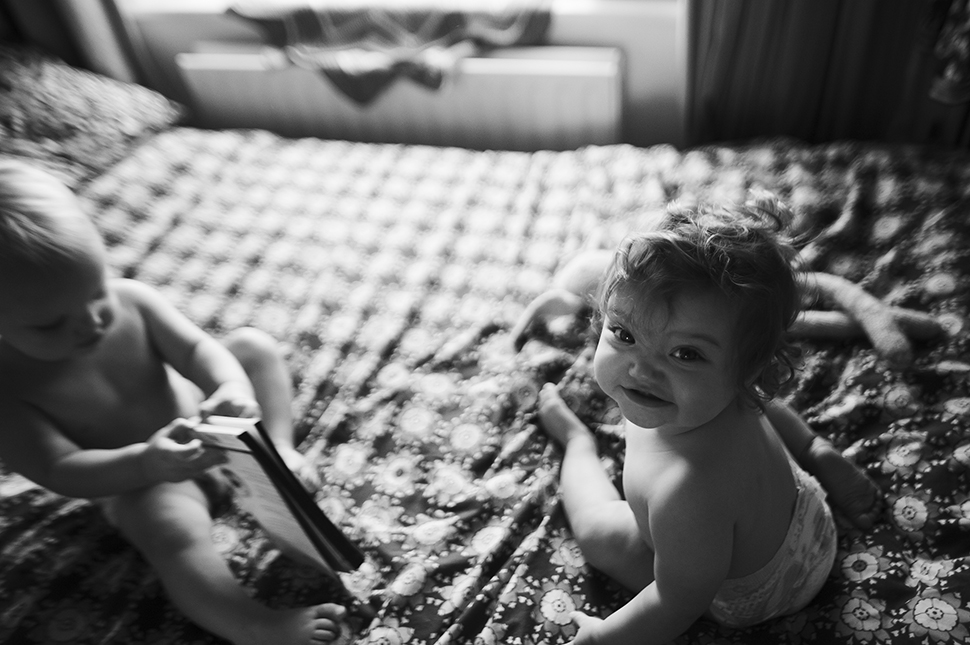 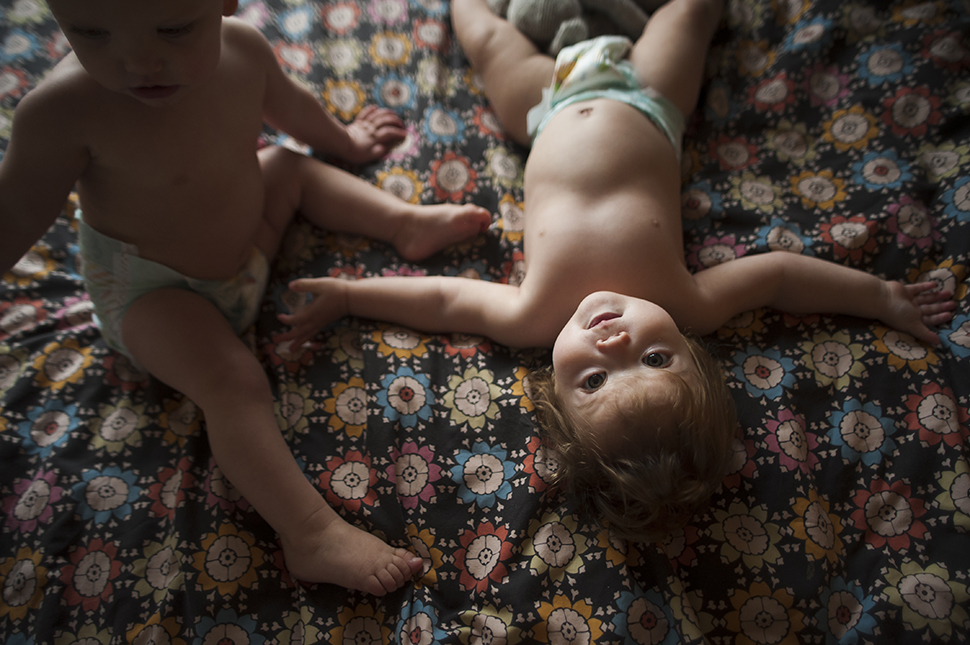 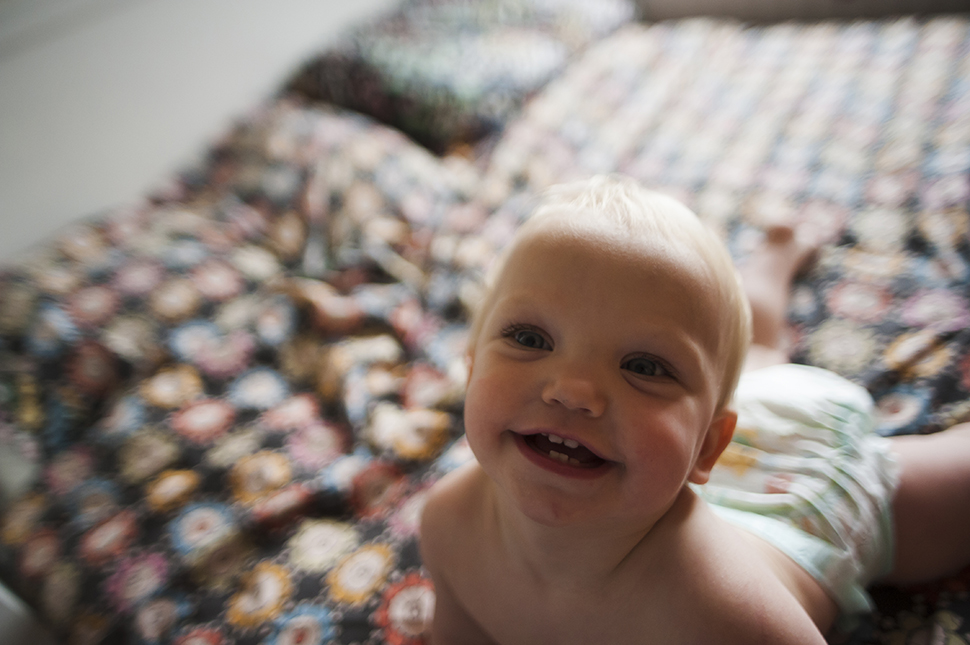 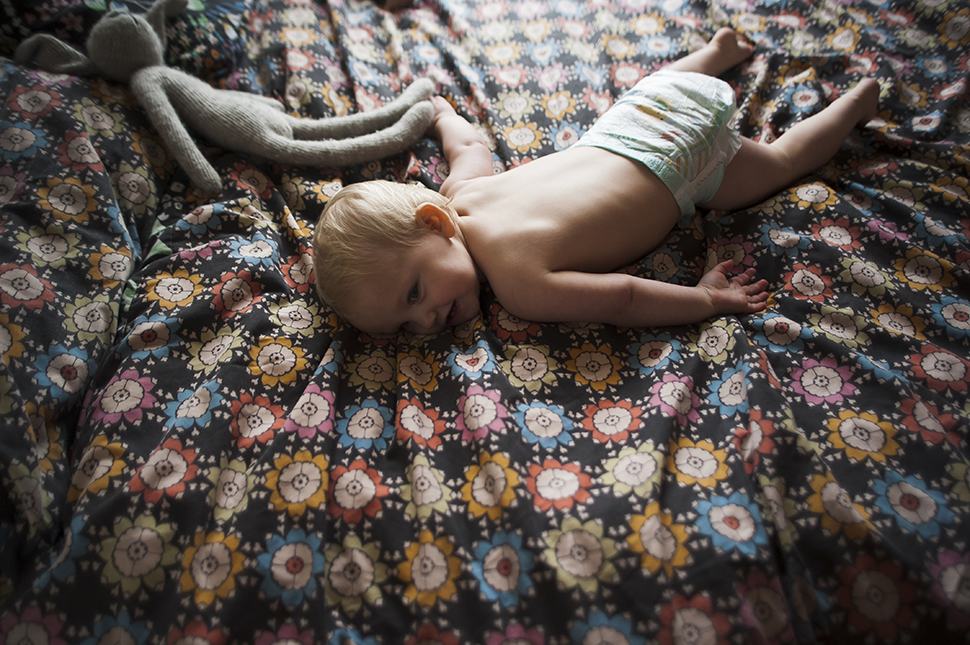 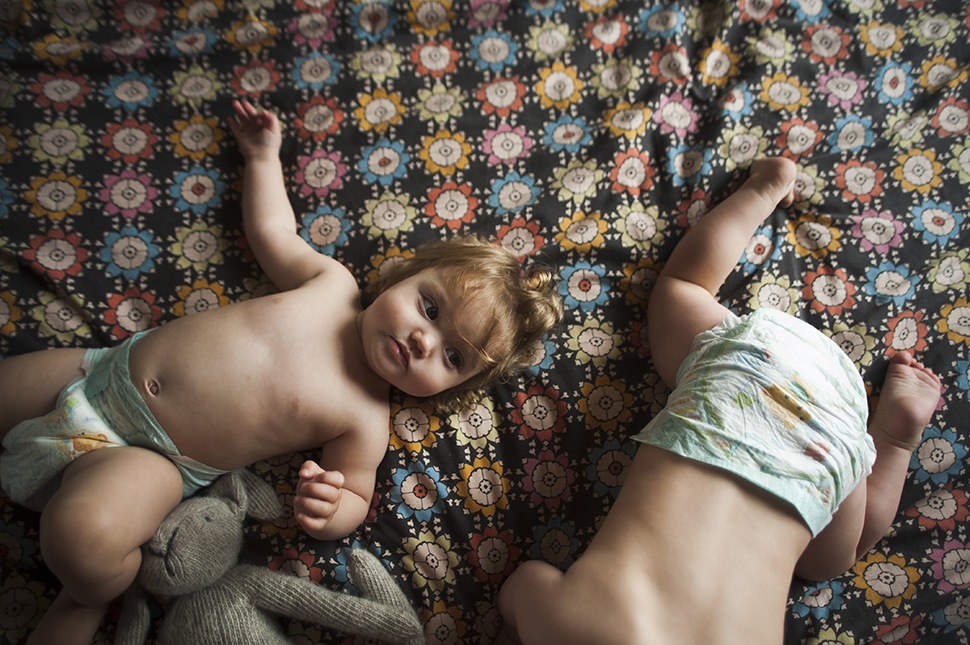 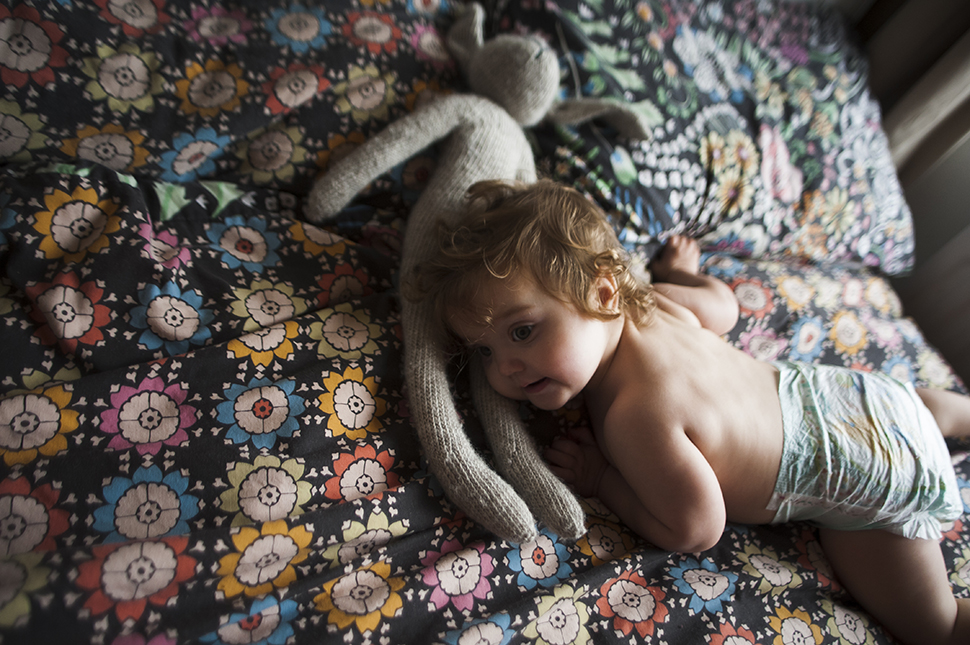 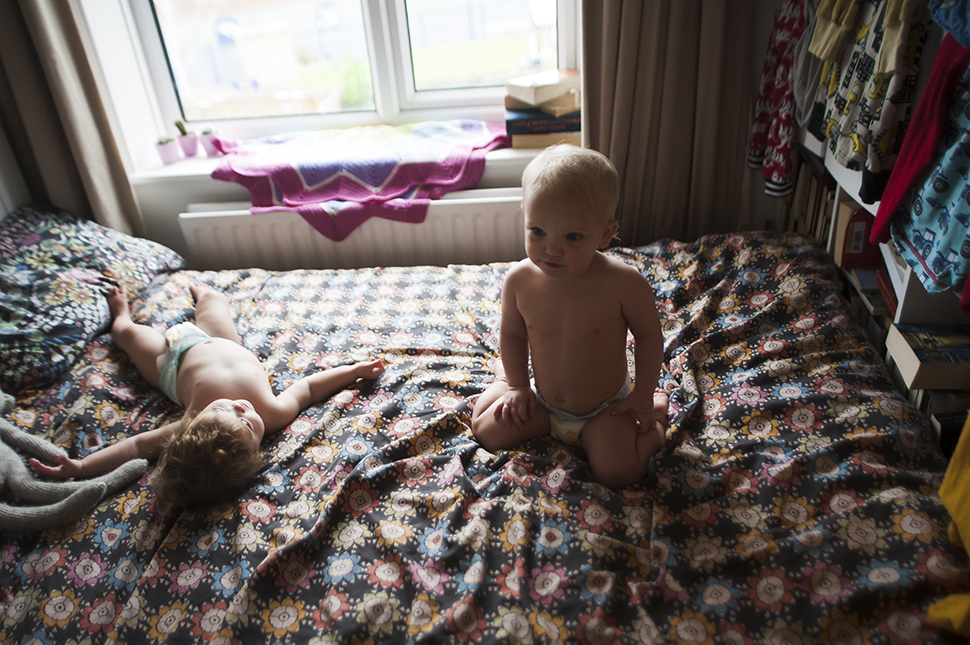 This post was drafted in collaboration with Pampers, but all thoughts are – as always – my own.

Aw This is such a lovely story. I’m always fascinated by other’s conception and family stories and I always admire yours. It’s such a journey making a family and then you want to do everything to protect them. Absolutely gorgeous pics as well 🙂 xx

That’s such a lovely story, and what beautiful babies! <3

Just the sweetest, dearest snaps. I’m 34 weeks today with our IVF babe (just one boy) and it feels as though I’ve been pregnant for my whole life — and for about five minutes. I want to speed up time to meet him, and to try to enjoy the closeness of carrying him at the same time.