Photography can make or break a blog.  Nothing gives you or your readers more insight into you or your lives than a series of well-executed photographs.  On a personal level brands and PRs often remark, when opportunities are afforded to me, that they selected my blog because they had confidence that my photography would show their product or service off both accurately and flatteringly.  If you would like to increase your readership or enhance your blogger/brand collaboration opportunities, perhaps you should take a look at your blog photography and consider whether it is working for you or whether there is room for improvement.

A DSLR camera is a vital component of your blogging tool kit but in order to maximise its effectiveness you also need to be comfortable with its use and au fait with a good editing program.  In this blog post I am going to explain to you precisely why you should shoot in RAW, and walk you through a simple RAW editing workflow.

RAW format is a file type like .GIF or .JPEG.  If you shoot with a Nikon, like I do, your RAW files will be labelled .NEF.  If you shoot with a Canon, the RAW file format is called .CR2.  Some people consider RAW editing to be more complicated and avoid it; twice recently, bloggers have confessed to me that they too shoot in RAW – however, they then become overwhelmed and convert the images to JPEGs before attempting to edit them!  This is WRONG WRONG WRONG when RAW is so easy if you only know how.

Photographers shoot in RAW because it provides greater control over the resulting image.  When you shoot in RAW mode you tell the camera not only to capture the picture as according to your settings but to save any information related to the environment.  This means that you can go back in to the picture and edit features such as the exposure and white balance without losing image quality.  The resulting files are vast in size compared to a JPEG – 10mb to 20mb seems to be the norm – but choosing RAW means that you can be more relaxed about the photography itself because almost any mistake can be corrected.  So long as you get the picture in focus, you have a workable image that can be corrected and improved upon in Photoshop.

You can download Photoshop for less than £10/month so if you haven’t already, go and do that now.  I promise that it’s more than worth the investment.

For the purpose of this demonstration I will be using this image of my partner and one of our little boys, shown straight out of the camera (SOOC) here: 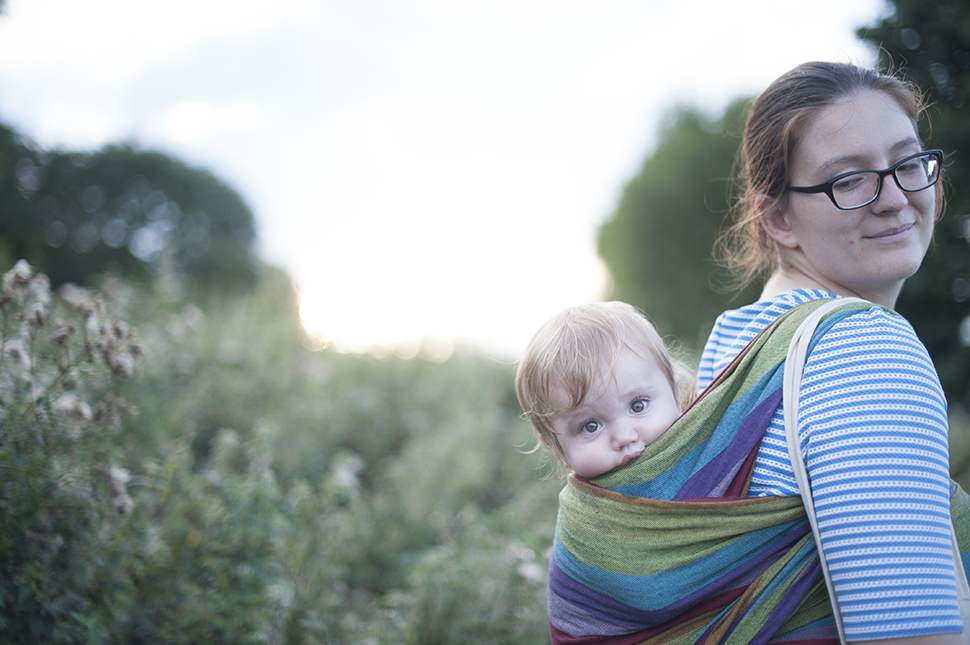 And walking you through my editing process to make it look like this: 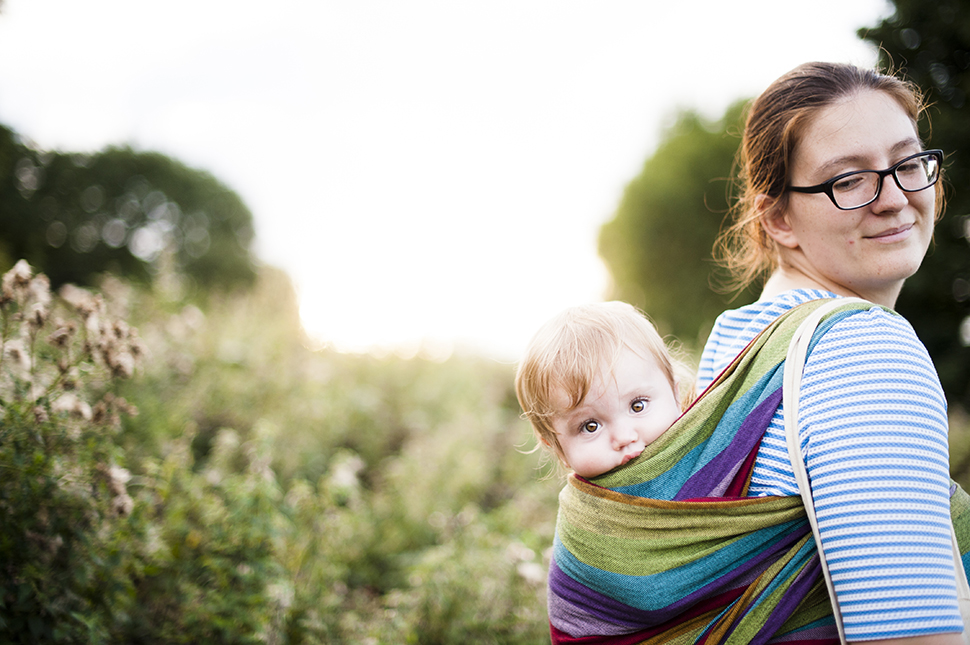 Looks much better, doesn’t it?  And with my editing process you can achieve this look in under five minutes.

Step One: Open your RAW Image

Open your SOOC RAW image.  You can do this by double-clicking the file, which will open Photoshop.  Photoshop automatically recognises RAW images and will open its internal RAW editing programme.

As far as unedited files go, this SOOC image has a lot going for it.  It was taken about thirty minutes before sunset on a pleasant summer’s day, which is the optimum time for photography, and has lovely creamy backlight, which means that the sun was behind my subjects at the time that the picture was taken.  There is potential in this image.  But it looks a little cold, a little dark, and altogether rather more bland than I remember the scene looking before I put the camera to my eye and pressed the button.  No matter, because in RAW mode we can fix all of that.

Step Two: ‘Warm Up’ the Image

Unless you have trained your eye to see it or you have the same image post-edit to compare then it’s difficult to tell when an image is too cool.  It’s safe to assume however that the typical photograph taken outdoors will need to be ‘warmed up’ a little. 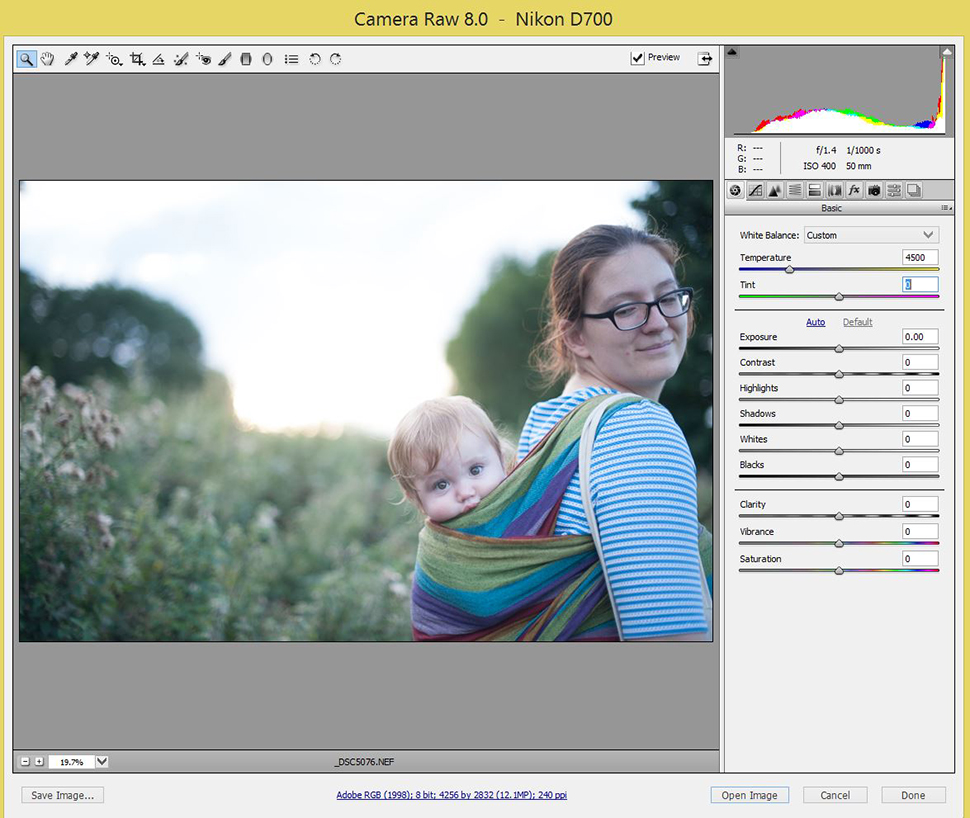 To warm up the image, adjust the ‘Temperature’ slider to the right, increasing the number.  There is no magic number for this as it varies according to the image, so stop when the image looks warm but before it looks yellow.  The best way to tell this is to find something white in the image.  Before the edit it will look a little blue, and if you go too far with the slider it will start to tinge yellow.  Stop when it is a perfect white. 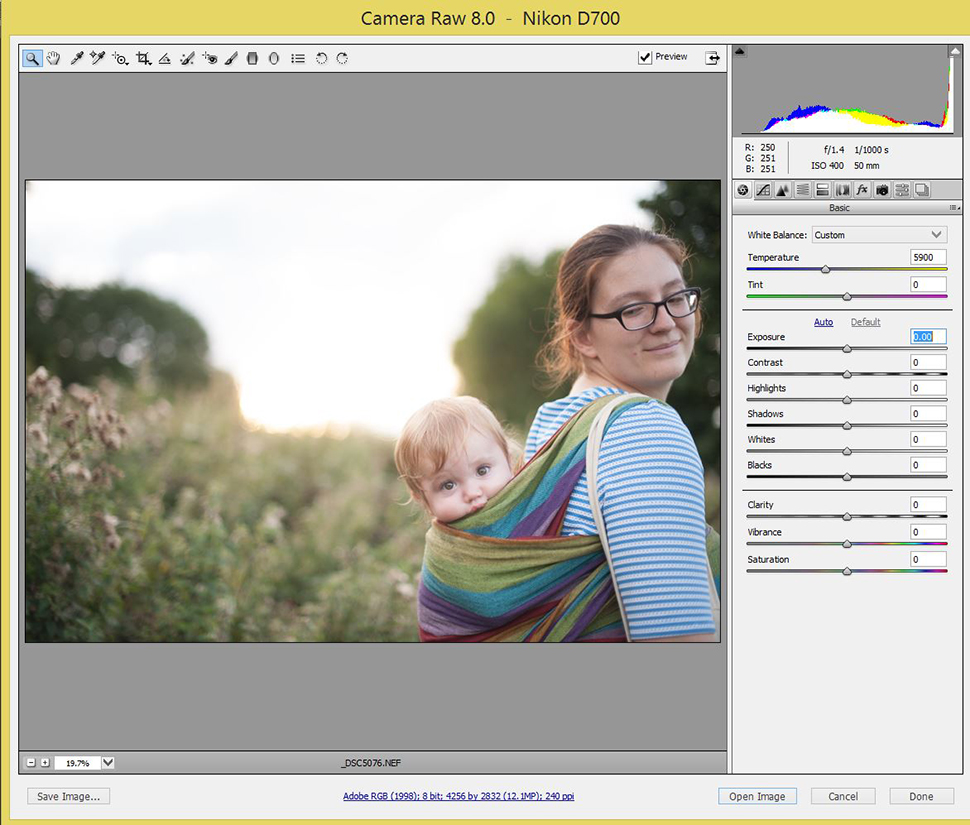 This is my image with the temperature corrected.  Nobody looks like they have hypothermia now.

Do you see how this image looks a little dark?  This is because it’s slightly underexposed.  My preference is always to slightly underexpose my images and then fix them in Photoshop rather than waste time adjusting settings when I could be photographing wriggly babies.  It’s a simple fix though.  Take the ‘Exposure’ slider and again, slide it to the right.  If your image is overexposed, with bright white patches where there should be detail, slide to the left instead of the right.

Exposure for an unedited image is always 0.  Again, there is no magic number to fix the exposure, you just have to stop when it looks right.   Ideally you want the image to look clean and light, but not so much so that it is ‘blown’ – that you lose detail on your subjects. 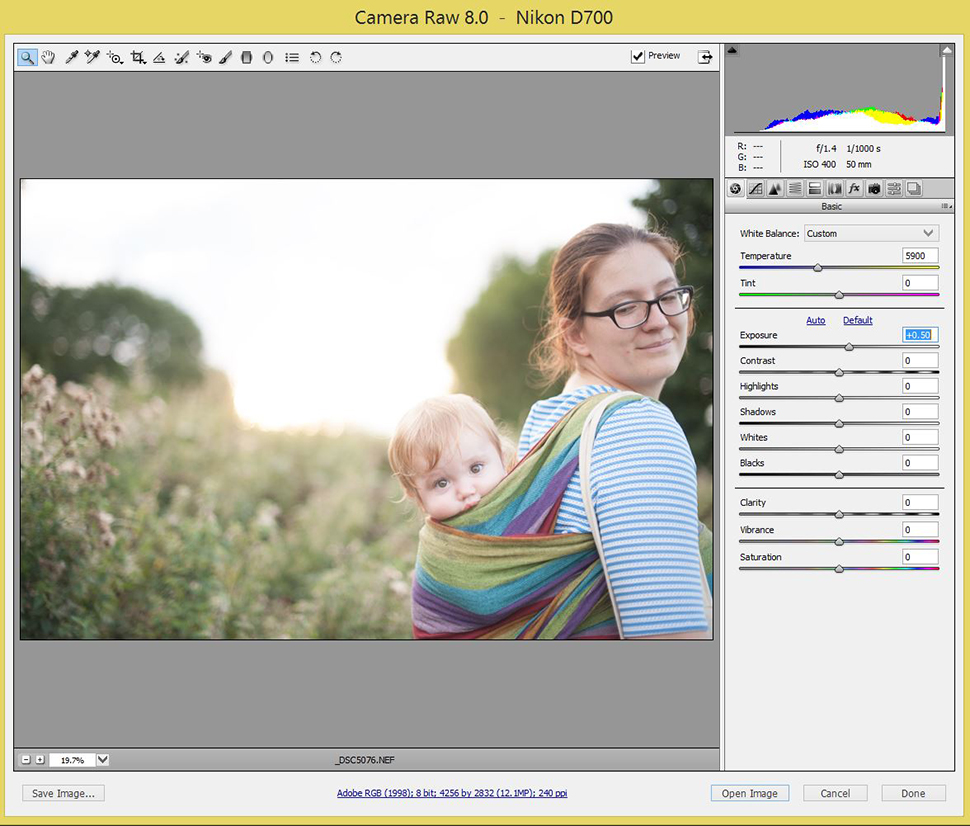 Here I have increased the exposure to +0.50 and the image looks much brighter.  Do you see the improvement?  You might be thinking that it’s a bit dull without any shadows, in which case step four will please you. 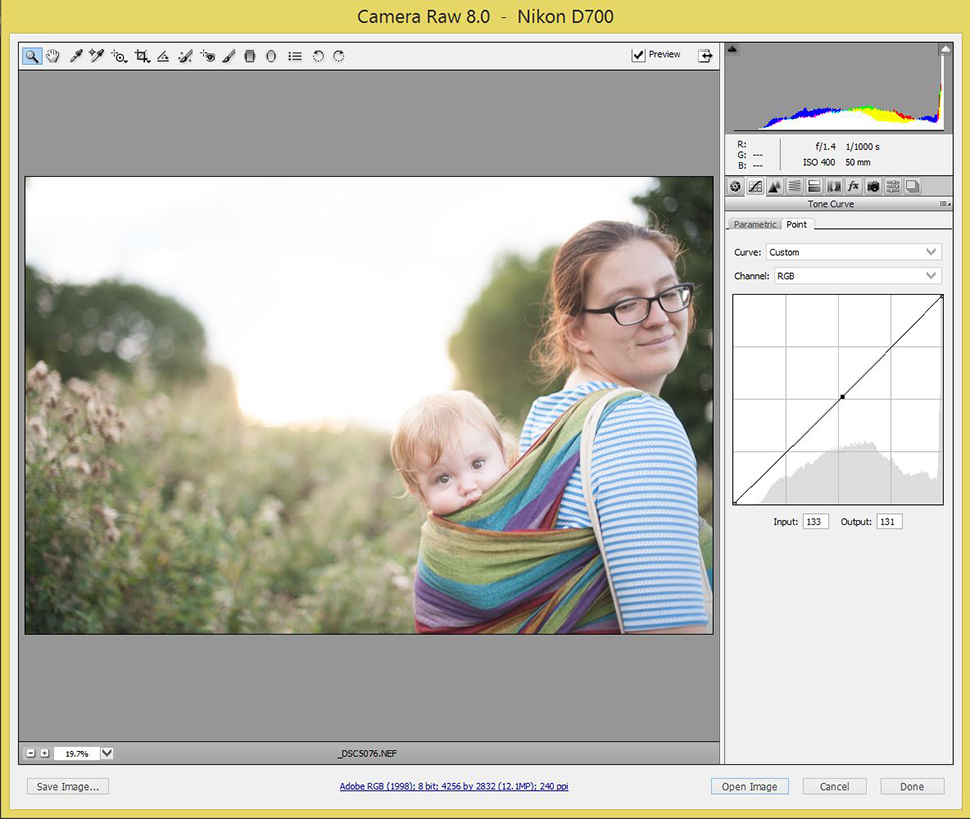 When you are satisfied with the temperature and exposure of your image, it is time to add a curve to emphasise the light and shadows in the image.  See the icon with the little curve, on the right hand side of the screen?  Click on that and it will take you into the Curves tab.

You’re going to left-click on the line with your mouse and pull the line to make a curve that looks like a sideways ‘S’.  Be careful that you don’t blow the highlights or lose detail from the dark points in the image. 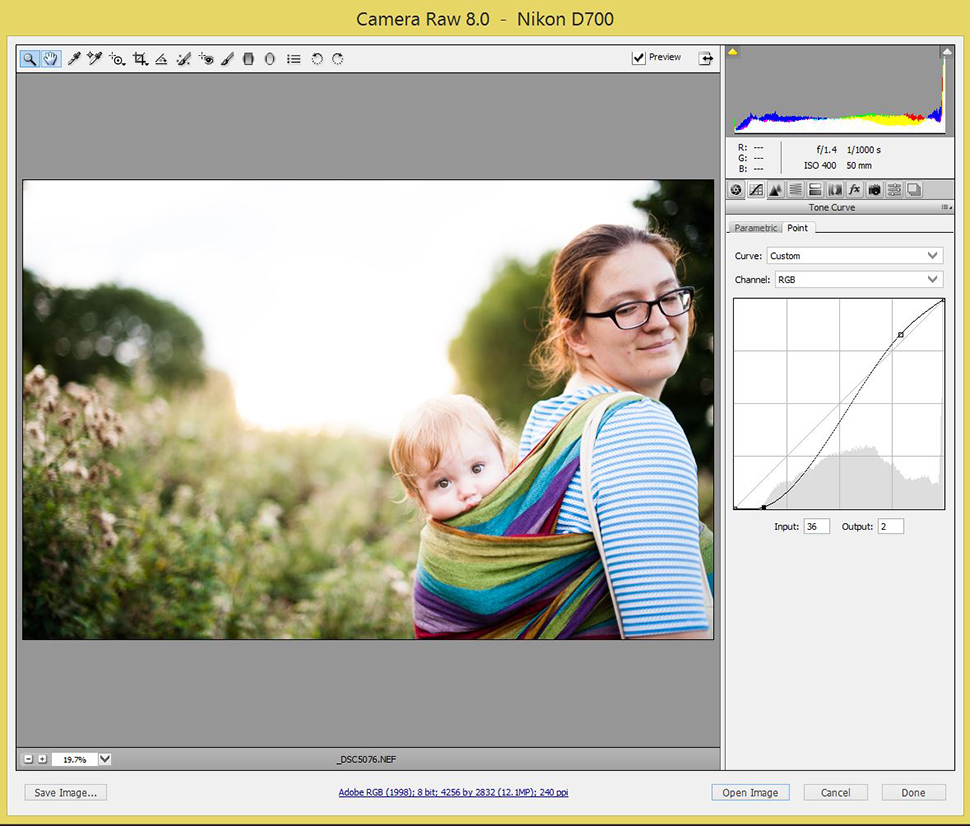 This step really brings the image to life.  Experiment with your curve until you’re happy with the level of contrast in the image and then breathe a deep sigh of relief because your first foray into the world of RAW is over and you’ve survived.

Click ‘open’ to export your image into Photoshop.  Don’t forget to sharpen the image before you save.