Whilst the boys were enjoying their very first sleepover with my mum, sister and future brother-in-law, Kirsty and I spent some quality time with our little daughters. They are so different when their brothers are not around; it is as though they expand to fill the space that is left behind. My confident, chatty Polly is positively bolshy, and quiet Embla becomes a different baby altogether when our attention is focused solely on them.

My sister and brother-in-law collected the boys at noon, so we had a luxuriously long afternoon to spend with the smallest two humans in the family.  And we had such a lovely time that I thought that I should record it, as well as document what the girls are like at fourteen months old.

After they awoke from their nap, we let them splash in the bath for as long as they liked.  They rarely get to enjoy a bath without having to share with their bigger brothers, and they were over the moon to be able to cavort in the water like little acrobats with two mummies to play with and no Balthazar and Lysander stealing most of the space and cramping their style!  After they dried off, we let them rampage about our bed for a little while whilst I snapped the photos for our recent Pampers collaboration (my favourite new photos of the girls!), following which we dressed them in their coordinating bunny onesies, popped them in to their carriers and hopped – pun intended – on the bus with Josephine-dog. 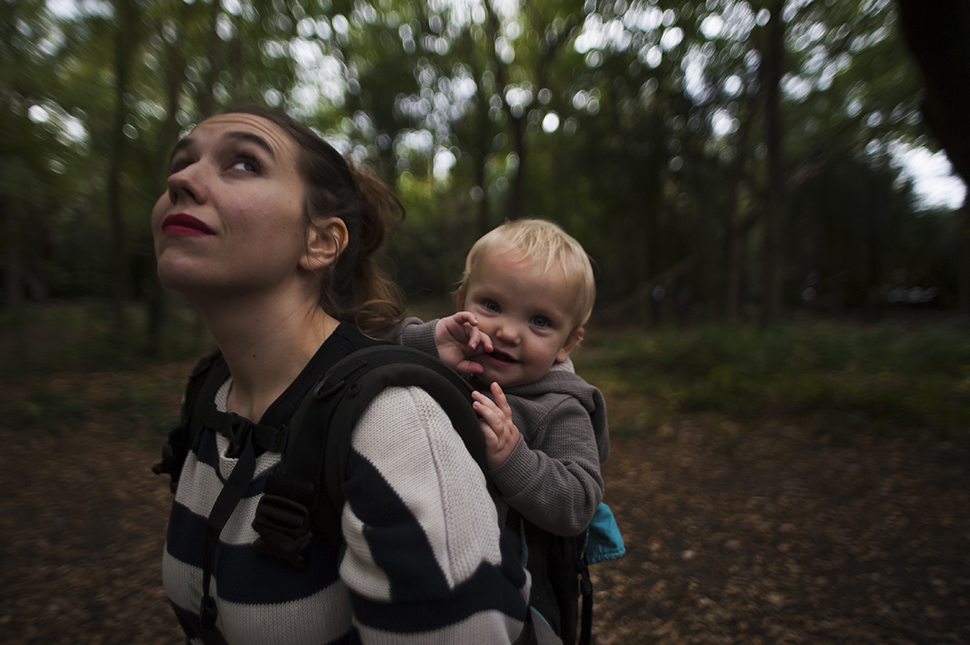 Olympia, looking frightfully grown-up on my back.  She started out the trip on my front, upon which I found myself craning like a meerkat in order to see above her fluffy duckling hair.  After I tripped into the dog for the second time I was forced to capitulate and admit that my baby was officially too tall to snuggle comfortably against my chest.   I wanted to pout about it, but Polly was so delighted to be up high with hair to grab that I couldn’t feel sad for too long. 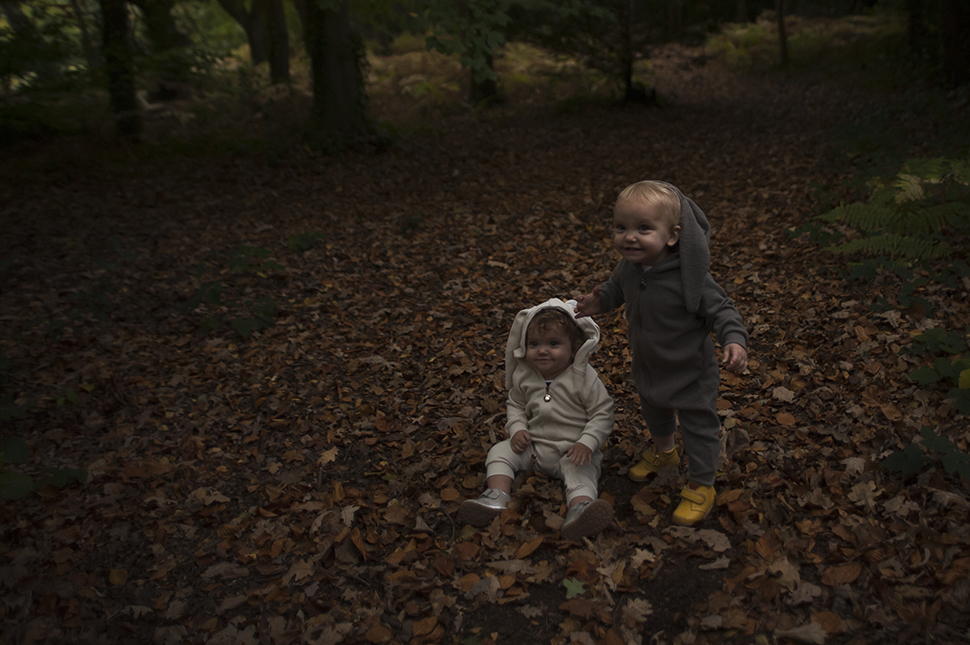 Look at those naughty bunnies..! 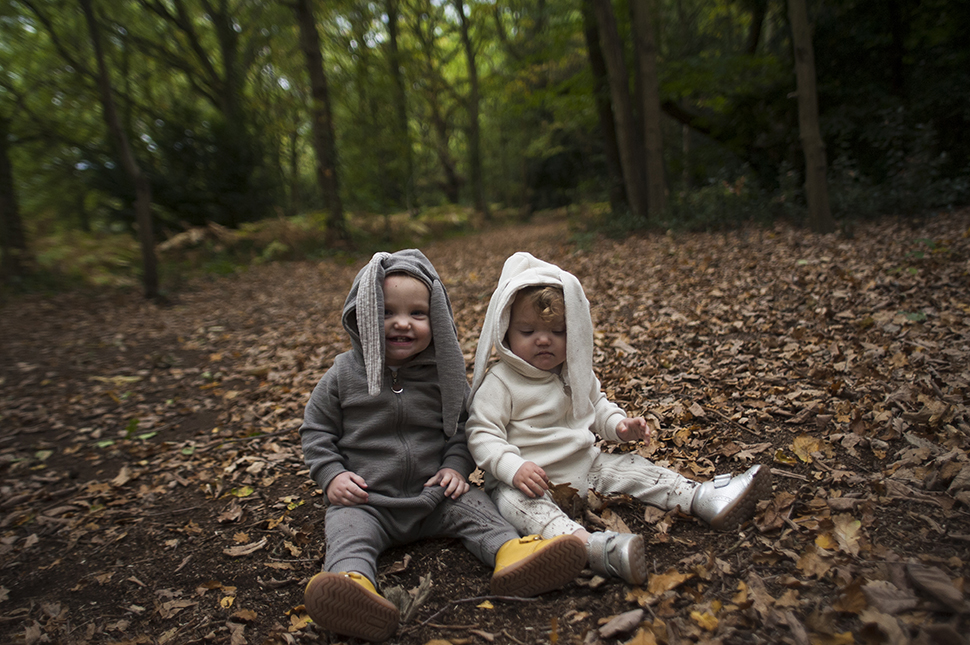 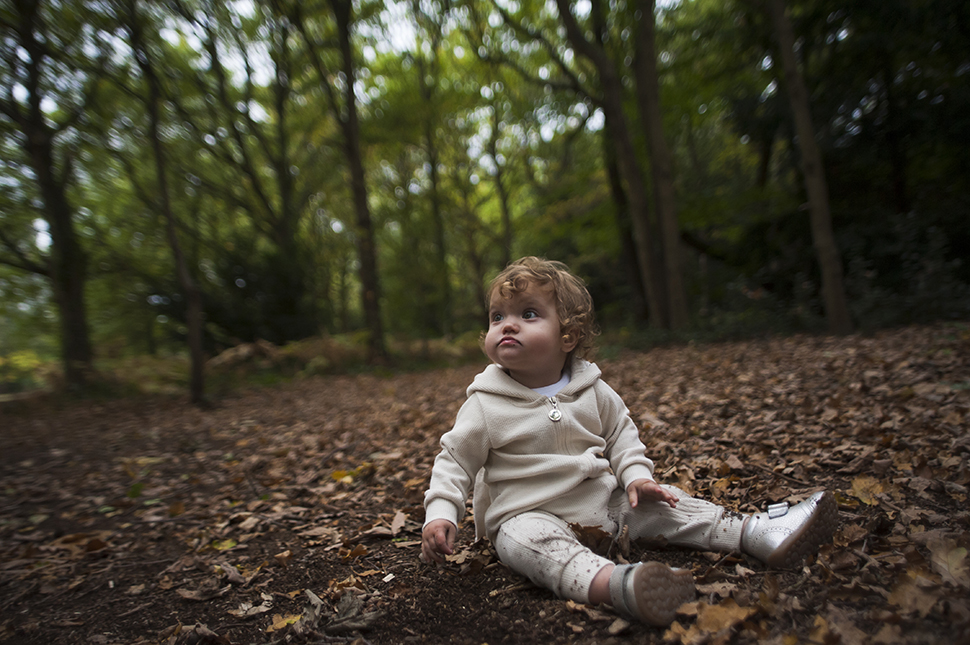 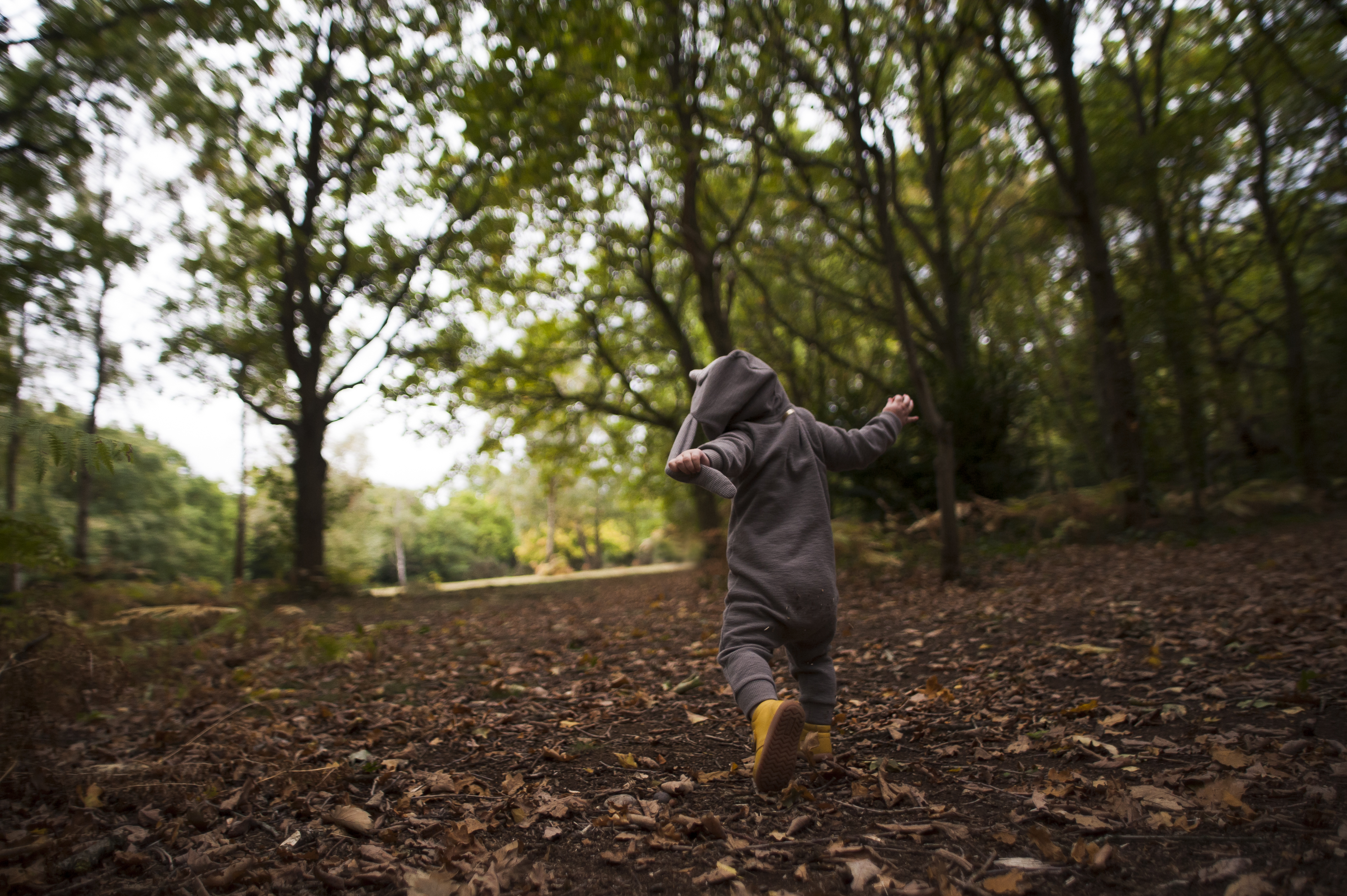 Olympia hates hoods, and she especially hates hoods with stupid dangly ears.  I have a hilarious collection of photographs just like this one, of the naughty baby ripping her hood off as she disappears into the distance.

It will make for a great conversation with her therapist when she is older. 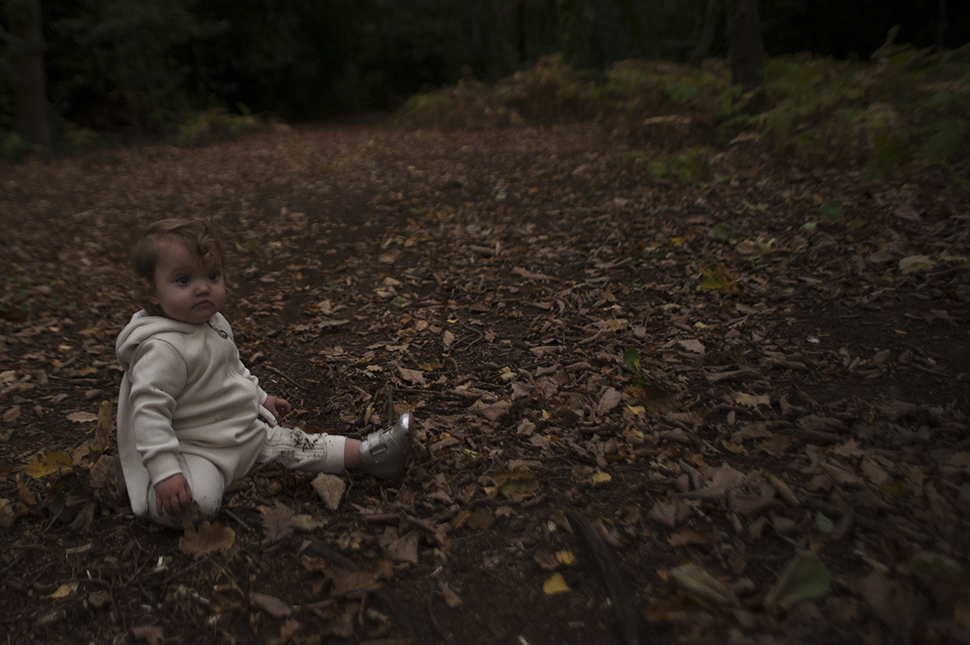 Embla isn’t best fond of hoods either but she can’t run away yet, so… 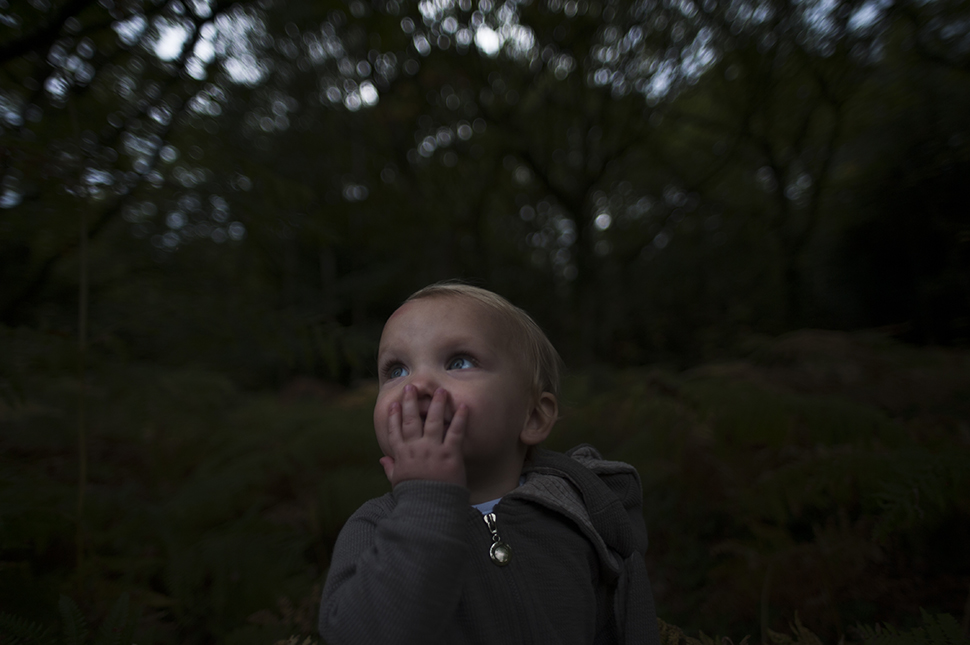 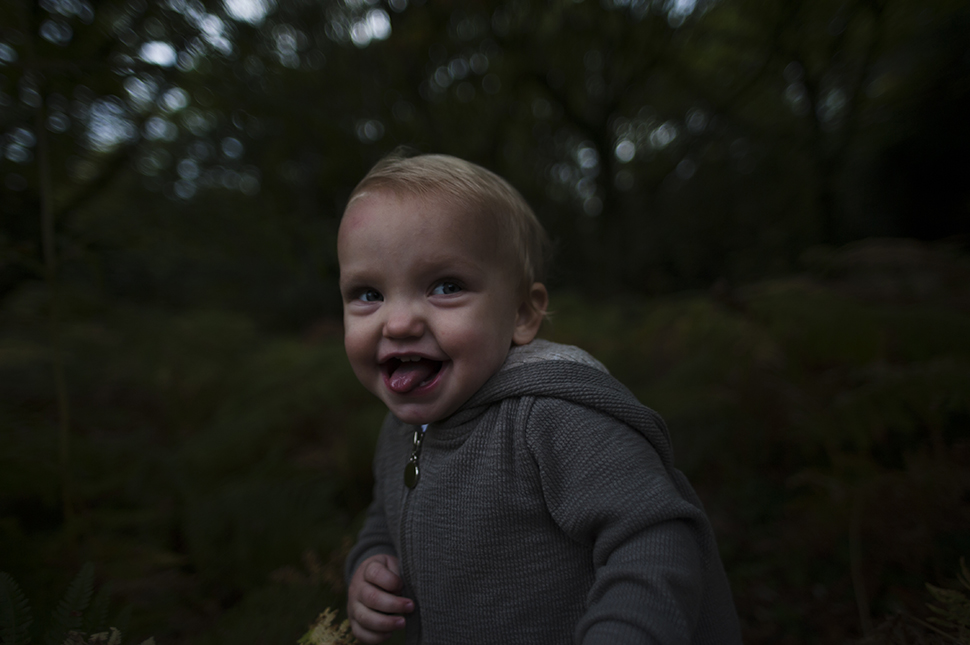 Look at this bad baby.  Just look at the wickedness on its naughty face.  I cannot even. 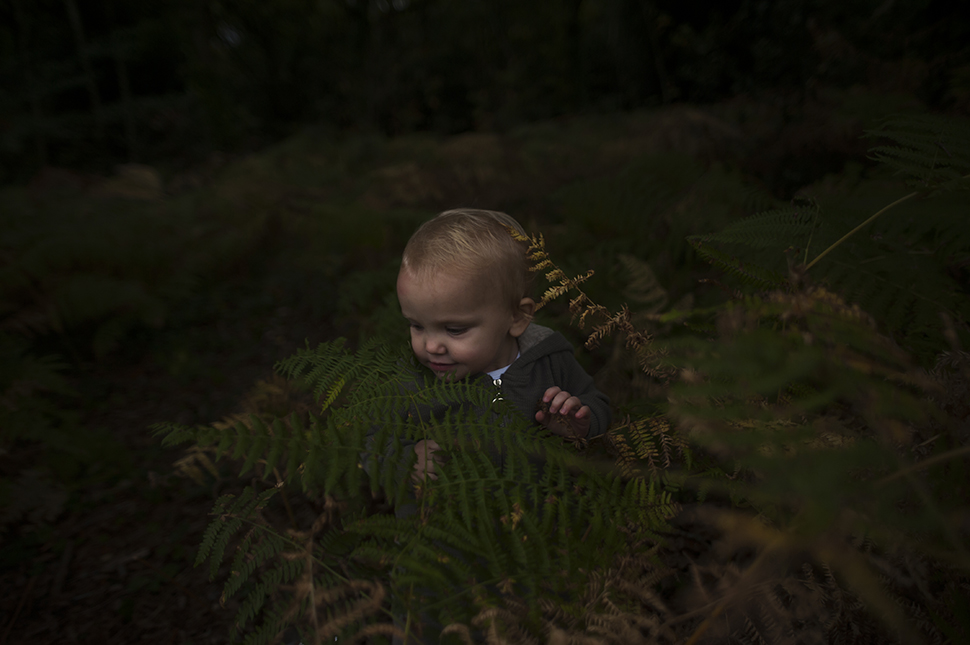 I had to trap it behind some ferns in order to photograph it.  She is sooo naughty. 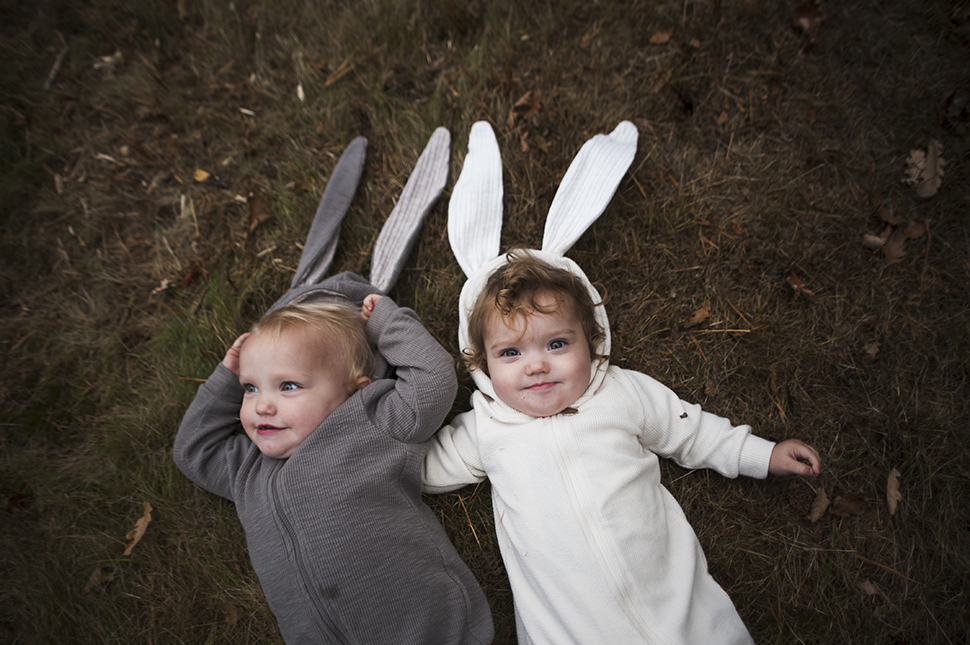 Behold, Embla laying down peaceably for a sweet photograph of twin babies in bunny ears – and her horrid sister, pulling the hood down as she rolls away… 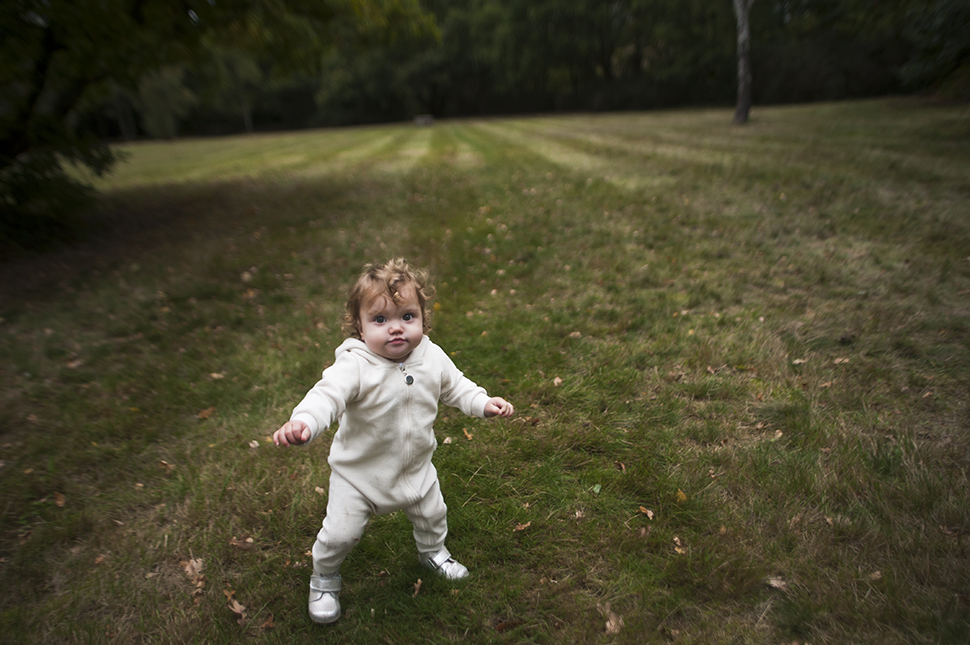 This is baby Embla’s first walking photo!  It was quite funny – I had been chasing Olympia all around the field for about forty-five minutes, and in a fit of exasperation I turned to Kirsty and said something like, I’m not getting any photos of Emmy because she is so far behind.  Baby needs to make an effort to catch up!  A second later I heard this triumphant little shriek and I turned back round and she was walking.  Look at the steely determination on that face. 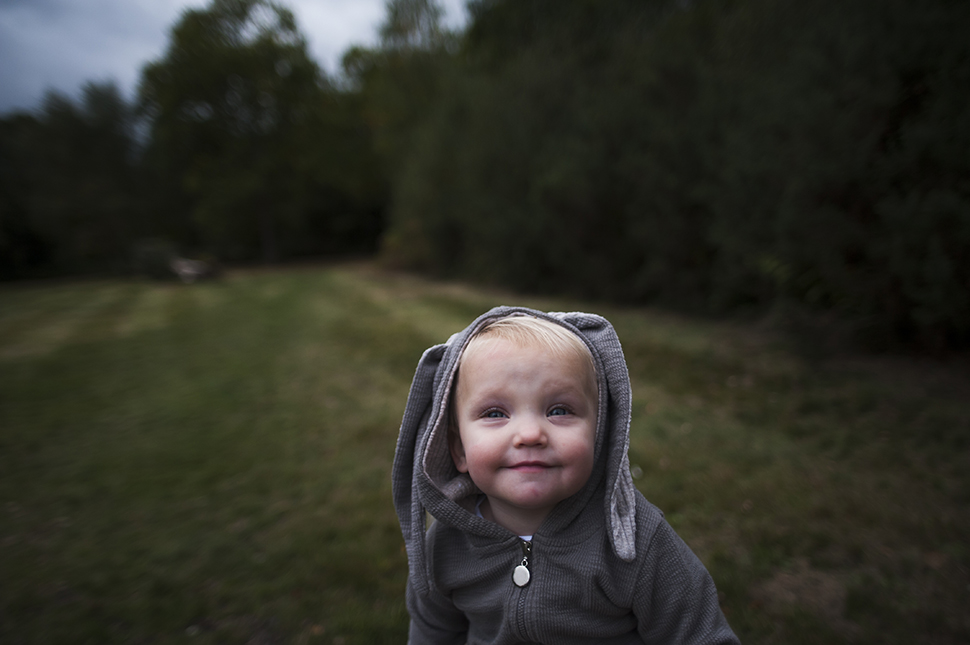 This may look like the face of a compliant cherub but actually I had trapped her on a high bench for this photo – see below.  Would somebody please send an owl to the Malfoys and let them know that I have their child, and they’re welcome to take her back any time they want?

(Kidding.  I would die for this child.) 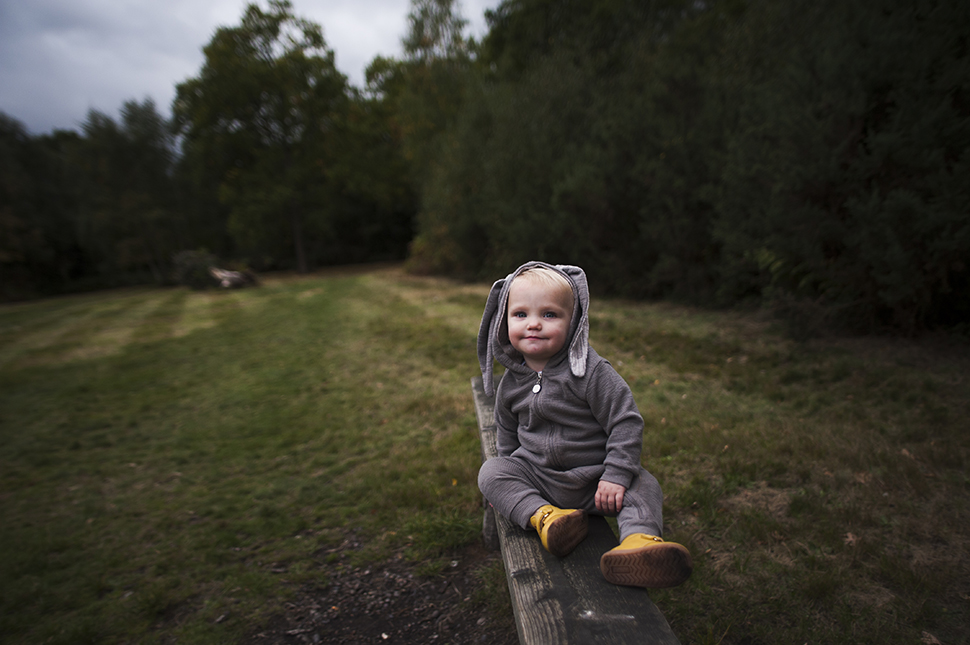 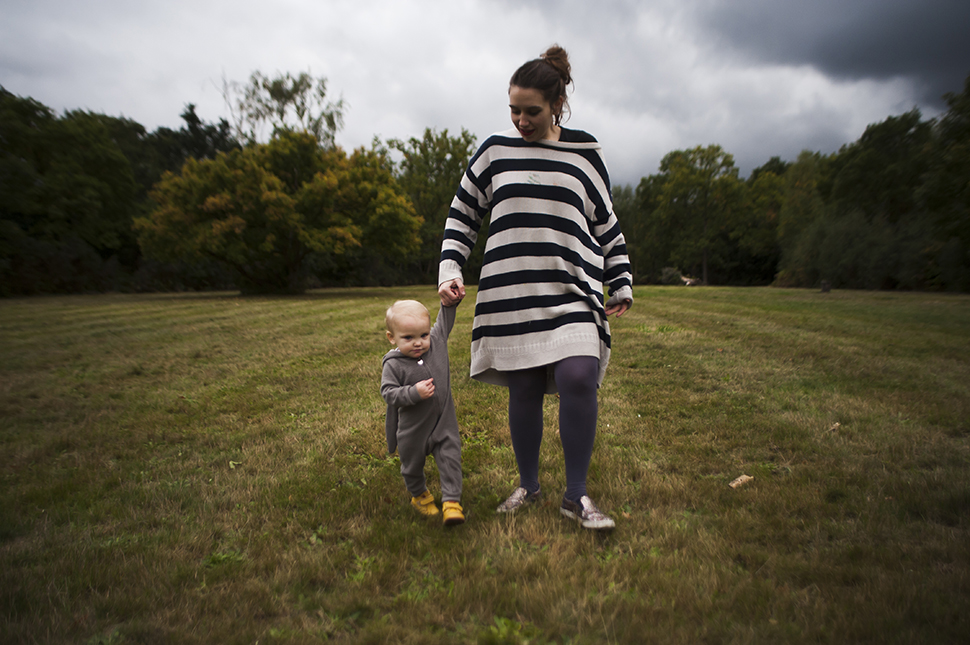 Me, reclaiming it after it legged it halfway across the field in the five seconds it took me to pick up its sister. 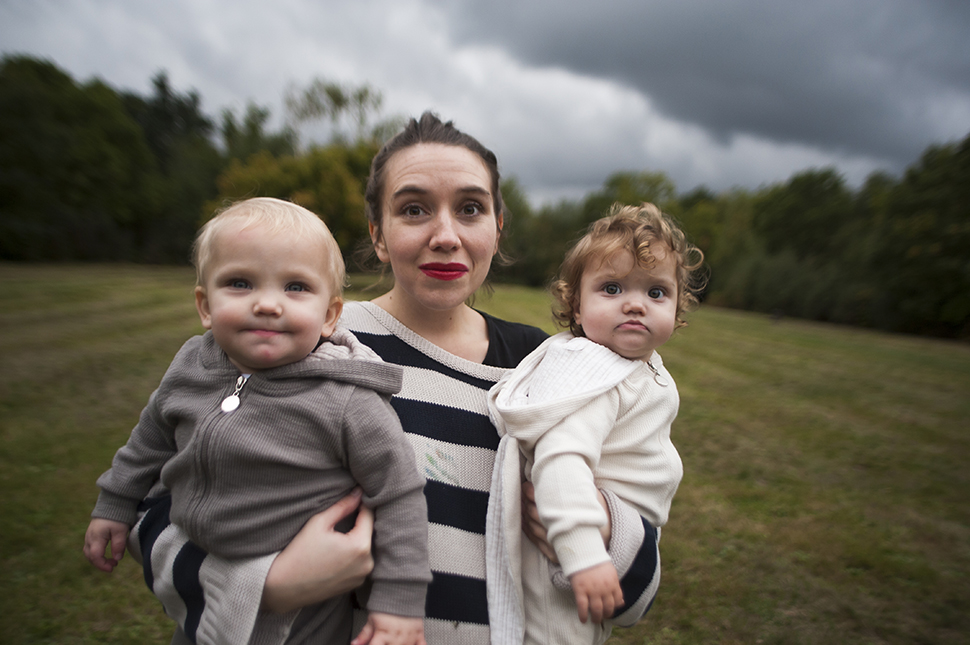 This picture makes me smile because somehow they look nothing alike and yet they both look like me. 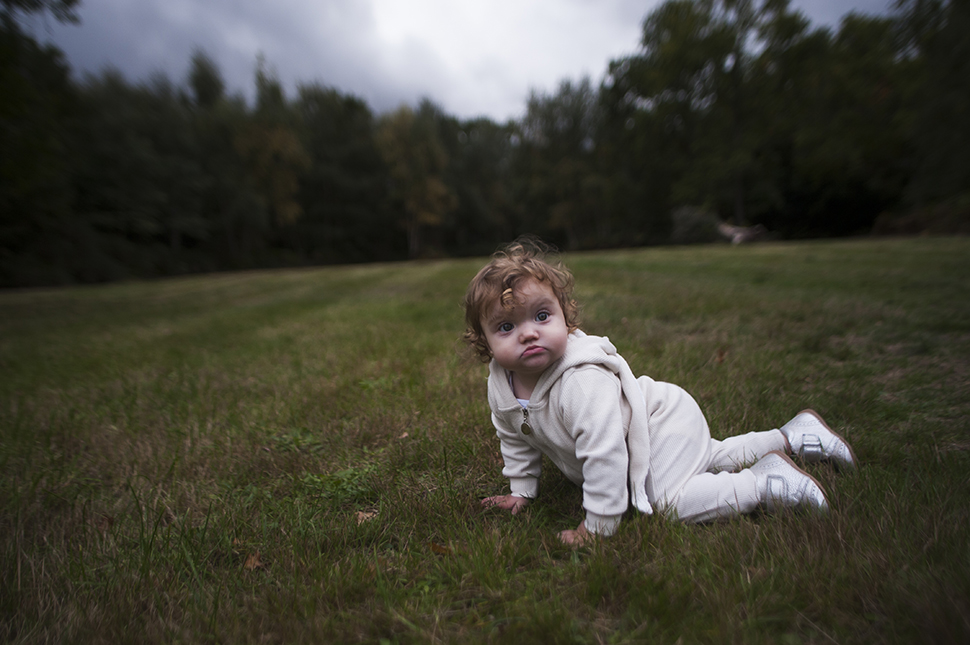 This is the look that Emmy gives her mama when she walks away.  Child would live on Kirsty’s hip if she could (and I love it!  So cute.) 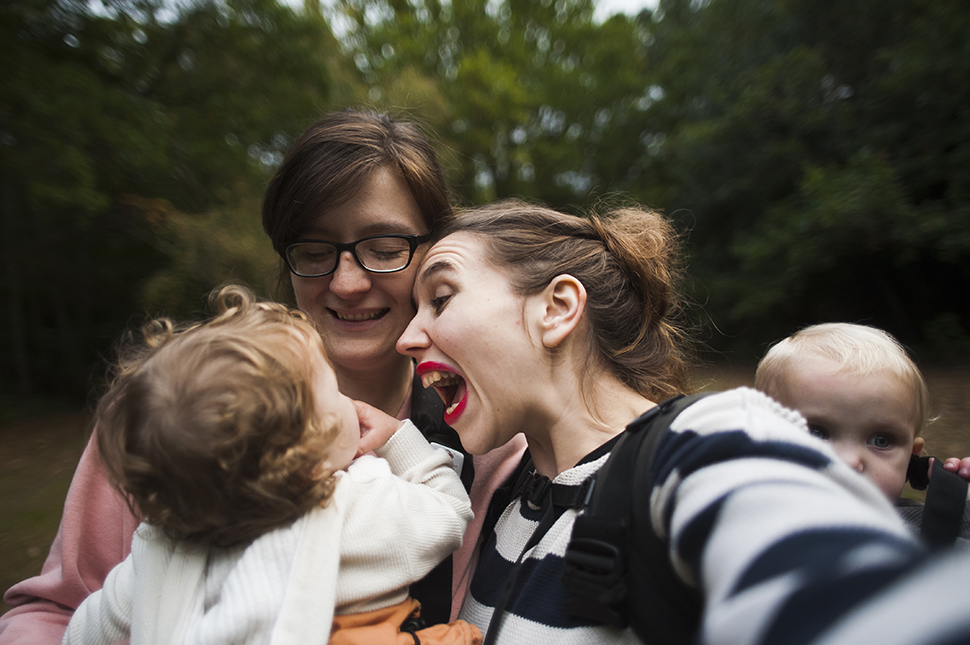 We couldn’t let the walk pass without a selfie.  Do you see Olympia trying to escape the carrier on my back, there?

So I thought I’d talk a bit about what the girls are up to at the moment, because they are so funny and so fun at the moment, and I find it really interesting how one of these little bugs is very much a toddler and the other is just on the cusp of still being a baby.

Embla has one word: Dat.  It means Mother, what is this, and it comes with a pointed finger that indicates precisely which dat she is questioning.  Kirsty says that she says ‘ma’ for more, but I haven’t heard it yet.  She likes to climb, and she’s a little monkey in water – splishing and splashing with reckless abandon.  Her favourite thing to do is to make noise whilst flipping her own lip, for the sound.  She’s a funny little clown and an utter mama’s girl and we are just loving having a baby in the house for a bit longer.

And then there is Olympia.  Polly Poobum Mcbitey has been walking since she turned nine months old.  Her vocabulary thus far consists of: Mummy, Zaza, jumper, dog, good girl, close the door, toast, bottle, goodbye, goodnight, cuddle, kiss, tickle, yes, no, stop it, hi Josie, Emmy, banana, pear, walk, park, dolly, baby, kitty, shoes, no more, more, that, book, go away, look, blocks, apple, dinner – and those are just the ones that I can think of off the top of my head.  She sings.  She sings Row, row, row your boat and See-saw Marjorie door, and she keeps the tune.  She builds.  She likes to stack the boxes of nappies to build a tower her own height.  She thinks that she’s a triplet to the boys and a mama to her dolls, whom she carries about right up until bedtime – at which point they get tossed out of the cot.

Funny how twins can be so different from each other.

I love them both so much.

Pampers Made with Love #AD

Last DITL with Four Under Three

Fantastic blog. I agree with you about the photo that shows both the girls looking like you, but in such different ways!
How wonderful ????
The girls are such a joy, just like their brothers.
You have such wonderful, characterful children.

I adore how different their personalities are! Simply amazing xx

Oh my goodness, they are just adorable, you make me want daughters of my own – STOP IT! Beau has the same onesie as Olympia, isn’t it just the cutest thing? Your little baby bunnies have grown up so much and how beautiful they both are. I think it’s great that they’re so different, so many personalities to love, embrace and cherish in your household x