Ever since she was born I have intended to write about the process of choosing Baby Vita’s name. When we announced it initially it inspired a Reddit thread where its members wondered whether we were enormous Harry Potter fans or members of the occult! The answer of course is neither (though I concede that Ms Rowling and I could easily name a few dozen kittens together and I will always be a little sad that she got to the name Bellatrix before I did), but it did make me laugh. I thought I would share with you how we chose Vita’s name and why, and what we would have called a little boy.

Kirsty and I have, of course, named four other babies together already and our tastes are quite different. We both like names that have been names for a long time, but if I had to describe our tastes in names I would say that her preference veers toward names that are more mainstream (Helena, Thomas) and mine tends to be somewhat quirkier, with a literary or mythological twist. We live somewhere with a reasonably-sized population of unusually named children (our Balthazar is not the only Balthazar in our town, for example), and so our children don’t seem to stand out with their names as much as they might in a town full of Teddys and Avas although there are plenty of those around too! 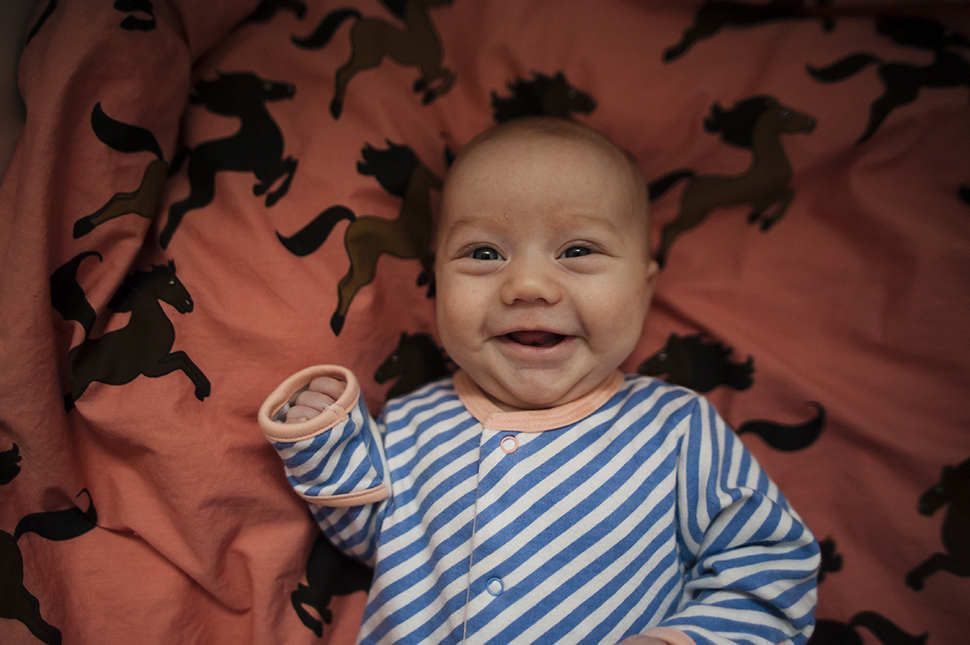 We decided not to find out the sex of our baby ahead of the birth this time around. Previously, we had found out the sex of each set of twins by seventeen weeks and so had plenty of time to narrow down ‘the’ names by the time that they were born. Nonetheless, whilst our sons were named in advance of their coming into the world, it still took us a few days to name our daughters. In case you don’t know, and we don’t expect anyone aside from us ever to remember all of their full names, they are Balthazar Octavian Percival, Lysander Edmund Odysseus, Embla Felicity Minerva and Olympia Leto Beatrix. They all have a lot of name and I can never quite shake the feeling that we went a little overboard when naming the boys, but when we started having children I didn’t expect to have so many of them and wanted to use as many of my favourite names as possible! The boys had names by the the middle of the third trimester and the girls were officially named about three days after they were born; right up until I was about thirty-seven weeks pregnant with them we had completely different names and then we suddenly went off of them and had to come up with new ones!  If you are curious, you can read my post about choosing the girls’ names.

So we knew that naming our fifth baby would either be incredibly simple, as we only had a few beloved names left, or super difficult if we wanted to find names that were previously unfamiliar to us. And it was complicated by the fact that we had elected not to find out the sex, and so we needed names for a boy and names for a girl. Kirsty was not especially eager to decide on a name before the third trimester (I think our previous experience of tiring of the girls’ could-have-been names just before birth put her off!) and so she charged me with the initial task of sourcing potential names and compiling a list for discussion, which I was only too pleased to do. For the first few months I was keen to find the Perfect New Name and I dedicated hours to trawling through old mythologies, re-reading favourite books (or Wikipedia-ing character lists of favourite books) and looking at the names of the children of every new instagrammer I followed. But ultimately, although we did have a few new names to consider, our front runners were always names that we had already considered with but sets of twins.

We had a few limitations: we wanted names that were easy to pronounce and fairly intuitive to spell, and they had to have their own letter of the alphabet (so no A, K, B, L, E or O names). That in itself ruled out a couple of our favourites as first names, such as my top choice for a boy, Edwin. We briefly considered Ptolemy for a while too, but axed it when we realised that the most intuitive nickname, Toly, would rhyme with Polly. This was an issue too with Jolyon ‘Jolly’, which Kirsty was quite unhappy about as it was her favourite choice for a boy. We considered Stellan too, which is one of Kirsty’s favourite names of all time, but she removed it from the list as she didn’t feel that it ‘went’ with our other children’s names and there was a dearth of good nicknames.

Girl names were narrowed down quite swiftly to Thisbe or Vita, with Kirsty favouring the former and I the latter. We liked that we could take the same nickname, ‘Bee’, from either and so when we imagined having another daughter, it was always Baby Bee. On our longer list was Aurelia, Magnolia, and I wanted Winifred but Kirsty didn’t like it at all.

Right up until I went into labour I felt that the baby was probably a girl, our Bee, and then between contractions, when I pictured pushing the baby into the world and looking to see what sex it was, it was very clearly a boy. By that time, we had compromised on the name Jolyon Benedict Winter for a little boy, with ‘Joy’ and ‘Lyo’ for nicknames. The first name was Kirsty’s choice and the two middles were mine – Benedict because we both liked it, and Winter for the name that we had given the embryo, our little snowflake, Baby Winter. I felt quite sure that we would be welcoming a little boy and was so excited to meet our little Jolyon. It is a name that we considered for the boys and would likely have used for the girls, had they been of the male persuasion. Jolyon is the medieval form of Julian, which was Kirsty’s favourite name for a long time.

By the time that Vita was born, we were fairly certain that a female child was a Vita rather than a Thisbe. Although we like both names very much, and Thisbe was actually Embla’s in-utero name until we changed our minds, we opted for Vita over Thisbe as it is so much more intuitive to spell and to pronounce. Nonetheless, it wasn’t set in stone and I think that had she been born looking considerably different to how we had expected, for example had she been blonde like Olympia, we would have headed back to the drawing board for a new name entirely. As it was, she was so perfectly our baby Vita that it barely required any discussion at all. Her name was formally agreed by text message after Kirsty went home to rescue Grandma from her older siblings!

Vita is an ancient Roman word/name meaning ‘life’. We really liked that it was so unusual in spite of being simple to pronounce and spell, and tied in so nicely with the trend of two-syllable names ending in ‘a’ (Alba, Thea, Ava etc). And I thought it was was pretty cool to have a name that started with the letter ‘v’ as not many do. Kirsty chose her middle names, as Vita was really my choice, and she selected Marina Calliope. Marina means ‘of the sea’ and suited our girl, who loved her bath times even in utero and would stretch out and kick like a little frog when I submerged myself in the water. Calliope is the Latinised form of the Greek Kalliope and means ‘voice’. It was the name of one of the nine Muses in Greek mythology; she was a goddess of epic poetry.

Mostly, we call her Vita or Vee, though the children struggle with that sound and call her ‘Beeta’ – so we did get our Baby Bee after all, and yet we use that nickname less than we thought that we would! I love to say her full name, Vita Marina Calliope Wilde, out loud. I think it is beautiful – and I hope that she will agree when she is old enough to have an opinion.

A Girls’ Date with Catimini [AD]

Oh What a December!

Choosing a name is (almost) as important as giving birth.
I think!
I love “complicated and historical” names…
Needless to say; I love all of your kids names.
My four have unusual names… they are uniques! And now being teens … they are proud of that!

I love little Vita’s name, as I do all of your children’s.

Obviously you’re free to ignore this, but when you say you feel the boy’s names are a little overboard, is that for the full names or their first names? Just asking if it’s too much because if my little baby turns out to be a boy, Lysander is my ultimate favourite.

Hi Louisa! Thank you so much for commenting. I actually think Lysander is really accessible as a name – after all, it is so close to Alexander and nobody ever says that is too much! And there are so many superb nicknames. I think in retrospect I’d probably pair it with something a bit less ostentatious; Lysander Thomas would have been really lovely, or something similar.

Congratulations on your pregnancy! x

I had a super cool friend at uni called Vida so I love Vita! I love unusual names but Hubble didn’t. My children are 18 and 16 now but I really wanted to call my daughter Tatiana Skye but she’s Saskia Elisabeth! I wanted my son to be Dashiel Blue but he’s Darcy Charles! He was almost Maximus until we thought he may grow to be tiny (he’s 6foot 4!) Your children have beautiful names. X