[We were offered tickets to attend Diggerland in exchange for a review, but we were not financially compensated for providing this publicity.]

As with most four-year-old children, my sons adore anything with an engine.  In fact, probably one of my most devastating moments in parenthood was their fourth birthday when they were finally, finally old enough to come horse riding, and after the lesson Balthazar slid off of his pony (approximately 10hh of sheer adorableness) and, pointing at the tractor, remarked rather wistfully that he wished that they had been allowed to ride that instead.

So when we were invited to Diggerland last month, I knew that they would be in their element.  We were offered four tickets and I considered paying for an additional ticket in order to bring my daughters (also big fans of anything construction-related) along as well, but a quick browse of the Diggerland website suggested that at their size, they would really need an adult each in order to get the most out of Diggerland and as there is only one of me, we decided it was best for them to enjoy a day at home visiting Grandma with their mama whilst the boys and I headed out for this particular adventure.

Diggerland has four venues – Kent, Devon, Durham and Yorkshire – and we visited the Kent one, which is near Rochester.  It’s a bit of a pain to get to by public transport on a Sunday, but can be done with a bit of a walk to the bus stop and then, depending on where you are located, the train from Rochester Station.  We are enormous fans of a train journey and it was lovely to sit with them and chat, and do some drawing with scrap paper and a biro that I had luckily found in the bottom of my bag. 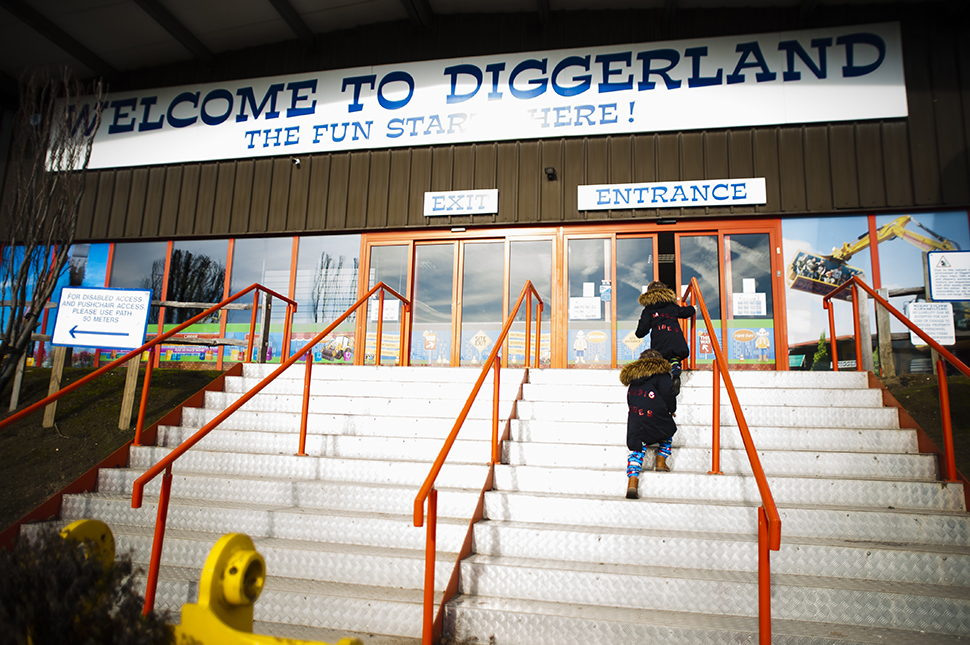 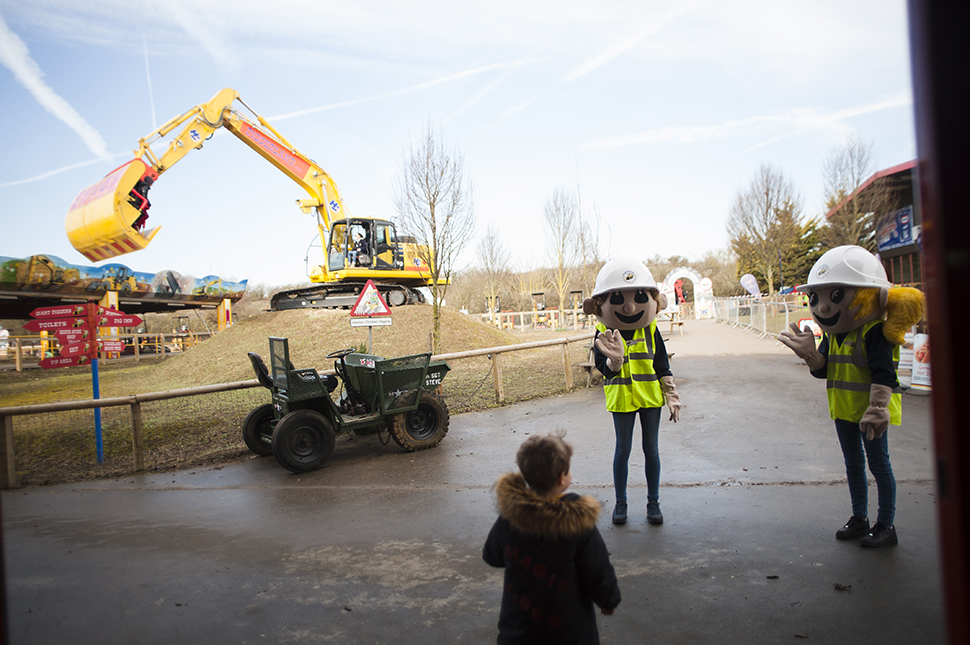 At the beginning of this review, I’d like to take a moment to note how absolutely lovely all of the staff were at Diggerland Kent.  As a small theme park, it’s never going to compare to, say, Thorpe Park on quality and quantity of rides, but what you do get is a very personalised experience with kind professionals who go out of their way to make the day special for the children.  Everyone had a kind word for my boys, and took the time to chat to them about the rides.  The staff were always smiling. 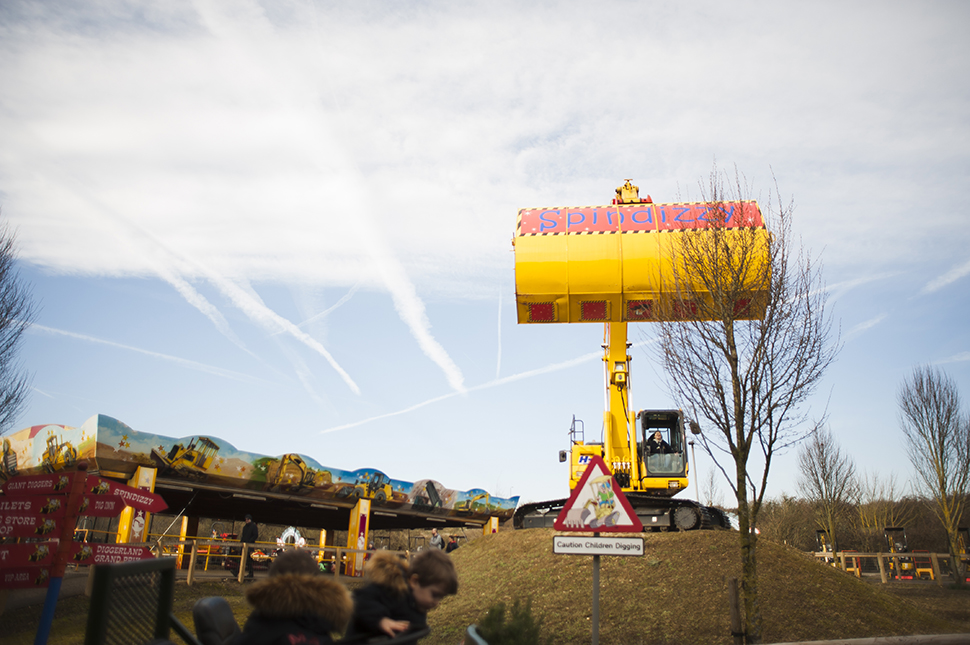 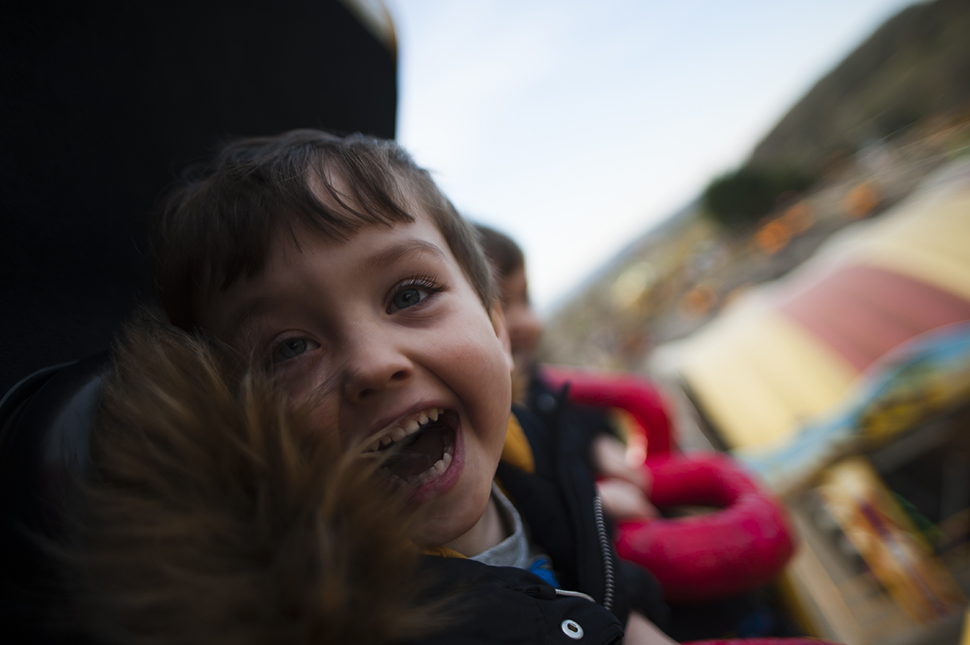 The two photographs above are from the Spindizzy, an experience that I can honestly say was worse than childbirth.  The nature of this ride is probably self-explanatory and my boys went absolutely wild for it.  In fact, they went on it twice.  The second time round, I asked if they wanted me to come with them again and they looked at me pityingly and responded that it was ok, I could just hold their bags and take pictures.  They are only four but they’re absolutely fearless with a scary thrill-seeking streak!  As for me, I was very glad for the reprieve.

I shan’t describe all of the rides but you can see lots of images from the day below. 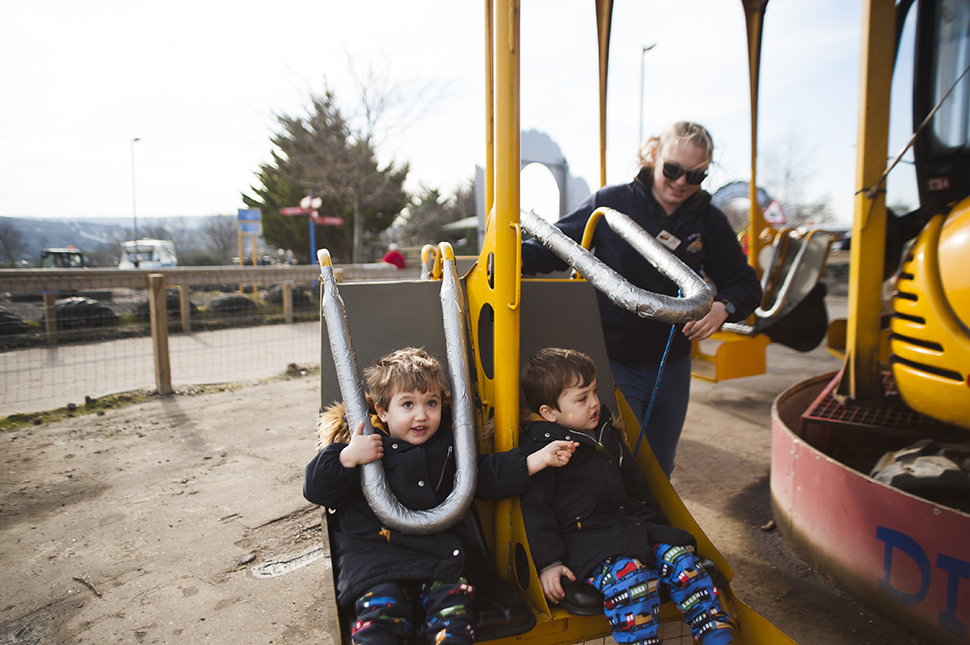 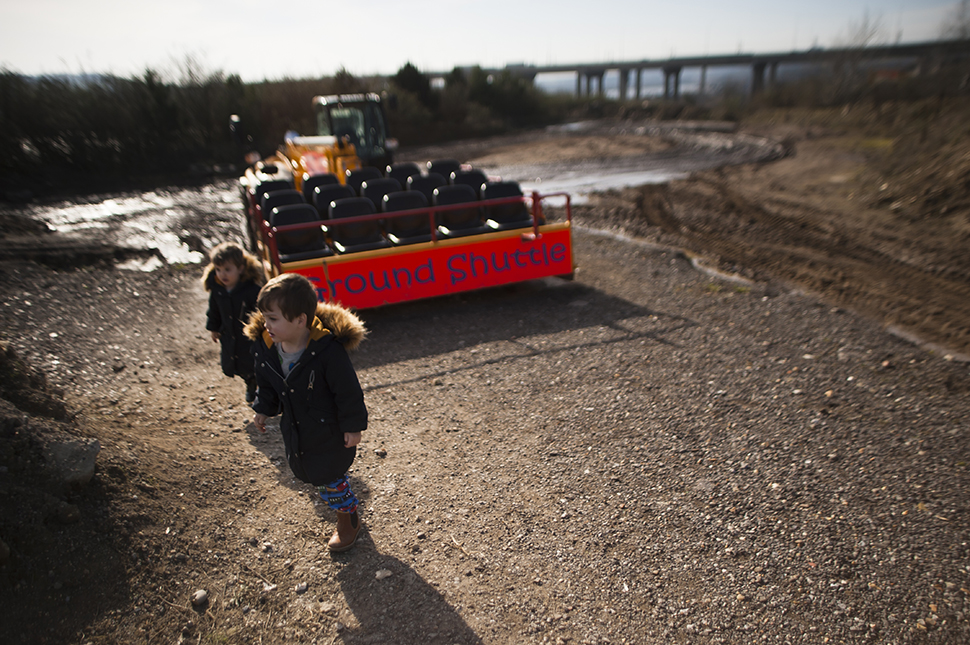 The Ground Shuttle above was our favourite because it’s super bumpy.  They laughed every time we went over a dip. 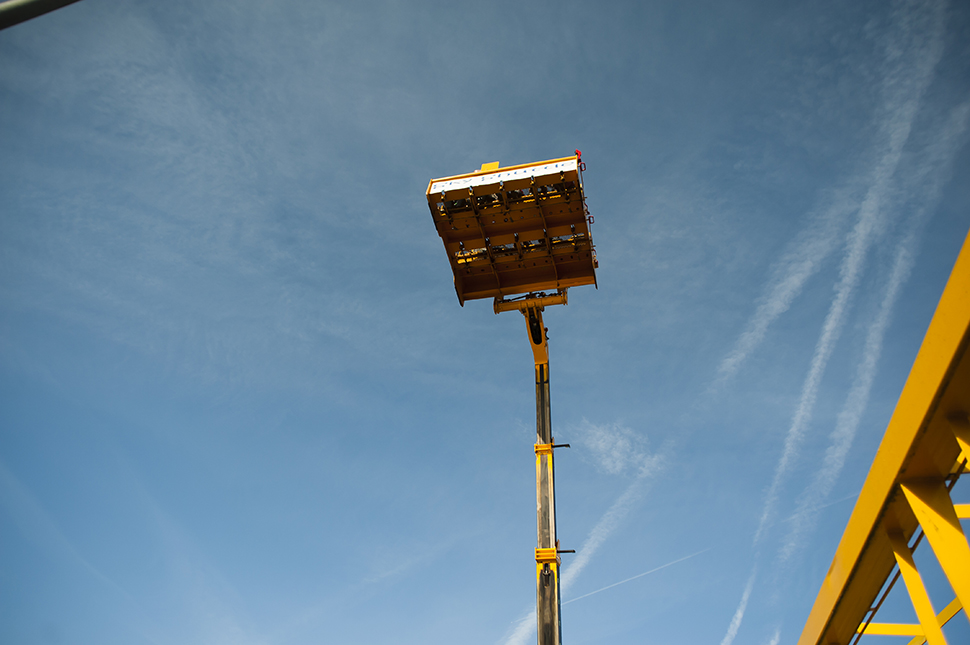 My tiny babies went on the Skyshuttle, above, all by themselves as well.  There wasn’t room for me to join unless we waited until the next turn, so they decided to leave me behind.  My heart was in my mouth in case they accidentally fell out, but I guess at four they can be trusted to act sensibly on rides now.  It was one of those bittersweet moments for me where I suddenly realised that they had grown but my schema of them hadn’t quite caught up.  They came off buzzing and thoroughly pleased with themselves; they love to be offered independence. 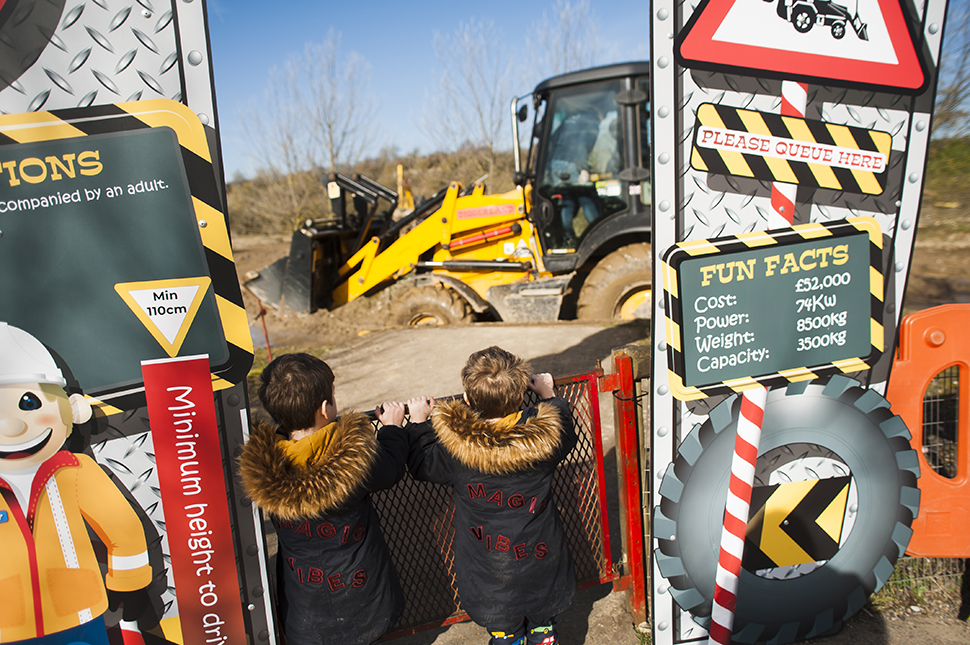 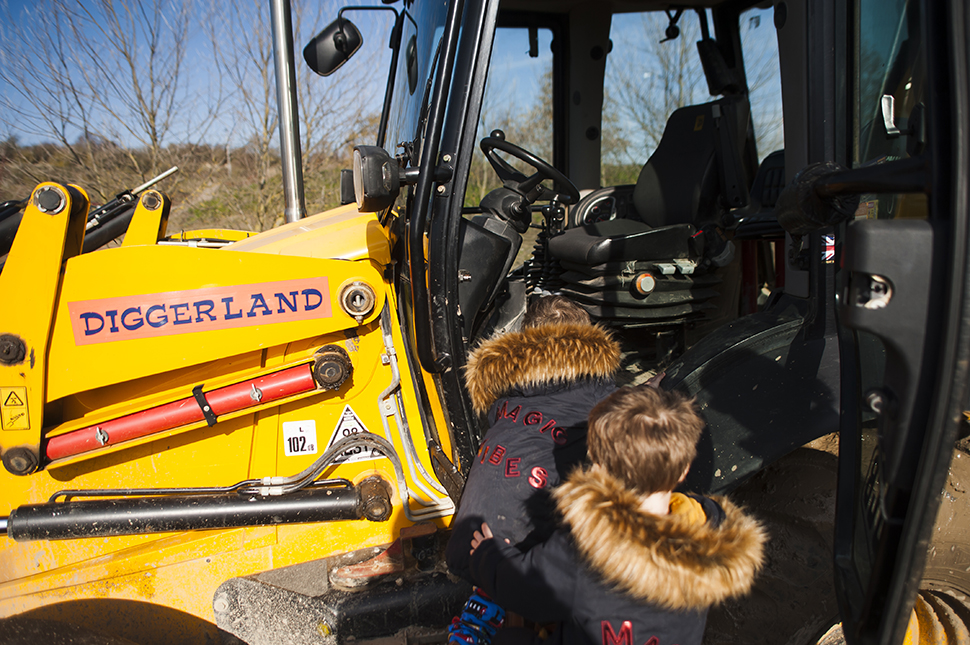 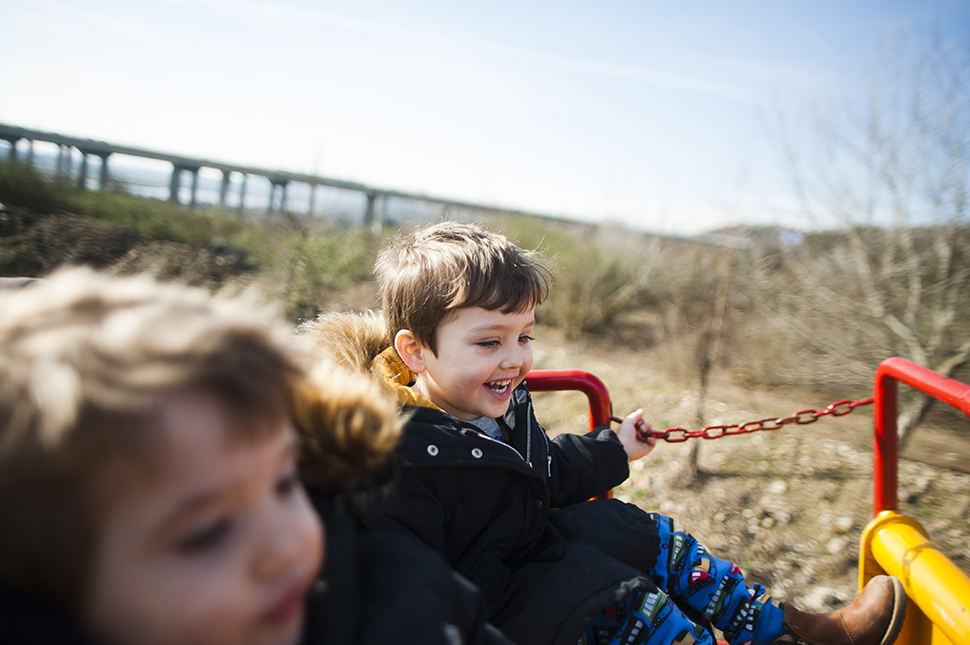 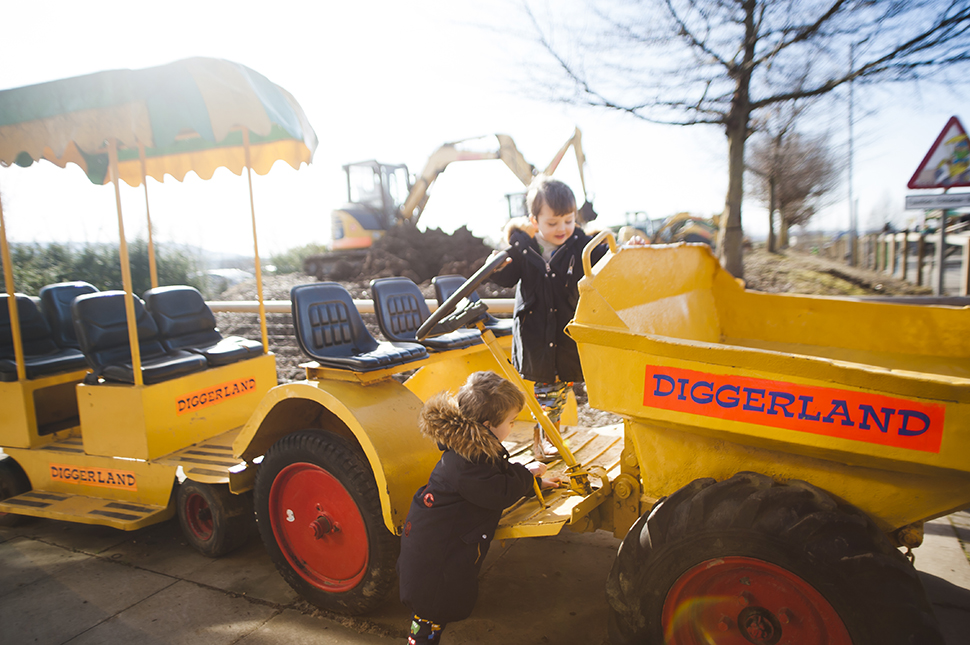 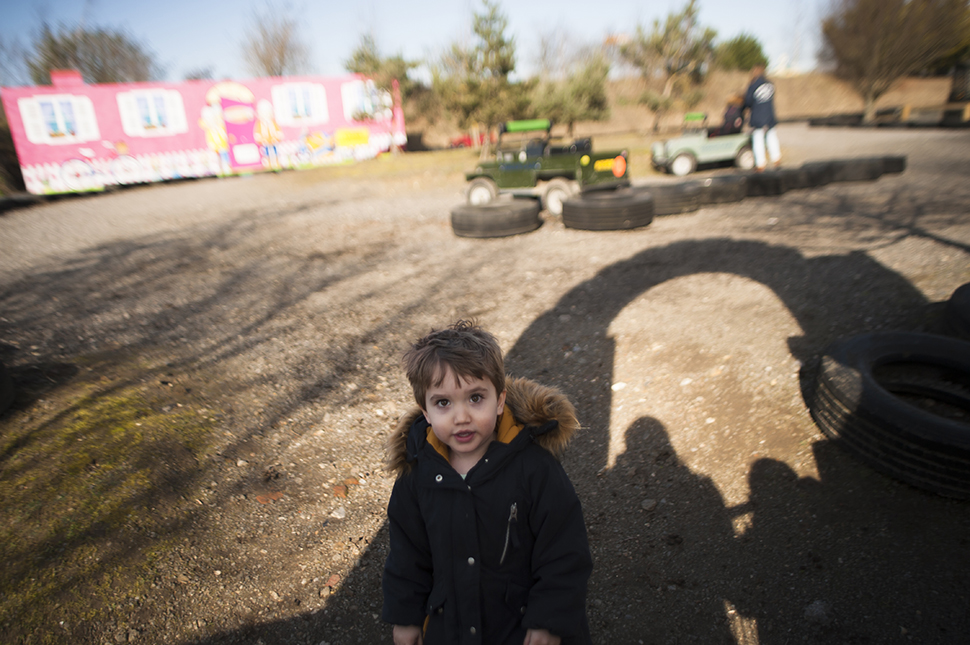 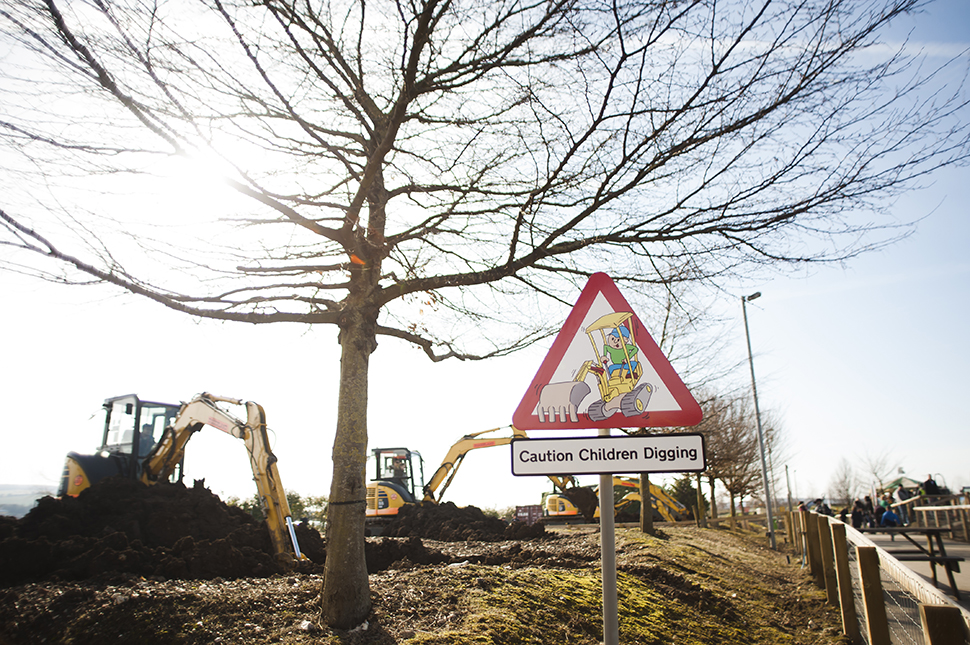 I should note that the experience would have been even better had they either been taller than 110cm or had an adult to each child.  There were rides (all of the digging experiences, the Go Karts and the Bumper Cars) where the rule for admission was that you had to be taller than 110cm or have an adult’s lap to sit on.  The boys were – mostly – very polite about their disappointment but they were gutted not to be able to go on the faster rides. 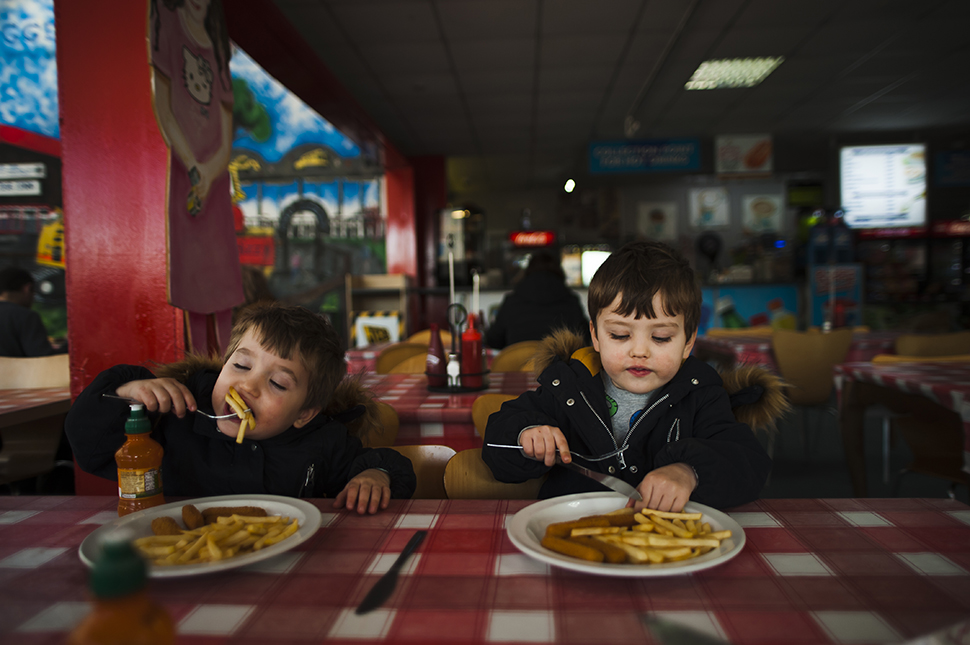 The canteen was lovely, with a really varied menu for vegetarians and vegans.  I had a vegan burger and the boys had Quorn fishless fingers and then stole all of the salad from my burger.  There were healthier options but it felt like a beige food kind of day, and I wanted them to eat a hearty lunch as it had been a long time since breakfast and would be an equally long time until dinner.  The serving staff were again kind and friendly, talking me through the vegan options and making recommendations.  When Lysander spilled an entire bottle of water across the table and floor and then burst into tears they couldn’t have been more helpful, reassuring him (and me!) and mopping up the mess.

The cost of the food was about the same as any other fast food place and as we don’t eat out much, I was happy to pay for it. 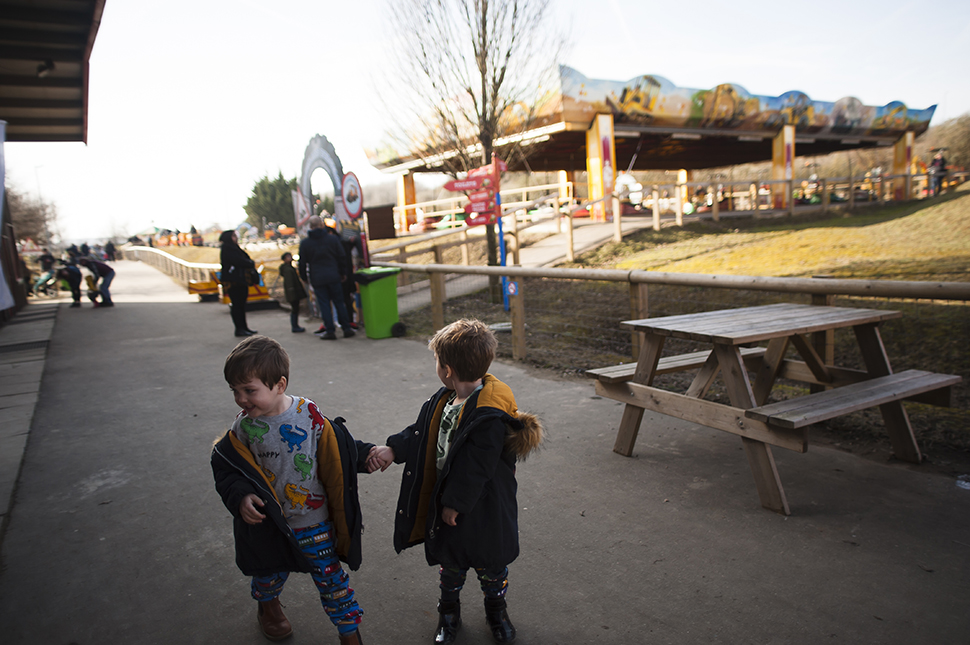 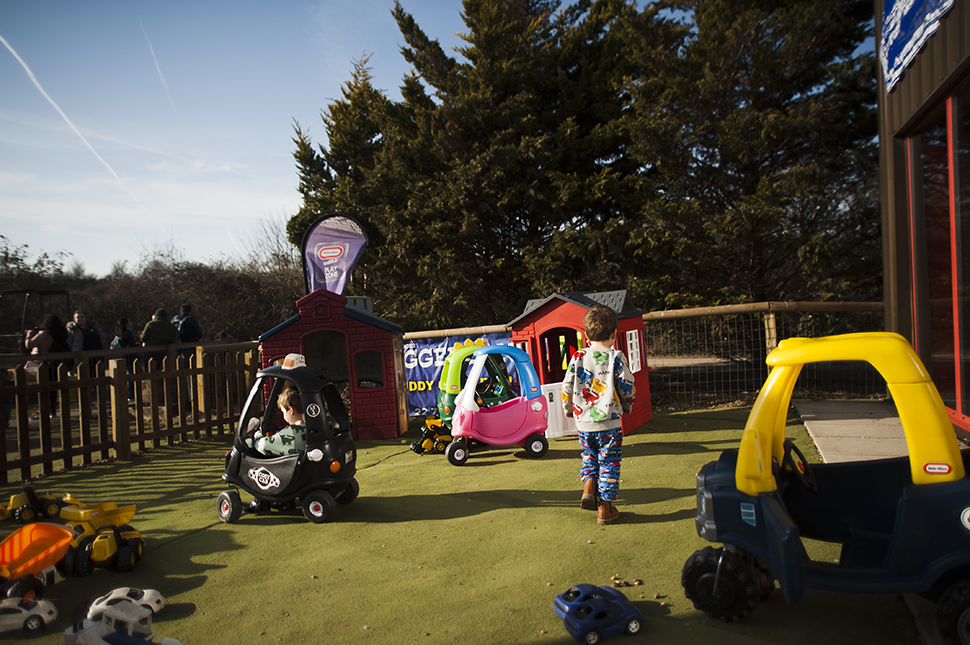 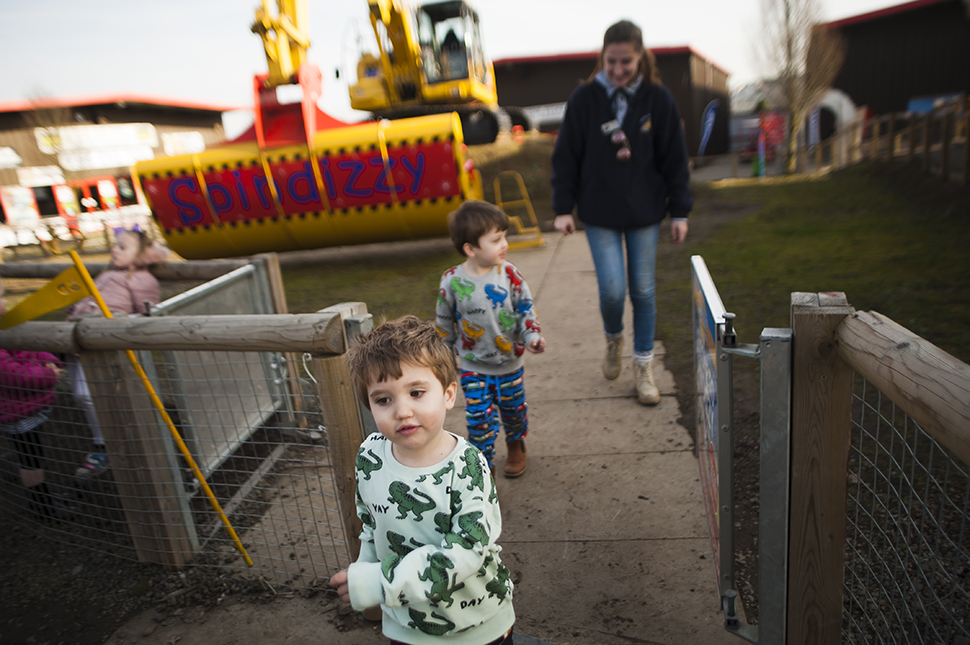 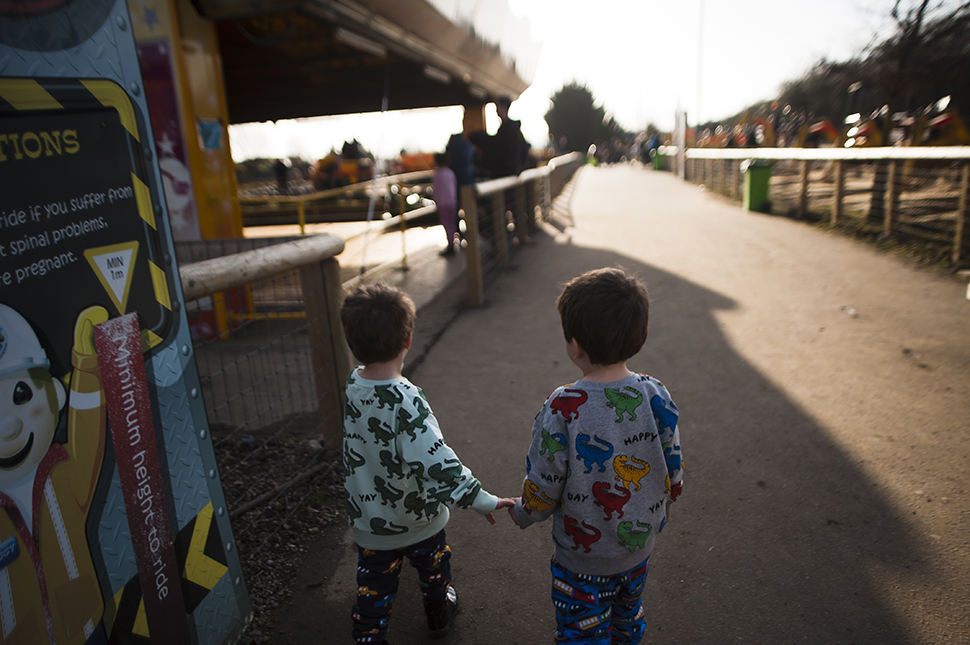 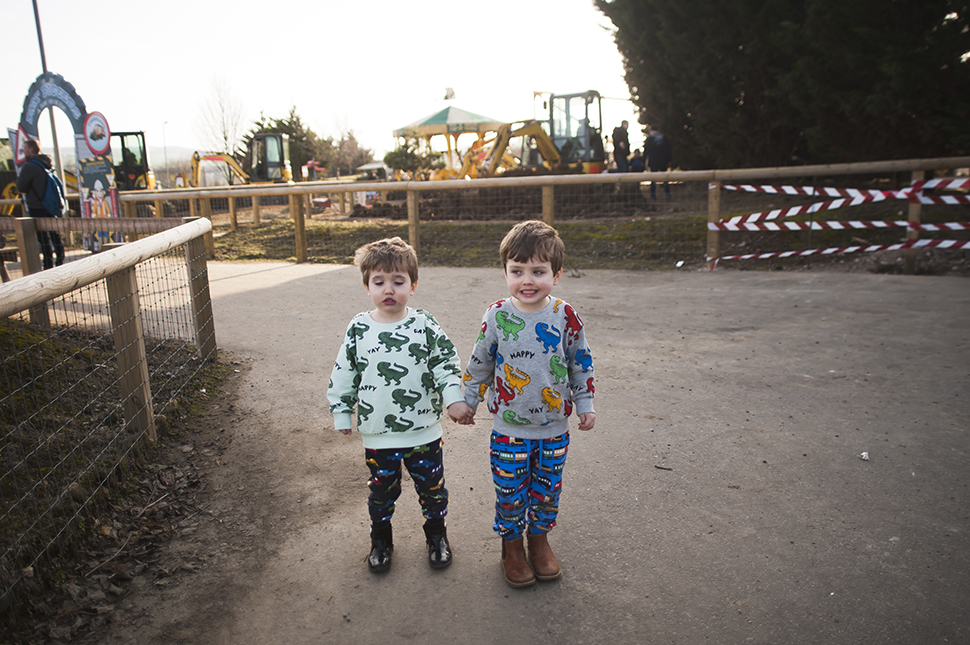 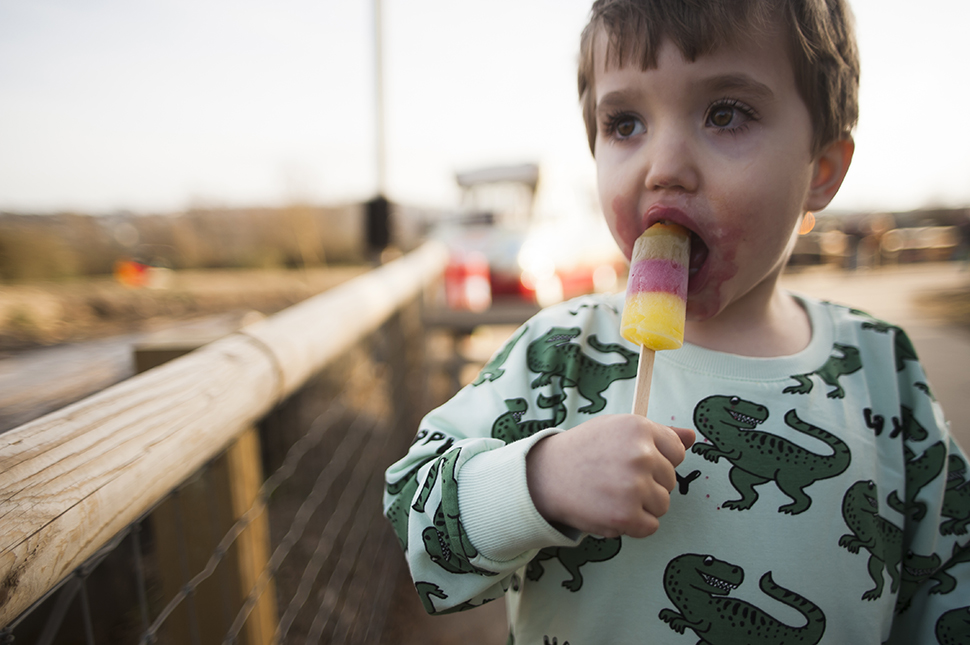 After lunch, they spent about an hour in the soft play whilst I emptied my breasts – I usually express every three hours and it had been about six, so my boobs were enormous by that time..!  There were seats in the building that housed the soft play, but I wished that I had been really clever and picked up a coffee from the canteen next door.  The boys made some little friends and had a grand old time chasing each other around.

Outside of soft play was the Little Tikes Wheelz Play Zone.  It really surprised me how much they enjoyed this little area; it’s intended for children under five and they’re four and a half and have mostly outgrown similar toys at home.  However, they really enjoyed playing with the toy diggers and dump trucks and spent easily half an hour there before I pulled them away for a second go on some of the rides.

At £23.95/person for admission it’s not a cheap day out, but I was impressed that once you’re in, with the exception of food (and you could, I suppose, take a packed lunch) it’s easy not to spend any more money.  That said, there is an ice cream van parked right in the middle of the theme park and my boys were adamant that they needed one.  We arrived at 11am and left when it closed at 4pm, and actually we could easily have spent at least another hour there.

On the whole, it was a superb day out and one that I would do again – though at that price, it would be a special weekend treat or to mark an occasion.  The boys still talk about it often, so I’m sure that we will find ourselves back there before too long!