An open letter to Dolce and Gabbana, who said the following on Sunday:

‘“I’m not convinced by those I call the children of chemicals, synthetic children.  Wombs for rent, sperm chosen from a catalogue’.

Here are the embryos that would later become my sons. 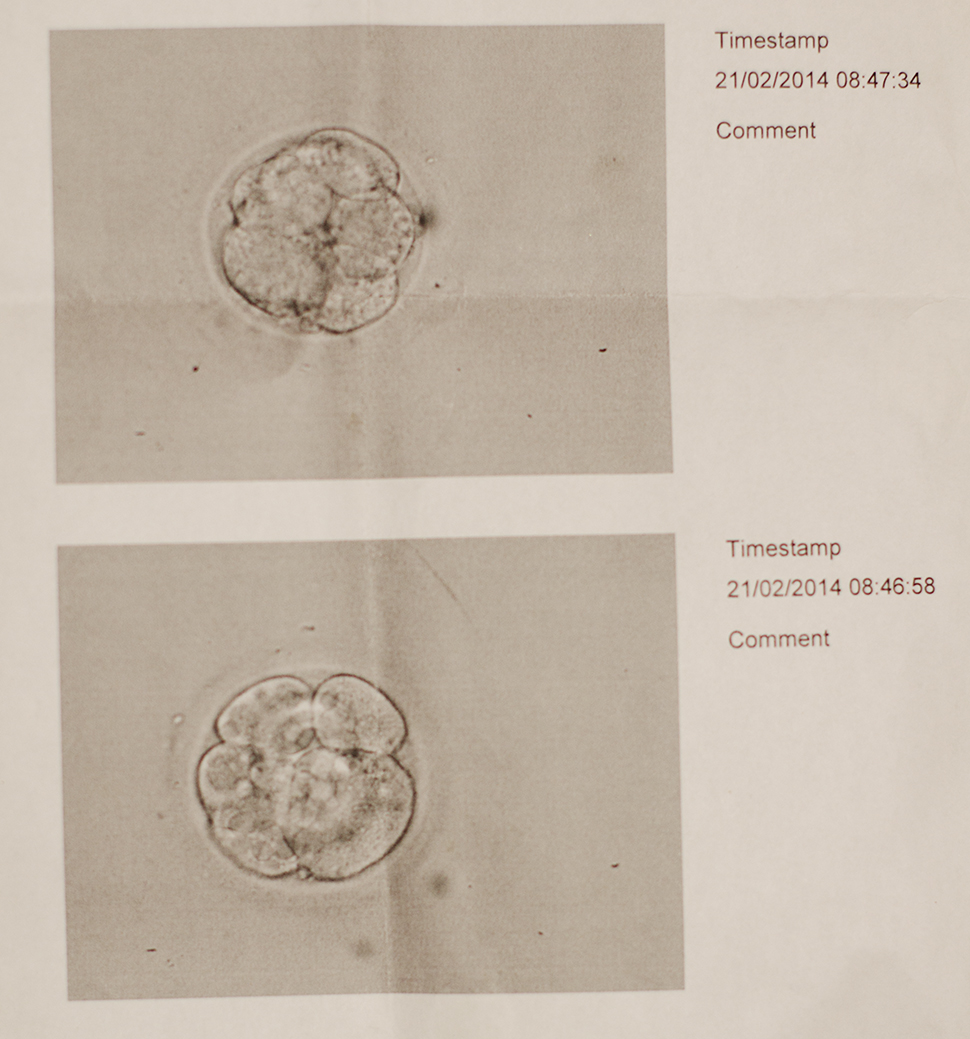 The embryologist sounded optimistic as he described them to me – one perfect little embryo and its technically imperfect sibling, whom I was not to worry about because the cells could just be dividing in preparation of growth.

I studied this picture as the doctor placed the embryos in my uterus using a catheter and ultrasound to ensure that she found the correct position.  As I lay back on the table, I felt overawed by the potential of these two tiny lives – who they might become if only the odds fell in their favour.  On the walk back to the office I was willing them to take.  In actual fact, both did.  Seven weeks later we were delighted to see two tiny hearts flickering on screen and after thirty-eight weeks of pregnancy we welcomed Balthazar and Lysander.

We felt, and feel, tremendously fortunate to have these two tiny people in our lives.  But more than that, it feels right.

We were meant to be parents.

My partner is the primary caregiver and feels no less of a mother in spite of her children originated from a ‘rented womb’ (mine).  I watch her with them and there is no doubt in my mind that she is a truly wonderful mother, a better mother than I am, despite her lack of genetic link to our children.

The sperm that we chose from that catalogue was the subject of much angst and many a discussion, for us.  Like any mothers, we wanted the best for our baby.  We wanted them to be greater than us, to have advantages that were not available to us.  We chose a donor who had a clean medical profile, of course, but we also looked at what might bring a child closer to us.  We chose a donor who was musical, because Kirsty is musical.  It made me smile that he favours dogs – our dogs have always been members of the family.  We chose somebody who wrote a beautiful message to children conceived using his genetic material, who would welcome them if they came knocking at his door as an adult.

I may never meet our donor but every night, I list him as one of the people who cares about our children.  I tell them that he brought them into being, that he wanted them to exist and to thrive.

It seems to me that you think of IVF as a cold, clinical act.  I urge you to reconsider.  When you think of IVF, think of how deeply a baby must be desired in order for somebody to sign up to such a medically invasive treatment.  Imagine having your hormones altered, stabbing yourself in the stomach twice daily with needles, vials of blood drawn every other day for a fortnight.  Imagine being knocked out by general anaesthetic in order to have a needle pierce your follicles and suck out your eggs, and then being woken up to be sent home, still shaking, still bleeding.

Imagine how wanted those babies are.  Babies created through love.

Many babies created in penis-in-vagina situations aren’t born in love.  Many babies grow up to not consider their fathers (or indeed their mothers) to be family.

Our babies will always know that they were wanted from the start.  From years before the start.  They will know that we saved for years in order to afford donor sperm and IVF treatment, forgoing holidays, sleeping at times on my wonderful in-laws’ living room floor in order to minimise costs on rent.

Thanks to the advances of modern medicine and the generosity of a stranger who believed that families are created through love and not penis-meets-vagina, we are mothers.  We are a family.

IVF is perhaps as natural as an organ donation or a kidney transplant – or, indeed, wearing clothes.  And it is a beautiful thing for many families.

A child needs a family.  They need a parent.

They do not need to be parented by a penis and a vagina.

I am sorry that you are so narrow-minded as to reduce parents down to their genitalia.  I am sorry that despite your sexuality (you are both gay) you are unsupportive to those of us who dare to raise children in what can sometimes be an unwelcoming environment.  Mostly, I am sorry that you have enough of a public platform that when you air these ignorant views, they are given attention.

I am so glad and grateful that most people don’t share your hateful views.  That my colleagues were nothing but supportive and excited for me.  That my deeply religious grandmother took the boys into her arms and into her heart.  That most people respond with positivity when told that actually, we’re both mum.  One kind woman went out of her way to say how lucky our boys were to have two mums.

I urge you to get to know some same-sex families.  I think that if you met us, if you cuddled my happy, secure boys and saw the love in my partner’s eyes whenever she so much as glanced their way, you would reconsider your ignorant views.

Then again, if being ‘synthetic’ or ‘chemical’ is the worst label that my sons are given, perhaps I’ll take it.  At least we can laugh about it.

One of two mums to Balthazar and Lysander 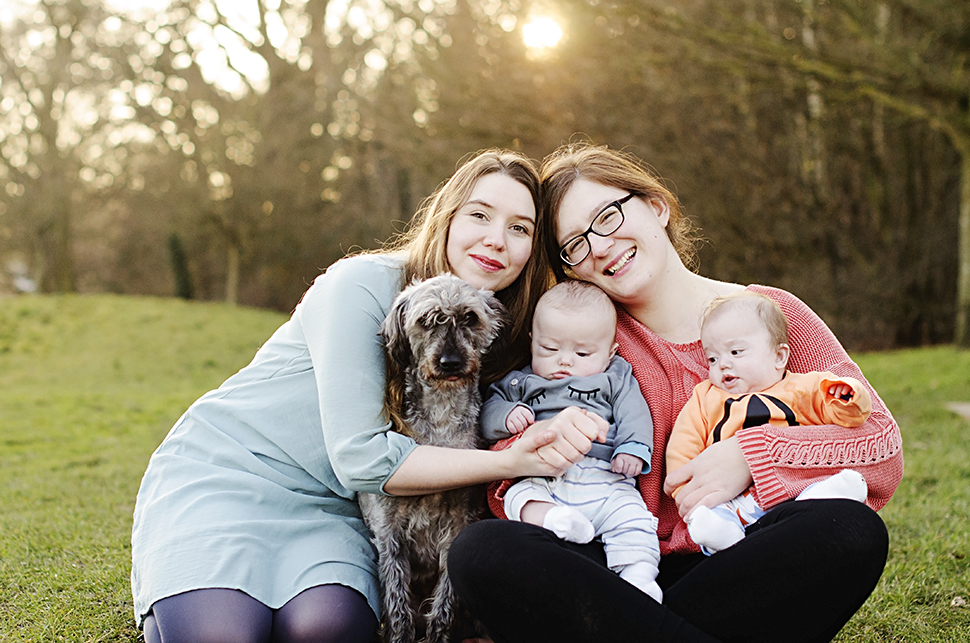 The Twins in March

Twice today I’ve come across articles that make me wonder what century we are in. I really can’t understand why anyone would have a problem with IVF. Your family is beautiful and no one could doubt your desire to be parents! I don’t know why people say such thoughtless, stupid things. No matter how a baby is conceived, it is a real baby. Your sons will know more about their biological father than a lot of babies conceived in the traditional way.

This post made me get tears in my eyes Amber. So beautiful. And completely and utterly true. x

What a wonderful post. Thank you for explaining so well what the rest of us were all thinking! Full of truth and love. What lucky boys you have.
Helen. x

How beautifully put, couldn’t have said it better. IVF is incredible, and brings so much joy to parents that may otherwise never had children.

A beautifully honest read, thank you.
I was so astounded by the headlines this created, I was astounded because someone held these views, but more that people in a position of influence felt these views should be voiced, to influence or to antagonise others.
My husband has never had a father figure, there is no name on his birth certificate, and whilst I know I do not need to add- he is a wonderful person. But, this is honestly, there has been an odd balance as we figure how two parents feature in our children’s upbringing. He has suspicions about his father, but he has known ‘forever’ this is not a subject to raise with his mum.
I have no idea how people can comment, and impact others, with their views, I find it truly amazing that people feel they can sit in judgement- to me, that is not our role in this life.
But more so, as you articulate so much more graciously, how anyone can question the love and positivity which surrounds an individual as they are borne and succeed.
Thank you for saying this. xx

A very touching and powerful post!
I can not agree with you more, I never had to go through your pain or grief or worry but I can try to empathise how much of a struggle you had to have your beautiful very WANTED and LOVED children.
Lots of love,
Carla
xxxx