The Truth About Having FIVE Children [AD]

[This content was produced in collaboration with Center Parcs, as a part of their #thisisfamily campaign.  In lieu of payment we have accepted a short break.]

It is the middle of the night. Again. The world is almost silent, punctuated by the baby’s soft suckling noises and the rhythmic purr of the breastpump. These quiet two-am feeds are my favourite, a rare opportunity to focus my attention solely on the baby, but tonight I am distracted, I am working again. The iPhone in my hand emits a soft glow, illuminating my daughter’s face. She is such a little thing, her cheek against my breast, her face peaceful.

Beside me, my partner is sleeping. Her hair is a dark sprawl across my pillow. Were my hands not full, I would play with it – I like to be touching her, always, when we are together. It makes people laugh. But I don’t get enough time with her; I like to make it count.

In the next room, my sons are tucked in together. They have fallen asleep fighting, like puppies; at this age they are everything to each other, the best of friends and the worst of enemies. They won’t sleep apart, even at opposite sides of the room. They sleep kicking each other’s legs, like they did in the womb.

And in the room beside that, my daughters sleep restlessly. Olympia, with whom I am always deeply in tune, seems to know when I am awake and often calls to me in these small, silent hours. And Embla, her own twin, wakes when she does, a quiet little girl with pale eyes shining up at me when I peek into her cot.

As I work, as I feed, I listen for them. In case they need me.

People often seem fascinated by our family. I suppose that we are just unusual enough to capture their attention. We are more-than-average. More mothers than average, more children than average. We don’t do things by half. We go all out, else we don’t go at all.

We don’t sleep much.

So many people have asked me recently what it’s like, mothering five children. As part of the Center Parcs #thisisfamily campaign, I thought that I’d take the time to talk about us. In the cold, quiet, honest hours. In the middle of the night, whilst my family are sleeping.  The ugly truth, and the parts that make it beautiful. 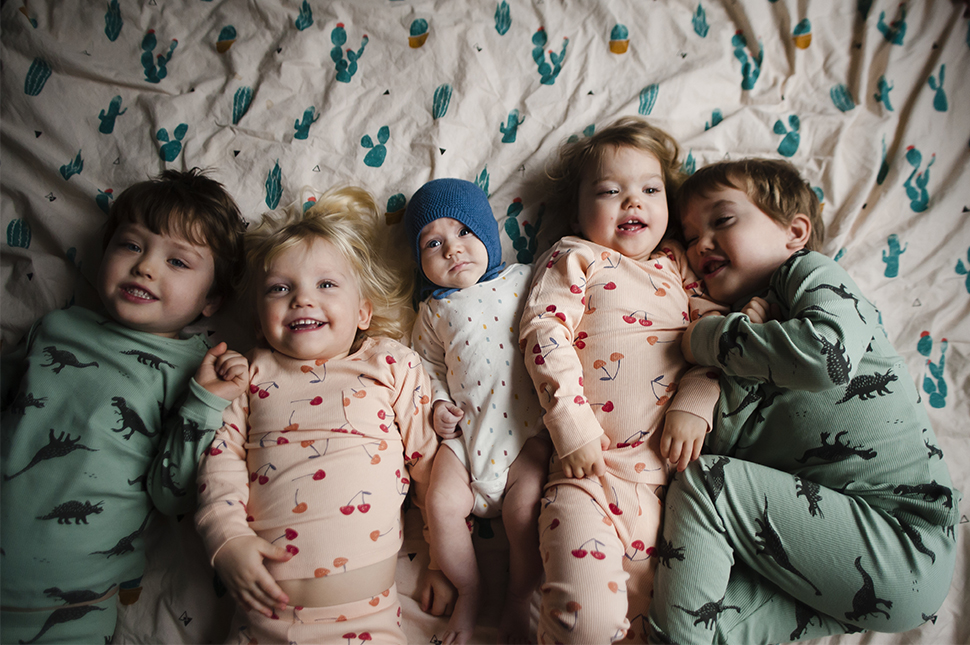 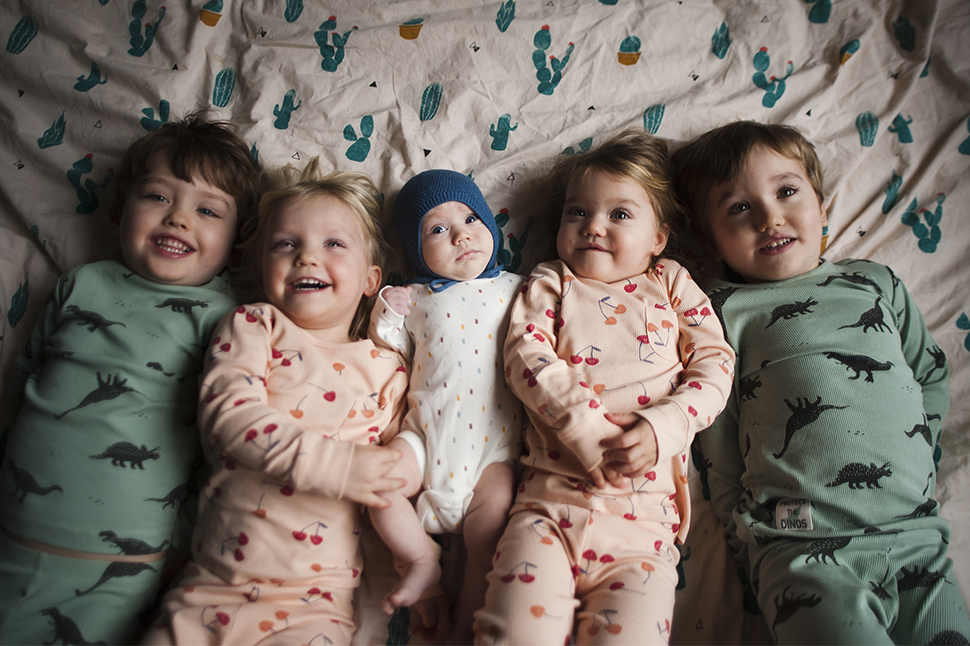 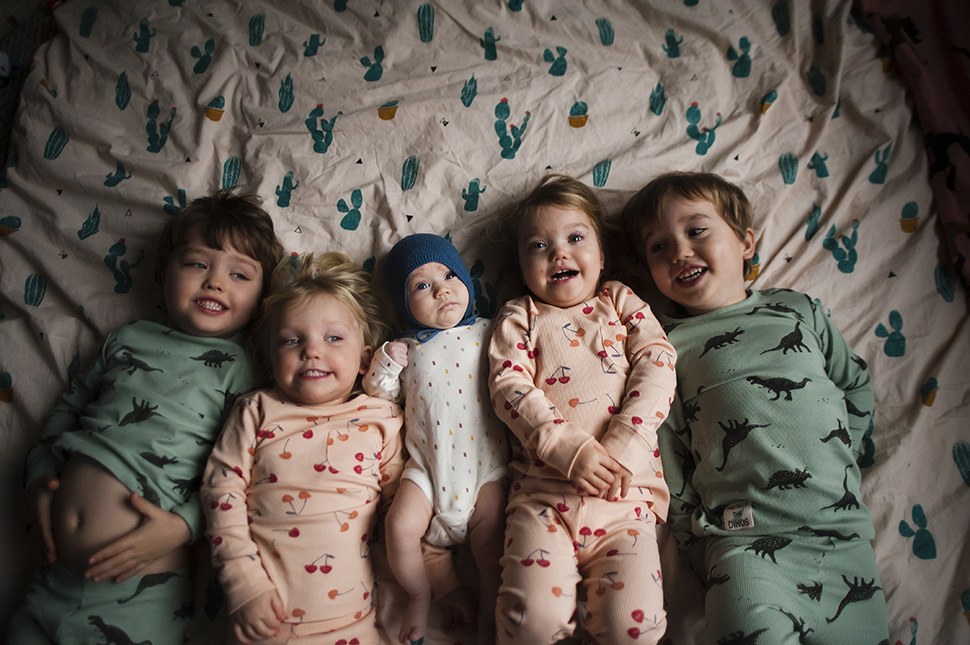 Five children means that sometimes, nobody gets out of their pyjamas until bedtime.  If their teeth are brushed (the big four) and nappies are clean (the small three), they have eaten a vegetable or two and laughed a lot, sometimes we consider that day a win.  Five children means that nobody wears matching socks, ever.  And if they do, we tease them about how fancy they look, swanning round the house in their two socks the same.

It means that there is always somebody to play with, even when you don’t particularly want to play.  It means that your house resembles the lovechild of Hamleys and an episode of Hoarders, but that you are always being asked to share.  With seven people in the house, there is almost always birthday cake.  Or half-birthday cake.  Or I’ve-wrangled-five-children-ALL-BY-MYSELF-and-I-need-some-damn-cake cake.

Having five children means that the house is loud!  Somebody is always chattering, laughing, crying, running around.  Navigating the house is like playing on one’s own permanent obstacle course; there are more toys in our house than in the North Pole in the first week of December.  And yet somehow, inexplicably, they can never find the toy they want!  Sometimes I feel like I am drowning in them, in a sea of children.  They remind me of the scene in The Lion King where Mufasa is dodging the antelope lest he be trampled; I feel trampled.  I feel as though I am clawing at the cliff edge, desperately trying to keep my head above the children and the constancy of their needs, their wants, their chatter.

And sometimes I feel like I am literally living a love story; I look down at them all, my paper-chain of children, and I am a vessel filled to the brim with wonder.  I made you.  Sometimes, in the middle of wild play, Balthazar laughs and tells me in a tone that is half amused and half exasperated, “So many children!”.  And I recognise my voice, because I say that all the time.  So many children!  I open my arms and they send me flying; Lysander, at the end of a growth spurt, suddenly half a head taller than his twin, and Balthazar, like a coiled spring, his face in mine and Olympia, climbing my shoulders to sit, laughing, on my head, her fingers tangled in my hair and little Embla, who just wanted a cuddle, and my arms come down to encircle her protectively.  And I am laughing, and they are laughing, and there are limbs flying everywhere to grab, to tickle, whilst they scream and pretend that I am a monster, a dinosaur, a horse to ride.

I don’t know how I got so lucky.  That is the truth.

In the bleakness of night, when I cannot sleep, I torture myself; what would I do in a fire, in a sinking ship, how would I save them all, which would I choose.  There is a point at at which I cannot pass, at which my brain balks like a frightened horse, spins itself around until I am forced to think about happy things, about Saturday mornings with the big four and all of the times that I have cosied up in bed to feed each of them and the baby, half-dressed, kicking her legs and laughing up at me.  There will never be a fire.  There will never be a sinking ship.  We are safe, we are safe, we are safe.

No matter how many times in the night the baby wakes me, the children don’t sleep in past seven o’ clock.  Usually I awaken to Lysander’s face in mine.  His expression is earnest, eyes like blue planets.  “Mummy, I have to tell you something.”  His brother hovers in the bedroom door, anguished; they are not meant to leave their room until we come for them, but somehow they always do.  The girls cannot open their own bedroom door; they make a game of climbing in and out of each other’s cots, stealing each other’s toys.  Their laughter is joyous.  And I am always torn between contradictory emotions: annoyance to be woken, and relief – my dreams were just dreams.  It wasn’t real.  Everyone is fine.  And I shake off the memories of my dream like a labrador as I sprint to the shower, brushing my teeth beneath the water as the shampoo runs down my back, as the chaos of the day consumes me, shoving feet in shoes and flinging on my coat and sprinting for the bus like a woman possessed, quick kisses in the doorway and “I love you”s called behind me but really – I am already on my iPhone, triaging emails, checking in with my boss. 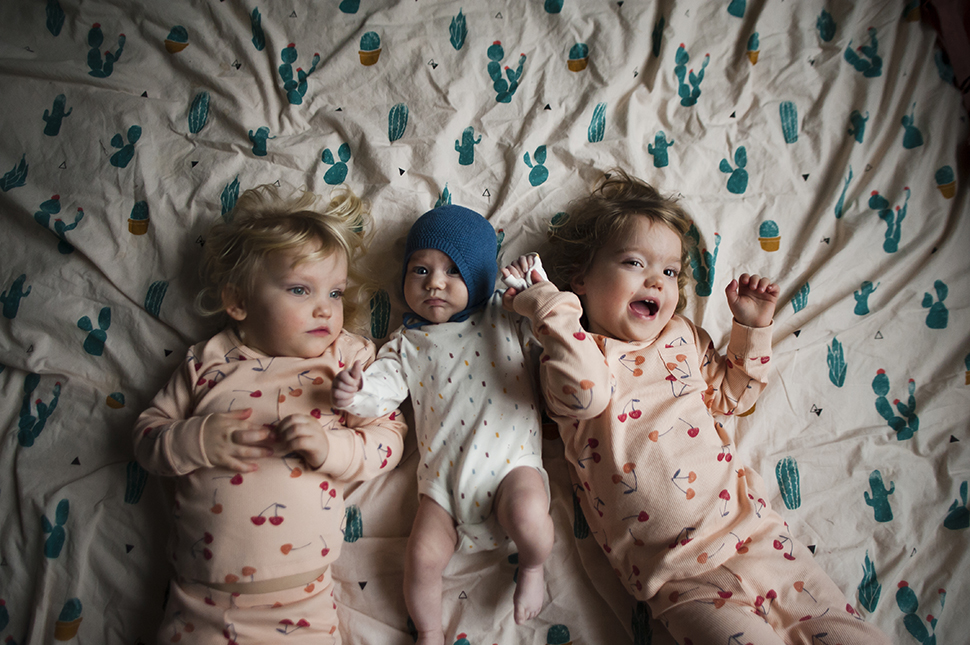 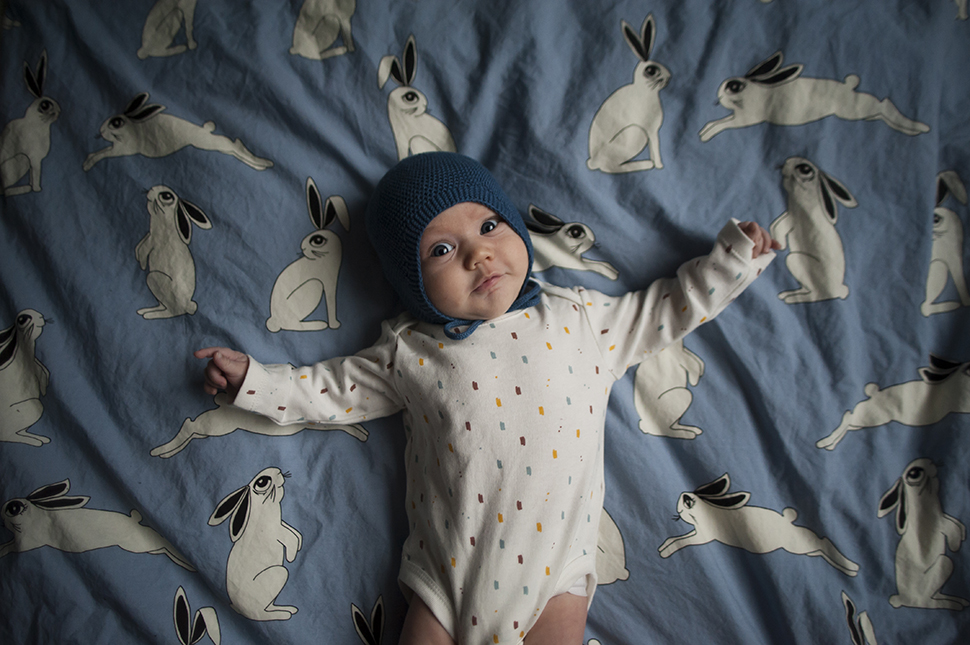 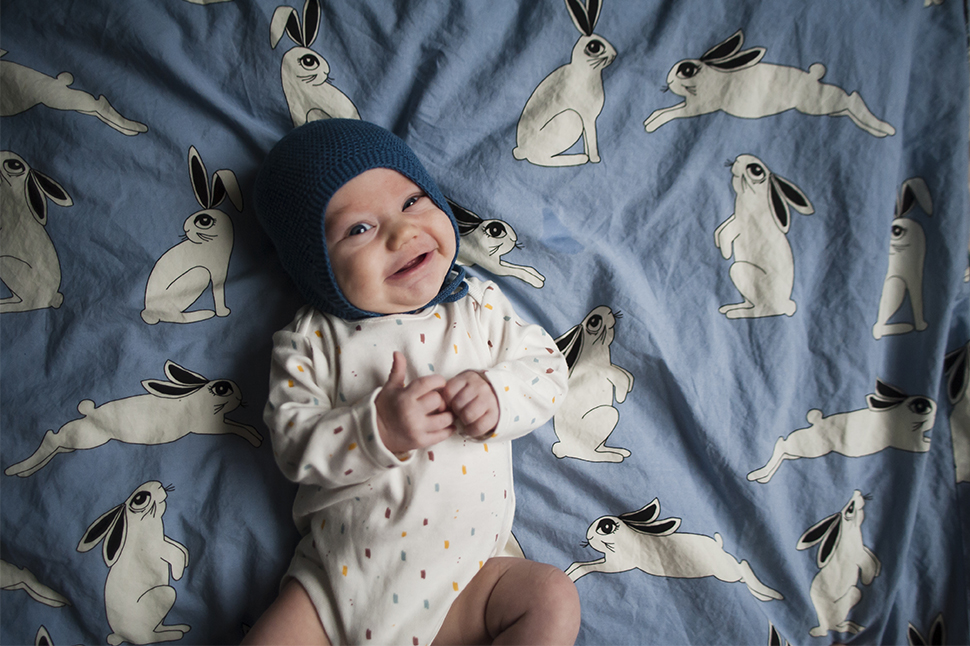 Before we had five children, I wondered how you could possibly love so many children without exhausting of it, the part of your brain or your heart that manages sentimentality just stuttering one day to a standstill.  ‘They’ say that the heart expands.  I wondered how it could stretch so far without splitting, ripping jaggedly, emotion spilling haphazardly across your relationships.

And then we had two babies born at once and after a brutal start, my heart did what it was supposed to do and wrapped around them like their womb once did.  We added another pair and it did the same.  And the baby..?  Well, she just fits right in – she’s everyone’s baby really; we can’t imagine life without her.  And there is still that last little embryo, frozen in stasis in Chelsea.  A baby whom, had we been bold enough, could have been Vita’s twin.

So there we are.  That’s the truth about mothering five children.  Or at least – this is my truth.

That mothering five is chaotic and crazy, messy and sprawling and positively bursting with love.  And I wouldn’t trade anything for this life of ours – no, not even sleep. 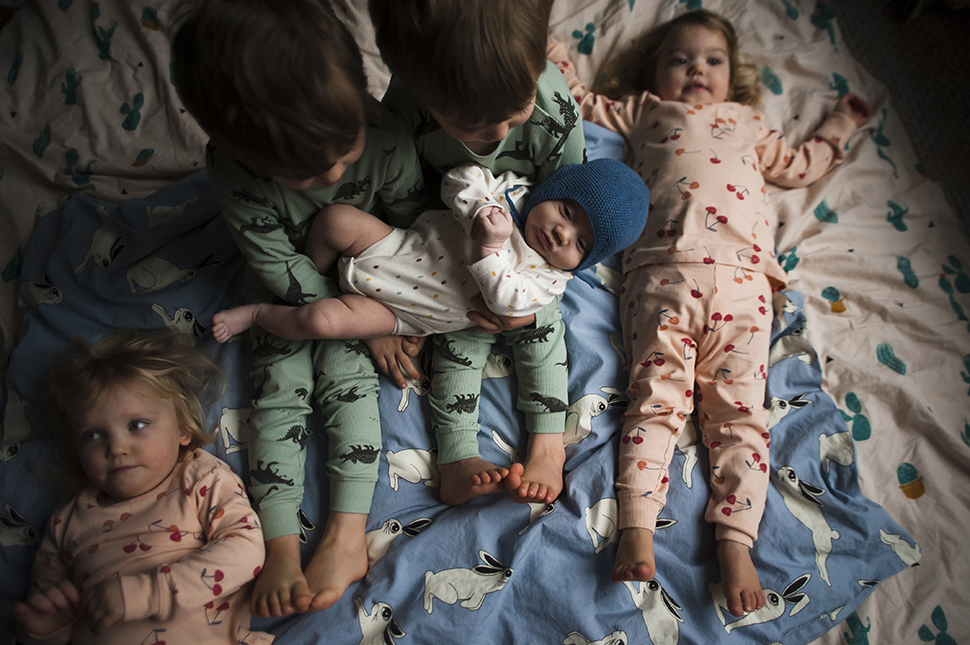 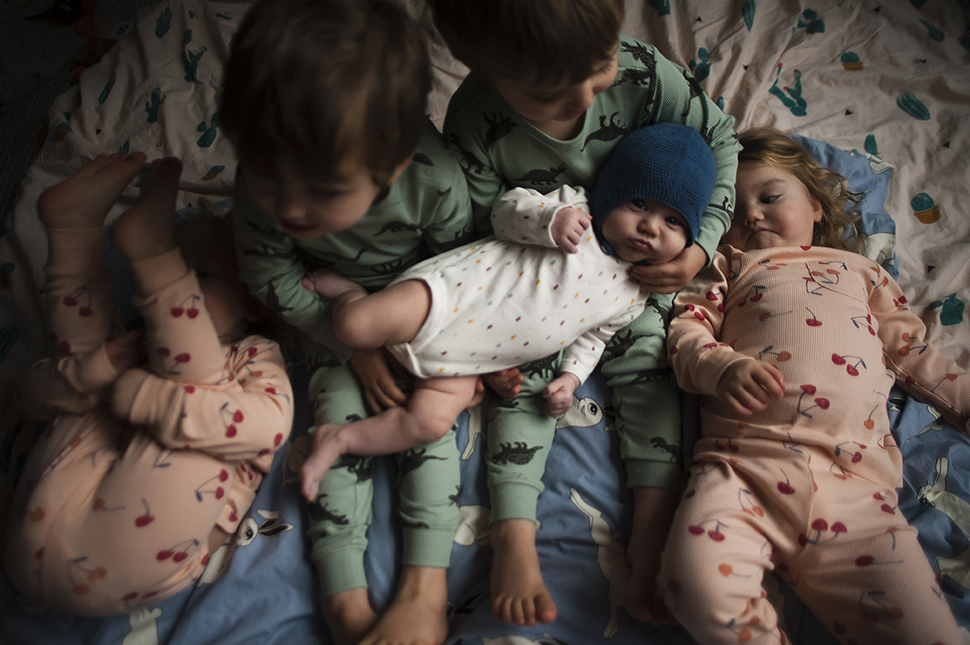 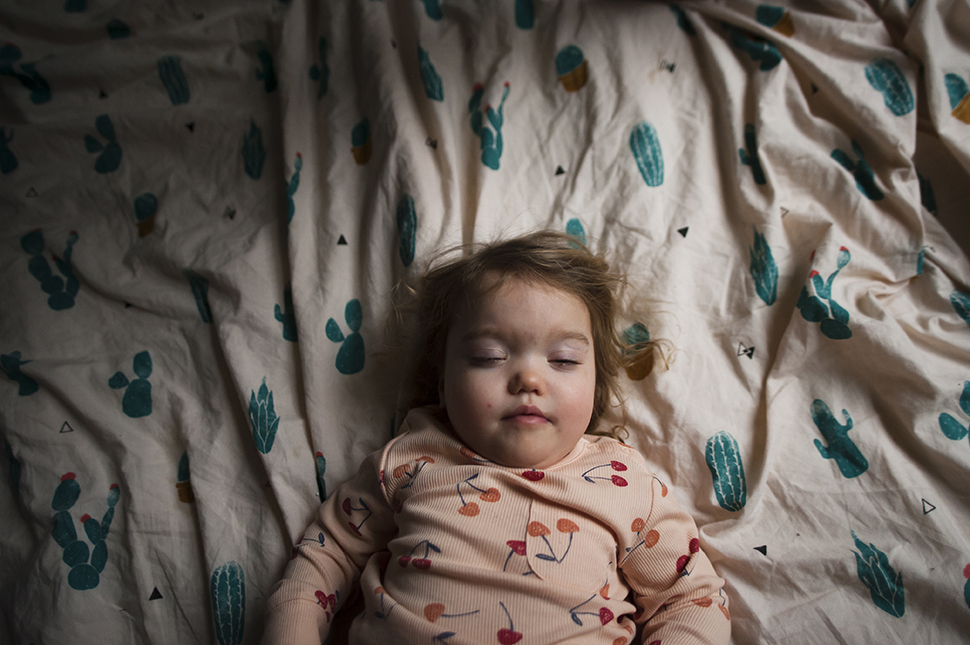 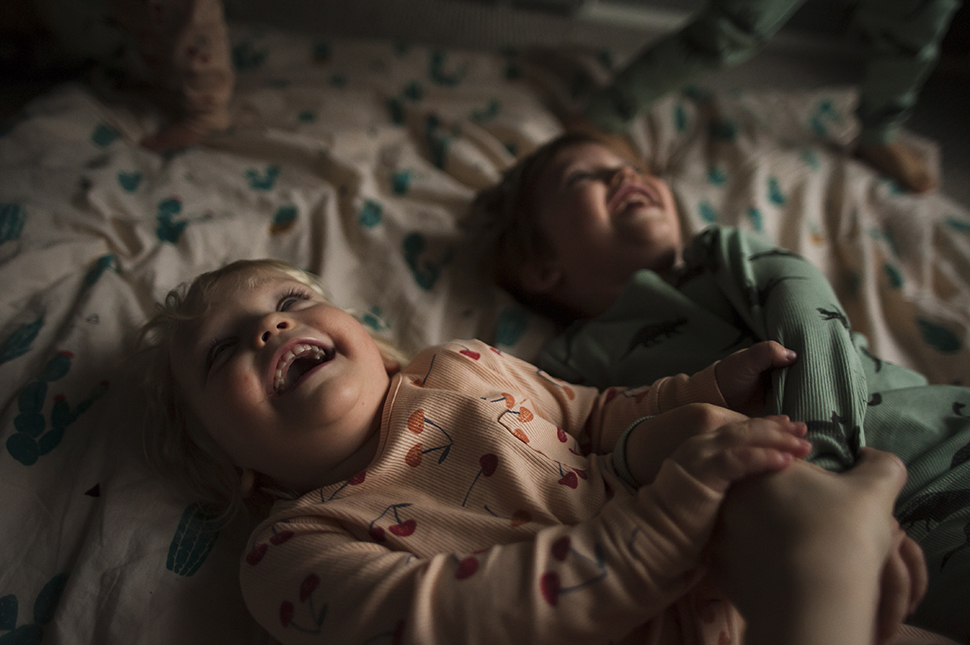 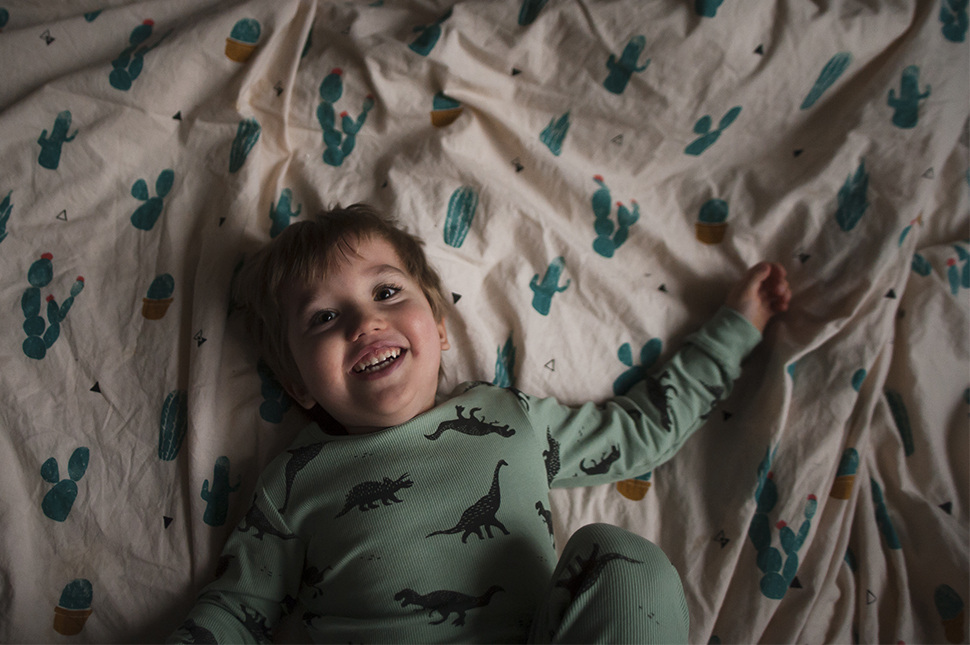 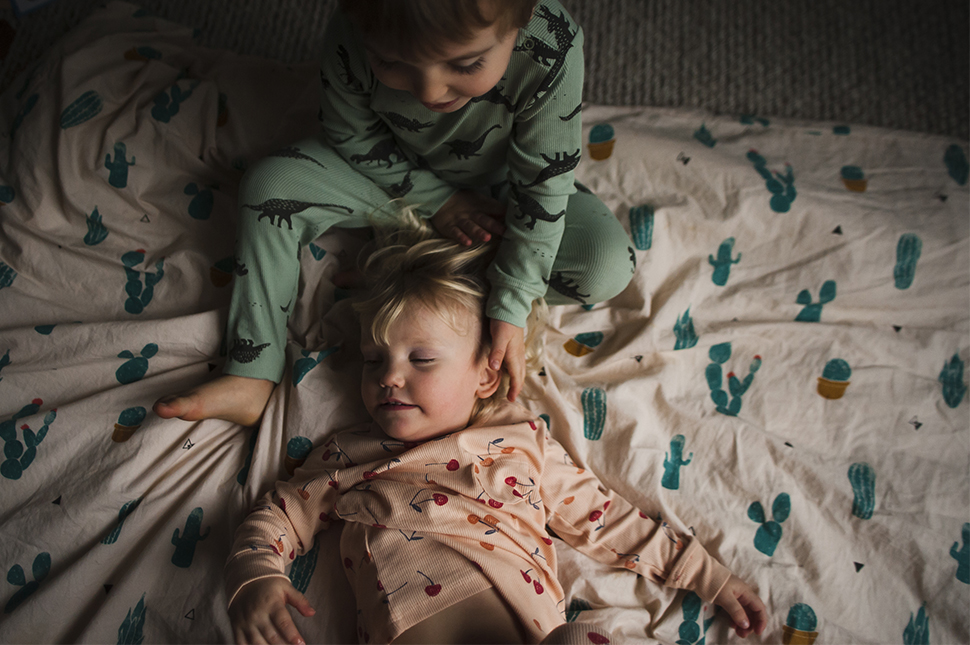 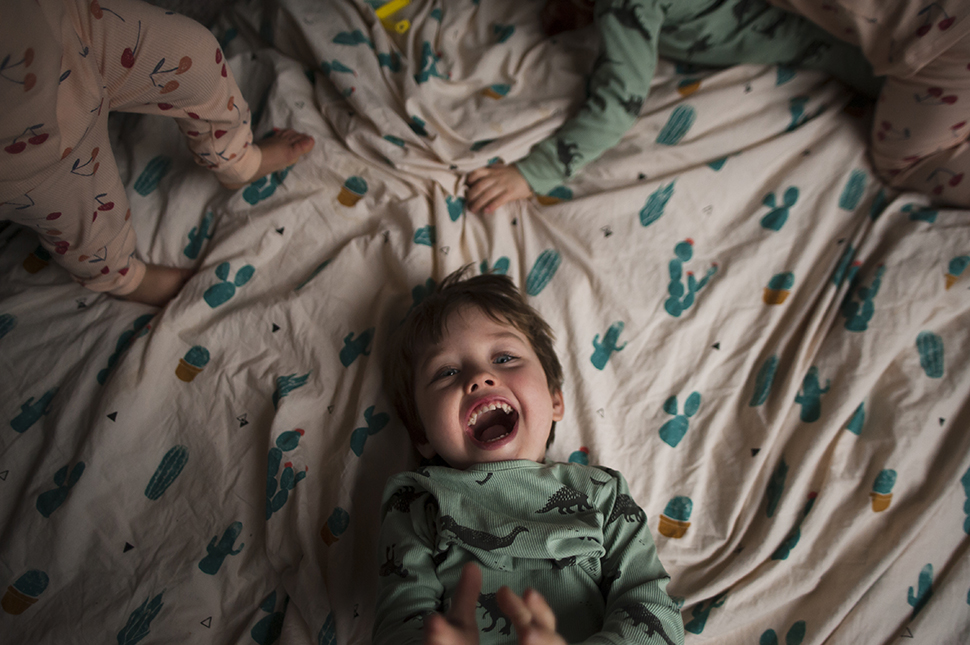 This is Family [AD]

Returning to Work, Expressing Breastmilk and Products I Use on my Breastfeeding Journey [AD]