I’m not much good at being a patient. I don’t mind the attention but I hate to feel incapacitated or a liability. Of course with pregnancy, particularly a twin pregnancy, one is never at their best and I’ve certainly had to let go of some of my standards at home and enable Kirsty to step up and shine a little, but I try really hard not to let it affect me at work. After all, it’s not their fault that I decided to reproduce, especially with multiples. My workplace is a kind place, an understanding place, and I know that if I said that I was feeling under the weather they would do everything in their power to make things a little easier for me, but for some reason I’m not very good at it.

Which brings me to last week. A few weeks ago, I caught some sort of vomiting bug. It was probably the sickest that I’ve ever been in my adult life but not even comparable to some of the nasties that I had picked up as a child so aside from feeling a little sorry for myself and very guilty to have to call in sick to work, I wasn’t too bothered. After all, a day or two of not really eating or drinking never harmed anyone really. Or so I thought.

The next morning I managed to get dressed without being sick so I decided to go in to the office. I had to sit on the floor of the train after I started blacking out but I do that quite often even when I’m perfectly healthy and sometimes when I’m not even pregnant so alarm bells didn’t really ring to suggest that I should go home. I don’t remember much of that morning aside from colleagues noticing my white lips and asking repeatedly if I was okay.

At some point around lunchtime I started feeling a little stranger. The pins and needles in my fingers and toes were spreading and I had them in my tongue and gums as well. I walked to the bathroom to get away from everybody and ran my hands under the cold tap. Then I blacked out.

I don’t think that I was out for long. I think that I must have been coming round already as my colleague realised that I had been gone for a while and, with the help of another colleague, used a pair of pliars to break in to the bathroom. I remember somebody holding my head to the side and then, as the room wobbled into place, realising that all of my bosses – including one very senior one whom I hadn’t yet met – were peering in worriedly and talking about ambulances.

That woke me right up. I quite like hospitals, but I had things to do that afternoon. Apparently the first thing to go when my blood pressure drops is my common sense. So I got up and insisted that I was fine to work. Because I was awake now, so why wouldn’t I be fine to work? We negotiated briefly and it was agreed that I could stay for the ceremony, which was why everybody was in the office anyway and due to happen any moment, and then I had to pootle off to hospital and get checked out. Fair, I thought. And I couldn’t exactly chain myself to the desk.

So naturally I decided to very almost pass out again during the ceremony.

And after that I found myself being sent off super-smartish to hospital, where A&E take collapsing women very seriously. It was the evening by that time and I had expected a long wait but I was seen by a doctor within an hour, and was having needles poked into me for intravenous rehydration within two. 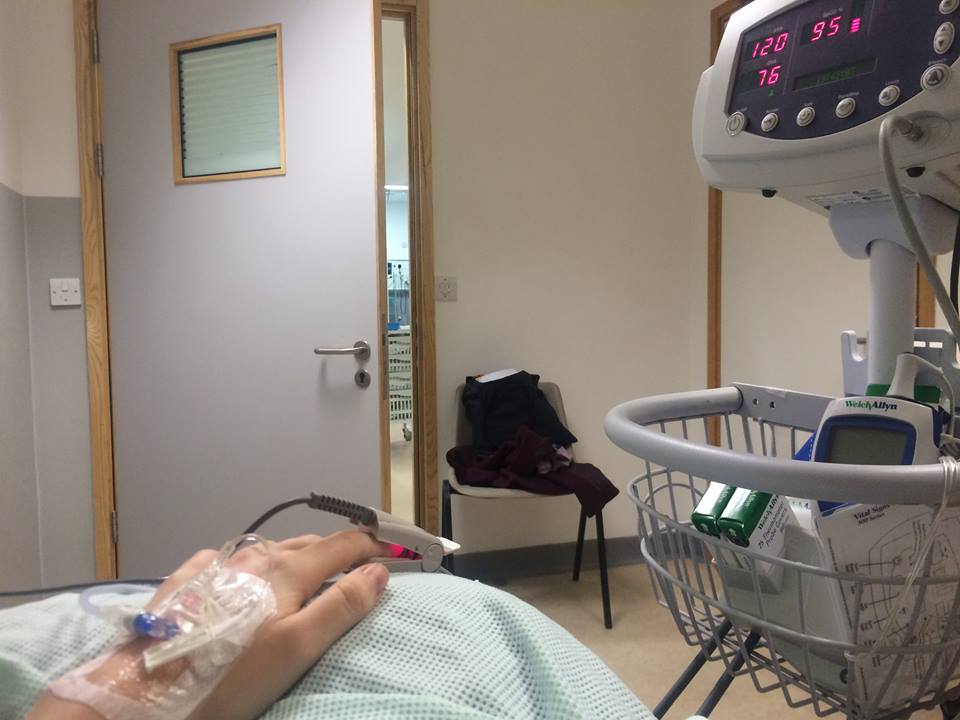 Note: if you have bad veins already, acute dehydration will make them impossible.

It’s been just over two weeks now and the bruises are still quite apparent although the scratch on my face from where I fell has more or less healed. I’ve learnt to take it a little bit easier, that nobody wants the new girl fainting in the boardroom. I’ve learnt that my limits are a bit closer when I’m pregnant and that if I disregard them completely, I’ll probably regret it. Mostly I’m surprised that it took me until the second go around to learn this lesson.

So today I am practicing recognising my limits.  It’s a Saturday morning and we’re eating pastries, watching Love Actually and having a really flipping lazy morning.  It’s rather delightful, actually.  In future I plan to do more of this.

Have you noticed that illness flattens you more when you’re pregnant?  How do you overcome it, or do you just go with the inconvenience?

So You’re Going to be Big Brothers

[…] at The Goblin Child (U.K.), who already has twins with partner Kirsty, writes of “Illness in Pregnancy,” sharing her own recent experience and asking, “Have you noticed that illness flattens […]

Thanks for sharing your story! I featured it on my blog this week. Hope you’re feeling better!