I’ve been thinking a lot about body image and positivity recently, in part at the behest of Channel Mum who asked me to collaborate in their #DontBullyTheBump campaign but also because in my twin facebook groups there is always so much anxiety about bodies – how much they can take with a twin pregnancy, and what the damage will be afterward.

I have had two twin pregnancies now and I don’t feel damaged, but of course my body has altered. The skin on my stomach is looser and I have developed new stretchmarks each time, my breasts look fantastic now as I’m currently feeding two babies but once I stop feeding they are definitely going to show the effects of having nursed two babies. My ribcage has expanded, which was the most painful part of each pregnancy (excepting the births of course). I don’t look the same now as I did when I turned twenty-five and decided to get knocked up.

I’m not horrified by my body. But I am fascinated by it.

As a teenager I spent a lot of time at war with my body. I think most of us do. But my body dysmorphia was quite extreme. It took me a long time to train myself to stop out of those thought patterns, a long time to even want to. And I’ll have to live with the damage that I inflicted upon myself forever.

I have no intention of going back to that place.  Some people might mistake that for arrogance or narcissism but it’s not – I have simply learnt that if I don’t take care of my own mental health, nobody else is going to be able to fix it for me.  I have been the adolescent who couldn’t step outside of her own front door without cringing, who couldn’t walk around a shopping centre for the shame that strangers might see her there and assume that she felt that she was worthy of clothes.  Of nice things.  As though the right to walk down the street in one’s own body was something that had to be earned.

It’s been ten years and I’m so far from that person now that I barely recognise her, but I’m sharing this for context, because I think that it’s important for you to recognise that I’ve been there, I know what it’s like to avoid my own reflection in windows, to want more than anything to just be a brain divorced of a body.  And what was the point?  I wanted to be more lovable; people would have loved me more had I loved myself.  And had they not?  Sometimes you have to be your own best friend.  Sometimes you had to love yourself first.

When I am pregnant I am probably at my most physically confident. I have so many friends who have struggled to carry their twins, sometimes tragically, and whilst I don’t feel smug about my own easy pregnancies by any stretch of the imagination I also don’t take for granted that my body has been able to gestate two sets of twins to term (past term in the case of the girls!). My body is an incredible vehicle and of course I feel proud of what it has achieved. Why shouldn’t I?

The boys’ birth didn’t feel like a birth at all, just a vaguely unpleasant surgical event, and I struggled with feeling that my body had been robbed of something important. When the girls were born it was far more traumatic, at least on paper, but I have so many beautiful memories of the days that lead up to the birth and of the day itself. It’s really enhanced my confidence in my body, especially as with the girls coming so late I was beginning to wonder whether my body was capable of going into labour by itself at all.

Channel Mum asked me to make a little video talking about body image, which you can see below. It includes some underwear clips of what my body looked like at full-term with the twins, and what it looked like twenty-four hours after they were born.

I’m hoping to document the changes in my body over the next few months as it settles to a new normal, to satisfy my own curiosity mostly but I thought that my fellow twin parents, particularly those who are still expecting, might find it interesting to see.  Everybody is different, of course, but if you are looking for some idea of how you might look at the end of a twin pregnancy and immediately after, here it is.  The (almost) naked truth. 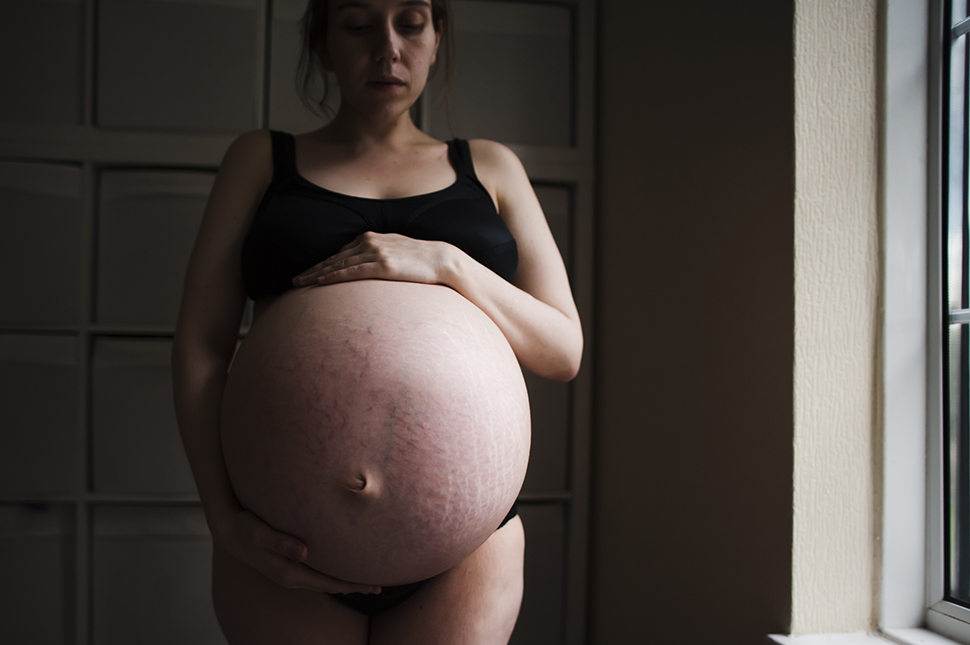 Twenty-four hours after the birth: 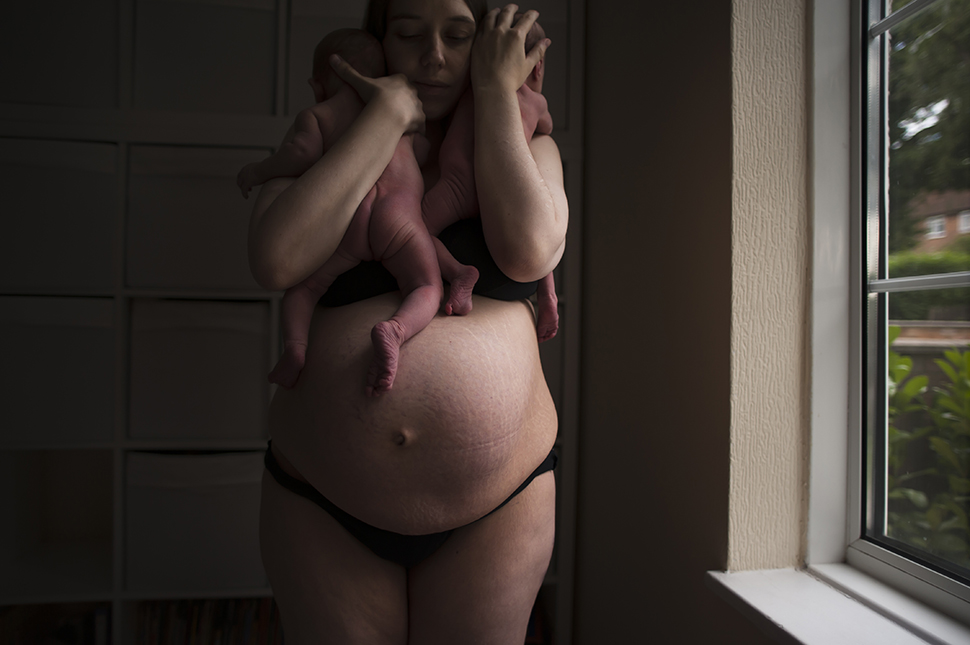 One week after the birth: 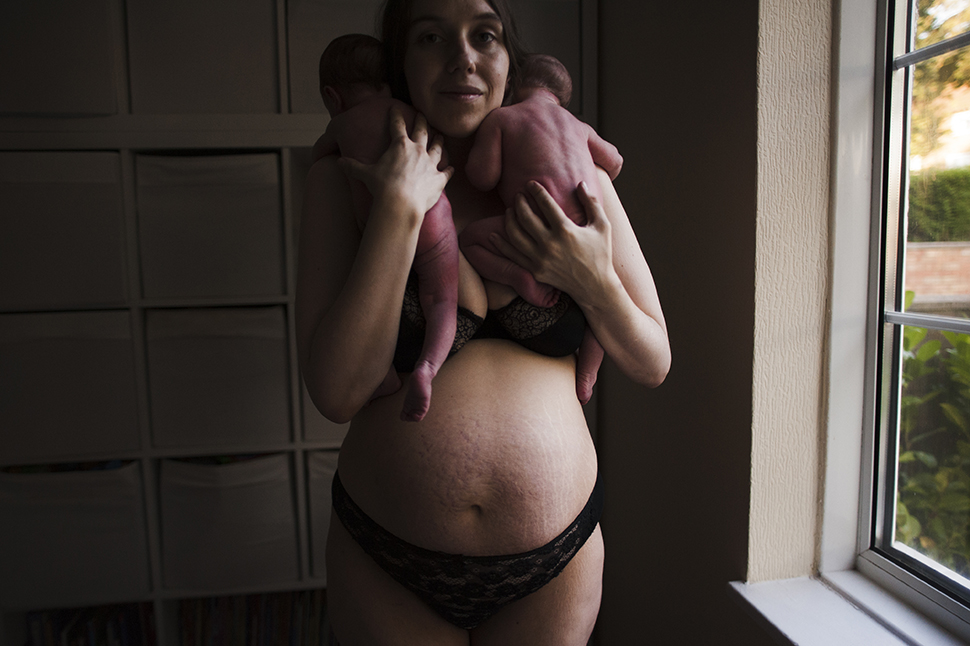 My next update will be their one-month anniversary of being born. Then I think I’ll take quarterly photographs until their first birthday.

This isn’t the body that I thought I would have as an adult.  The realisation that I’m never going to be tall and willowy, that I’m always going to share certain similarities with a hobbit, still sometimes takes me by surprise.  But my goodness, it’s mine.  Every day it does its job, mostly easily and uncomplainingly.  It gave us our children.  It looks pretty in a dress,

I am happy in this skin even, especially, one week after twins.

How do you feel about your postpartum body?

Decorating a Nursery with Boori

Fabulous video!! You looked so amazing, can’t believe you fit so much baby in your tiny body!!

I’m very envious, as I was never able to get pregnant, and I wanted to very badly. I am enjoying following your blog, and seeing your sweet babies.

I had my first real experiences of body confidence issues after the birth of my children, and it made me very glad I didn’t experience that as a teenager. It’s bad enough now, let alone in those emotionally fraught days where you just want to blend in / keep up with your peers.

Huge congratulations to you and your girls. Motherhood is the most amazing experience and you document it so beautifully in this post and video. xxxx