The Milestones You Miss

It’s funny the little things that get to you as a parent, isn’t it? The things that bring a lump to your throat and shouldn’t bother you but somehow they just do.

One day last week I was in the office, knee-deep in spreadsheets and calendars and everything else that nibbles at my working day until before I know it, suddenly it’s eight o’ clock at night and everybody seems to be heading home. And an email flashed up in the bottom-right side of the screen entitled ‘Please don’t kill me’. It’s an attention-grabbing title, right? So I mentally put down what I was doing and loaded the email.

And there were two pictures of my children, one each, standing against our back door with slightly worried-looking expressions and a new haircut.

I had missed their first hair cut.

But this was a milestone that I could control. I had expected to be there for this, to share in it. In my head I had already planned the photos that I would take, how I would share them, whether we would reward them for sitting still (they didn’t) with something sweet.

Kirsty couldn’t have known that I would mind. For all that I had thought about it I’m not sure that I had ever even mentioned a desire to be there for the first time that scissors meant hair. It was nobody’s fault and there was no point in passing blame but once it was done it was done and we certainly couldn’t stick the hair back on their heads. I just didn’t know how much it would matter until it was too late.

Perhaps I’m just realising more and more as they’re growing bigger that I’m not going to be around for very much of it, and perhaps it is just starting to sting a little more. I love my job and I certainly don’t want to spend less time in the office… I just need more hours in each day and more days in each week to balance things out a little.

Are you sentimental about milestones? What have you missed, and did it matter? 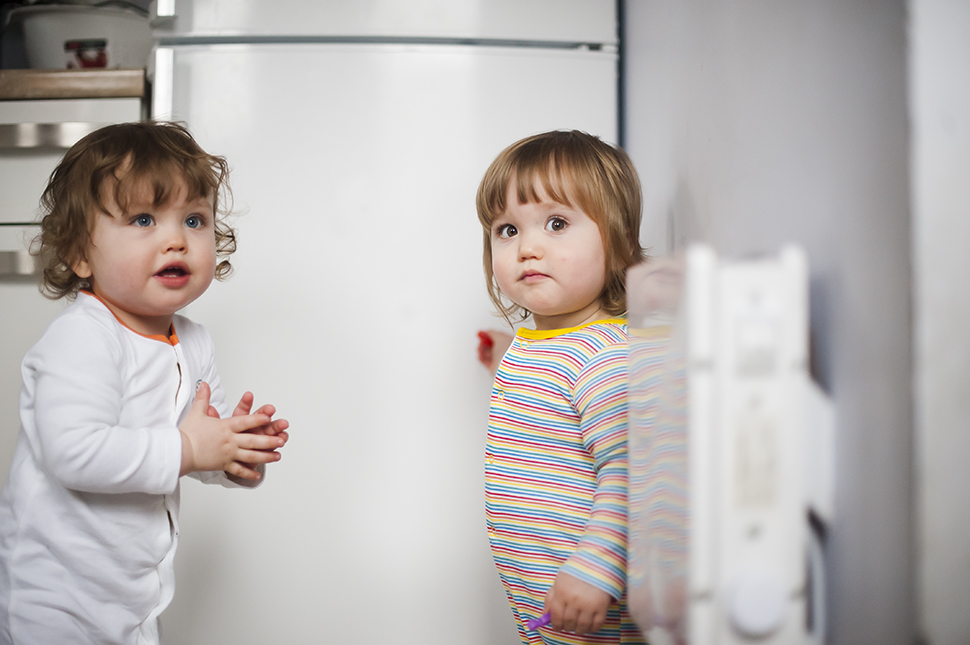 Most importantly, do you like their new fringes? At least they’ve stopped walking into things..!

A Visit with Great-Grandparents

Today You Are Viable

This is really sad. I think my husband feels the same way as he’s back at work now, but I guess it’s life and there’s not much you can do about it. Still, I’m dreading going back to work and having to miss things.

Oh bless you, I can imagine how hard it is. On the plus side they do look very cute with their new fringes. xx

Hello,as a FT working Mum (why don’t we say that about Dads btw) I fully get what you mean by missing things. But I formulated a mantra for myself…I will make my own sets of firsts for my twins. First time they eat new stuff in a restaurant, first time in a hotel room on holidays, first time to say thank you in a foreign language when on said holidays. I just remember that we have cuddles and chats st night and in the morning if possible. We make fun breakfasts at w/ends, we have adventures going to visit friends/family. Be your children’s champion and cheerleader. THAT is what they will remember, not their first haircut 🙂
Be as kind to yourself as you would be to a friend in your situation. It’s not easy, but it’s do -able.

Oh darling, you can’t-none of us can be there for every milestone, you are doing an amazing job-it’s not the quantity but the quality of the time and love you give your kids and they look too GORGEOUS as always x

They look so cute! I think missing any milestone is hard and first hair cut is a big one for me too. You need to come up with something super exciting to do as a first to make up for it now – first twin tandem skydive (or something considerably less risky)

They do look super cute with their new haircuts!
You know what love, even if you’re at home most of the time, you can still miss milestones. Each of my children took their first steps on a day I wasn’t there – I’m there all the bloody time and yet I still missed their first steps. Just revel in the moments that you ARE there. x x x

Missing milestones does sting. I missed many things in the first two years of M’s life that C got to experience, but since she went back to work with both feel like we miss out on things.

It’s hard, you have my sympathy, there is no redoing milestones. But you’re right, more hours in the day would be great.

[…] end of the four days they seemed to have stopped expecting me to leave.  I wrote recently about missing milestones, which is something that I’ve found really hard recently and I think might prove excruciating […]

[…] I wrote about missing milestones as a working parent, after I realised only after my twins’ first hair cut that I had really wanted to be there […]