Now that the girls have passed six months old we are beginning to embark on the task of weaning them from milk on to solid food.  When the boys were small we approached this a bit like a military operation, introducing one food per week or so and meticulously documenting their reactions.  Those of you that have followed the blog for a while will probably recall that our preferred method of weaning the boys involved baby-led weaning, and we used to strip the boys down to their nappies and sit them, facing each other, in a plastic crate to contain the mess.  We thought that we were very clever because it meant that most of the food they threw about was safely contained, and we could carry the whole lot to the bathtub and sluice them down after their meal.

This time, we are practicing what I call toddler-led and dog-supported weaning.  The girls eat whatever they can swipe off of the boys’ plates, else whatever the boys hand to them when we’re not looking, as quickly as they can lest the dog take it off of them!  In fact, Olympia actually learnt to crawl when she spied her brother’s slice of pizza and somehow figured out how to cross the room in order to take it.  She was five months old at the time and we took it straight back off of her, in part because her brother was devastated to lose his coveted treat but also because the World Health Organisation recommends waiting until six months to wean.

The best thing about a second baby, or in my case babies, is how much more relaxed everything feels.  We don’t hover anxiously lest they choke – although we do of course keep half an eye – and we’re not especially fussed as to whether they’re eating ‘enough’; we just hand them big chunks of fruit or veg, or a strip of toast, and let them get on with it.  And they have taken to it like little ducklings to water – or more accurately, like pihranas, destroying anything edible in their path.

The other morning I glanced up from the laptop to see Balthazar perched like a tiny king between an adoring baby Olympia and Josephine-dog, dividing his Pom Bears into thirds.  It is wonderful to observe the girls exploring food as something that they can use to connect to their brothers, and the boys are (mostly) intrigued that they are able to eat the same things as they are. 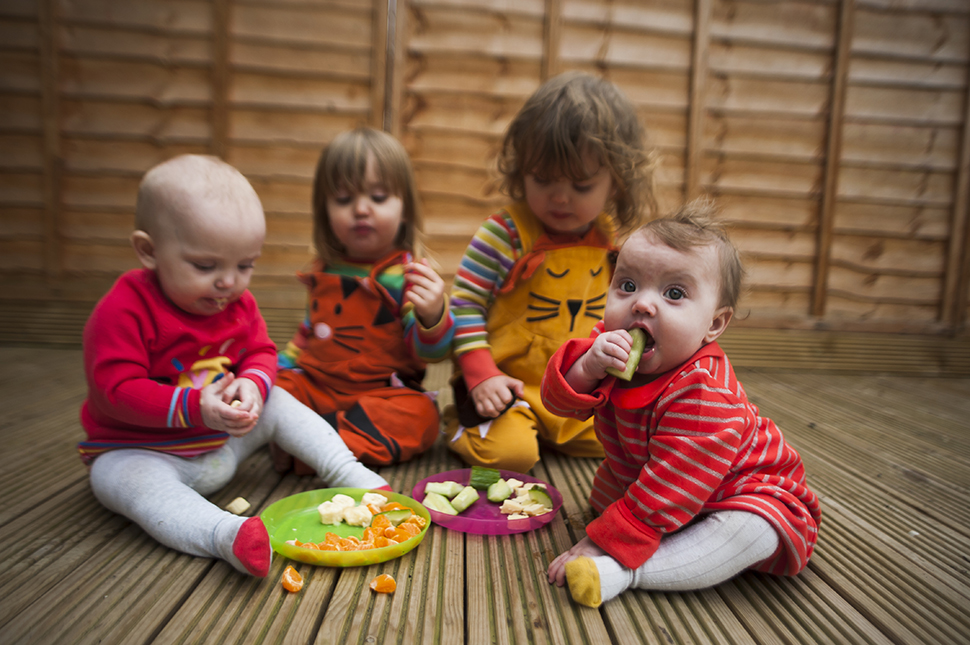 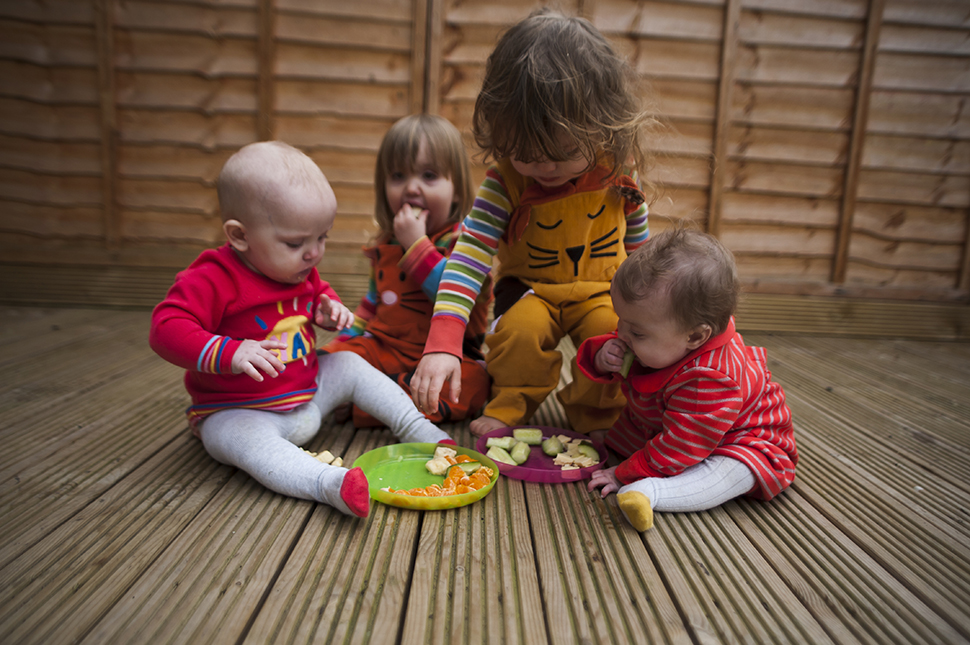 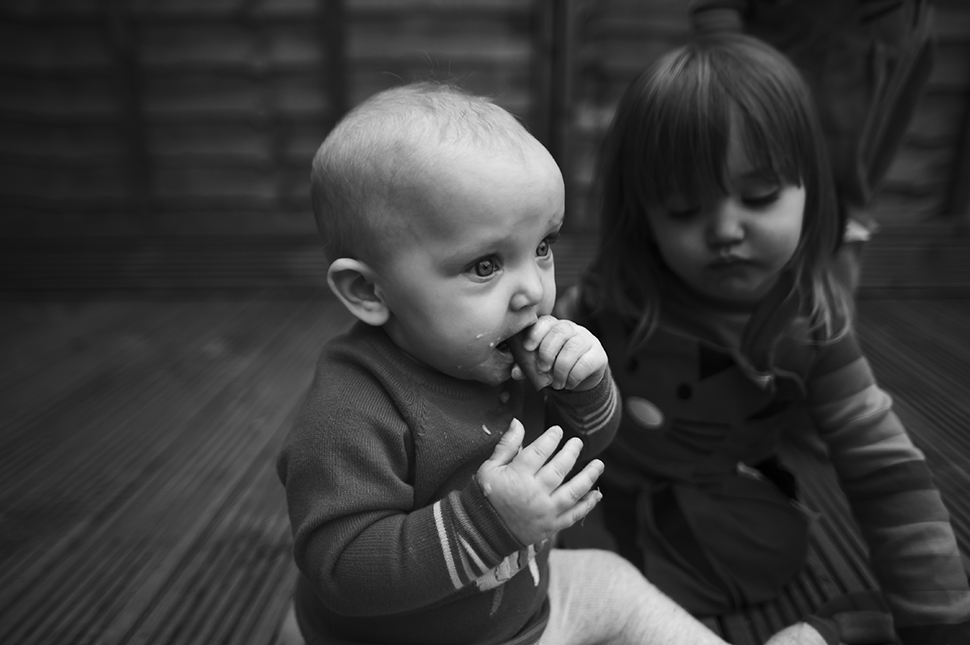 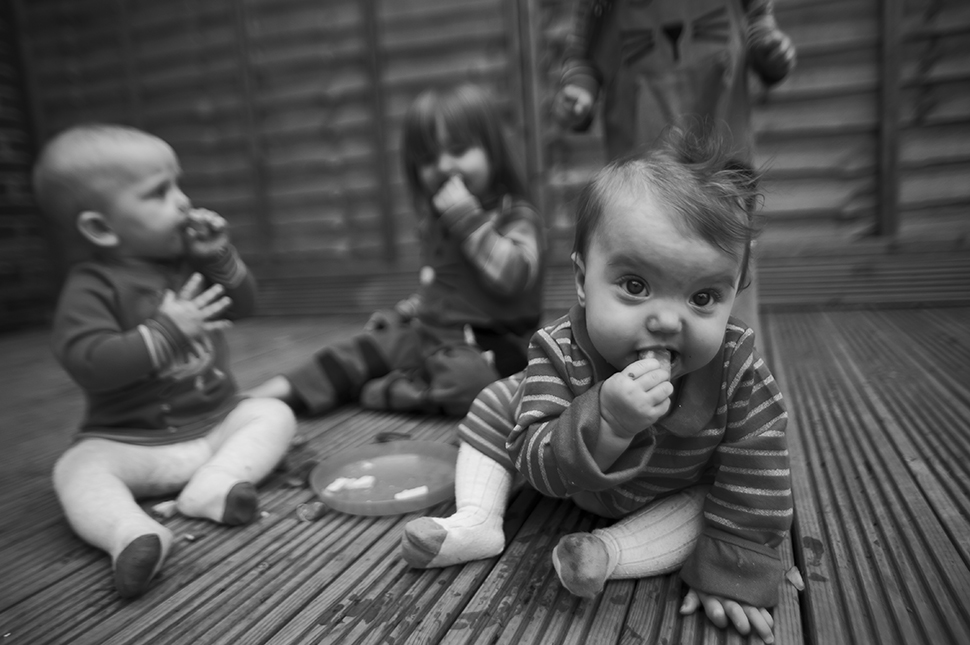 Some of their favourite foods thus far include the following: pesto pasta, avocado, cucumber, roasted root vegetables (I just drizzle them in olive oil and roast them until they’re squishy), kiwi, strawberries and toast.  Like their older brothers, the girls will be raised to be vegetarian, so we don’t plan to introduce meat to their diet at all.  With the exception of a Doggy Dentastix that the boys once stole from the dog – urgh! – the boys have never eaten an animal product in their lives and they are so healthy and happy and bright, so we feel really confident in embracing the same approach with the girls.  Instead, they will get their protein from nuts and beans and legumes, and – until my creeping sense of guilt gets the better of me – from eggs and dairy.

It is all going well so far.  We haven’t had much gagging and only one episode of proper choking where Embla needed some help to clear her airway.  And although it is bittersweet to observe how our babies are growing up, being able to share social eating with them is such an exciting new adventure.

What shall I try them on next?

Working Motherhood with the Medela Freestyle

It sounds like it’s going really well! Bananas and toast were firm favourites when mine were that age, or sweet potatoes!