Last year attending Britmums Live was one of the highlights of my summer. I bought a ticket super early, snagged an excellent sponsor, carefully selected my most sociable baby and spent two days at the conference socialising with some of my favourite people, networking with PRs and learning an awful lot.

This year I wasn’t sure that I would be able to attend at all. Even though my first set of twins were not born early, the average point of gestation for twins at birth is a week earlier than I am right now and at the time of purchasing a ticket I was a little worried that they would be here by now. Not only that, but even if they were still hanging on in there by Britmums Live, it felt a bit risky to traipse in to London for a conference – just in case the excitement started things off! And then my haemoglobin level fell – and kept falling – and there was a whole new layer of things to worry about: would I be able to stand up for long enough to chat to everyone? What would happen if I fainted at the conference – or worse, getting to or from? Did I even have the energy to care about talking to people when I could be tucked up on the sofa, napping?

But I bought a ticket. I thought that I would see how I felt on the day. And it’s not far from my home – I told myself that I could always come home early, that my friends wouldn’t mind if I didn’t stand up to greet them. I had an iron infusion the day before and although I’m sure that it was purely psychological I felt better that morning and was excited as I sat on the train, thinking about all of the people whom I hadn’t seen in months and the sessions that I wanted to attend. Frugi, one of my favourite brands for children’s clothing, had kindly dressed me for the day and I felt pretty if a little pale, and rather proud of my ginormous bump.

Kirstie Pelling opened the day with a poem commissioned specifically for the day, Britmums We Are Live. I first met Kirsty at the MADs last year and she is so lovely and ridiculously clever, so I was looking forward to seeing the results of this new venture of hers. It turned out to be the perfect start to the conference. This year, Britmums Live was condensed into one day, which I was none too happy about when the change was announced but actually it worked out absolutely for the best for me personally as I don’t think that I could do two days right now! It did mean that there were fewer sessions and less time to spend talking to people though and I didn’t much enjoy having to choose between the two. It was such fun to catch up with everybody, to meet the new babies (and to have a sneaky snuggle with Chloe’s three-week-old newborn!).

I had been threatening for weeks to give birth at Britmums Live – imagine the backlinks – and when I saw that Diary Doll had brought along a trampoline for us to test out our pelvic floor muscles it seemed like the perfect opportunity to coax the girls out at the conference, but I had a good bounce and as I had expected, nothing happened! In truth, had I been remotely worried that they would be affected by a quick jump or two on a trampoline of course I wouldn’t have risked it, but my cervix seems to be made of steel and they stayed firmly put! I did get a fab picture with Carol Smilie though (I think she thought I was nuts..).

I enjoyed learning more about Costa Brava and considering how we could work with local PRs in future, and meeting the team behind Johnson’s. The twins have always used Johnson’s shampoo, as did my sister and I when we were small, and I’m a little obsessed with the smell. One of the chaps there mentioned possibly bringing out a Johnson’s candle but actually I’d rather cookies… I want to eat it! That might just be a pregnancy thing though.

As always the keynotes were excellent. Anne-Marie Cockburn broke all of our hearts with her account of her daughter’s life and death, and the aftermath. The Dad Network‘s interview to be a stay-at-home dad to his toddler was adorable and hilarious. Mama’s Haven shared her story of losing her baby to cancer and her grief was so raw that I could barely stand it – but what a privilege to be trusted with such a story and her thoughts. This part of Britmums always goes by in a flash.

And then it was time for the Brilliance in Blogging Awards party, and the award ceremony itself. With all of the excitement and activity of the day I had very almost forgotten that I was a finalist in the Photography category. I felt proud and flattered to have made the final but honestly didn’t expect a win – quite the opposite, actually. My four fellow finalists made rather formidable competition. I sat with my friends and was excited to cheer for them, and – if I’m honest – even looking forward a little to the day ending and going home. I was so tired that I was barely awake.

And then my name was called. And people were clapping, and smiling at me. And somehow I made my way up on the stage and the founders were hugging me and Carol Smilie was taking off my badge for photographs and there were SO many people in the audience – it’s a good thing that I’m so short-sighted! – and I clutched my award and found the words for a short speech. I hope that I said ‘thank you’. I think I did. 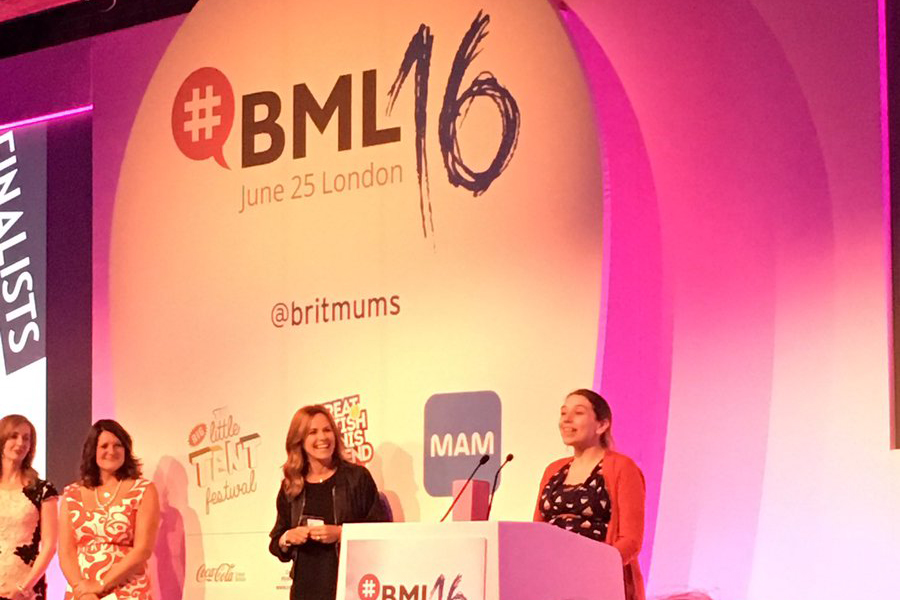 The lovely Mummy and Monkeys snagged a picture for me.  This ‘award-winning photographer’ managed to go the whole day without taking a picture… whoops!

So now my blog is an award-winning blog. It’s still the same blog as it was on Friday. It’s no better than the other, not-award-winning blogs that I read so avidly. The award itself is lovely, all glassy and shiny, and I love knowing that people who aren’t my mum read my blog too and that they voted for me to put me in the final. It means the world that the judges chose me. But I think that my favourite memory is how many people cheered for me and clapped, and how pleased they seemed for me. It still all feels like a dream, but a good one.

A Tiny Dose of Love with Comfort Pure

An Iron Infusion in Pregnancy

Oh Amber. You are the sweetest, funniest and quirkiest person I know. You were so surprised to have won and you sound so grateful that it makes the award even more special. Your blog is just the same as it was on Friday – one we all love to read, love to look at and love to spend time on. Huge congrats again x

You looked amazing Amber and I can’t believe you bounced on the ‘damn trampoline ‘ twice. Very brave

Wow you are having twins twice. That is as spectacular as your blog award. Really enjoyed this post and I hope you and bump are recovering well from BML. If you would like to relive collecting your well deserved award I have recorded and uploaded them to youtube, Here is yours https://www.youtube.com/watch?v=gGT2LMzmGVY xx

I wish I had stayed for the awards now, but I was so bloody knackered by that point! Well done on your thoroughly deserved award, and for, well, just attending britmums in general when in late pregnancy with twins!!

You did indeed look fabulous in your Frugi dress and I’m so pleased you won. Now crack on and have those twins, I want to see more beautiful photos please x