Home Twins Every Day is an Outing
Twins

Every Day is an Outing

When you’re a gay mum, every day is an outing.  I’ve referred to this in the past but now that I’m thinking about it, it feels worthy of a post to itself.

Before I had children my colleagues didn’t even know that I was dating a woman.  When I announced my pregnancy with a picture of the ultrasound and an email announcing that Josephine-dog was going to be a big sister, they thought that I was adopting two puppies.  One of my bosses clearly assumed that it was an accidental pregnancy and almost fell over himself trying to make sure that I was alright with the news that in seven months’ time, my life was going to be taken over by not one but two babies.

I think that they were all rather surprised to be told that yes, I was indeed expecting two human babies and that the pregnancy had been meticulously planned and engineered by IVF.  And why.  So that was one outing.  There was another when we hired my maternity cover and she asked whether my husband was excited.  Another with the lady who waters the office plants every week.  Another with the chap who delivers our post.  In case anybody wasn’t aware by the time that the twins arrived, I circulated a picture of the whole happy family with the email announcement that they were here.  It was a relief when everybody knew.  But then new people joined, and a new series of announcements had to be made.

When it comes to people with whom I interact frequently it makes sense to tell them about my unconventional family dynamic.  It would be weird not to when natural conversation dictates that I refer to my partner and the mother of my children.  And then the ‘outing’ is over with and that person will never need to be told again.  But what should I do with people whom I do see often but not closely?  The lady at the private couriering company that we use for sending tracked mail, for example.  She saw me weekly throughout my pregnancy but it wasn’t until after the twins were born that she asked me whether they looked like me or my husband… and I really didn’t know what to say.  Was it too late for the ‘Oh we used a donor, my partner is female’ conversation?

The thing is, there’s always the potential for awkwardness.  My awkwardness: is this cool?  Are they going to judge?  Will they whip their children away from mine in horror?  Their awkwardness: Should they have known?  Is it ok to be surprised?  What should they say in order to seem accepting of it?

And then near-strangers.  People who see the twins with one of us, and then the other.  Doctors wondering which of us to address, “Who’s mum?”.  The suspicious look the nurse gave me when I brought the twins for one of their vaccinations but she had previously met Kirsty.  Lady, I gave birth to these children.  Don’t look at me all astonished because their mother suddenly has a different face.

People we strike up an idle conversation with on the bus.  Those are the people to whom it might be easiest not to have to explain, to let them think that Lysander inherited his striking blue eyes from his daddy, not his donor.  To let them think that we’re one mum and a doting friend, or two mums meeting up with our singleton babies for a playdate.  But should we?  I don’t know.  It would be easier.

Of course, I understand.  It’s not the norm.  It’s not even a variety of the norm for some people – case in point, until signing up to twitter, mine was the only same-sex family I knew.  In some respects it’s a privilege that ours are the faces that normalise the idea of a gay family for those people.  But sometimes it’s just exhausting.  Sometimes it would be nice not to have to explain.  To be an instantly recognisable family like the mum-and-dad sets pushing their little ones on the swings.  Not to have to justify ourselves.  “They’re my genetic material but Kirsty has legal parental rights.”  For it to be easy.

At least it gives us something to blog about.  And I wasn’t scarred by having divorced parents in an era where it was not the norm, so perhaps there’s hope for the twins. 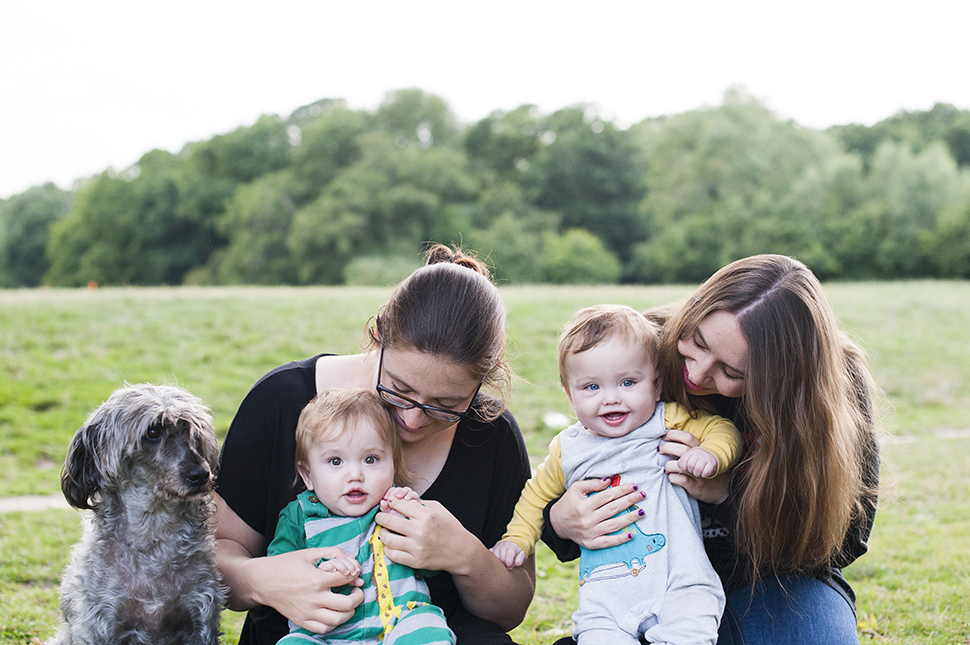 Is your family dynamic easy to explain?  Do you know any alternative families?

10 Things You Didn’t Know About Me Tag

What the Twins Wore For: Their First Ever Festival (Little Green Radicals)

This post really resonated with me – and reminded me of something I wrote over three years ago (http://asummerfullofpeaches.com/2012/01/realisation-we-never-stop-coming-out-gay/). I still struggle with this, especially because as a single femme woman, I pass as straight – but I wonder what will happen if (when) I have children. I try and be as honest as possible – but yeah, I agree – it’s exhausting.

In regards to the twins, after ‘knowing’ you online for quite a few years (aand Kirsty for a few as well) you have more than hope. They’re lucky little boys.

I know a potential alternative family (still working on it) and I’m intending to send them here when I remember.

Personally I’m quite open at work, but it’s quite the gay friendly environment. It’s still ongoing whenever someone joins or I start to work with them more. I hadn’t considered the extra scenarios when you add children to the mix. Good food for thought.

That sounds really exhausting. It’s not something I had considered but you’ve made me rethink the way I approach people. A thought provoking and interesting post.

I’ve grown up in a small town. There was a family like yours with a twist. This child had a father, but lived primarily with his mother and her partner, whorm he called mom too. I do not remember to have payed it a 2. thourght before i was about 12-13 years old. Then it was a eye-opener – hey there are other ways to live, and i remember that their familiy dynamic felt softer, les conflicted than many other families.
Since i have had the plasure of seeing two men, in my lager family, have a baby boy with the help of a close female friend. She gave them the gift that she carried him gave birth to him and gave his fathers their son. It is one of the most emotional and amasing things i have ever seen. She is called Aunt ….. so she is still a big part of his life. It was a doner egg and one dad is his genetic father. In theremes of explaining i think that they gets of more easy than you do. They have, especialy one of them has a quite feminine body langauge. So they are easy’er to “spot”. The boy i 8 now and have only one complaint – that he can’t have a baby sister! 🙂
My own family is different from the norm, but no one but my children and people close to us will ever know – my first child is genetic both mine and my male partners, my next child is only mine and is made with the help of a spermdoner. The explanation is that since we made out first child my partner has developed a kronic and painful artheritis. It is has a big genetic element and he/we don’t want to risk sending this on knowingly.

Oh hun, I can’t begin to imagine how tiring it must be to constantly have to explain or justify yourselves. I guess people are still locked into the idea of a traditional family unit, but times are changing and people need to change with it to make loves easier xx

Hello, I’ve just popped over from the Blogtacular FB group to say Hi. I found your article very interesting. I’m new here, so I would probably assume you were mummy friends meeting up for a playdate if I saw you on a bus. And I would probably be feeling the ‘their awkwardness’ of is it okay to be surprised. But I would wholeheartedly support you and be happy to have met you and your beautiful family. I would suggest you do explain if people outright ask or comment on ‘daddy’ because it’s good to educate society. And it’s awkward for you but the more you are confident to correct people the more the acceptance will spread for every kind of loving family. Of course I can also understand not wanting to have that conversation sometimes.

In regards to how the twins will feel – I’m sure they will also have those awkward moments. But most kids do of some kind or another. For me I was always aware we were poor and I couldn’t afford to do things the other kids did, didn’t get the presents they did for Christmas. It was awkward sometimes. But my parents loved me and I knew that. I loved our family days. As long as you are always there for them, loving and listening to them, they will get through anything.

Anyway, I know you didn’t really ask for my opinion, but I wanted to weigh in! It’s nice to meet you. I shall be back to check out more posts. x

Presumption is the core of our society, people just presume that you are with a man rather than questioning.

Hopefully as our society evolves the twins will grow in a world more accepting and more used to what is not quite yet ‘the norm’ but utterly normal.

(did that make sense?)