Lysander has a Favourite Mum (and it isn’t me)

When I was pregnant with the twins I found myself wondering quite often about whether there was space in their lives for two mummies. I didn’t know any other two-mum families ‘in real life’ or online either until I came across the My Two Mums blog halfway through my pregnancy, so I had no model as to how it could be done. We spent a lot of time chatting together as we tried to define our roles toward these tiny people who weren’t even born, imagining what life might be like with newborns, babies, toddlers and children.

At that time there were two certainties: that our children would be of my genetic material and I would carry the pregnancy, and that Kirsty would give up work and stay at home to raise them. In fact, she gave up work when I was four months pregnant, which struck our neighbours as being VERY odd when 37-weeks-pregnant me was still commuting in to London every day!

They were born and it was awful, and after a horrible first week truth be told I didn’t want much to do with them. I spent most of my time hooked up to an electric breastpump and weeping over Grey’s Anatomy whilst Kirsty rose to the occasion and excelled at mummyhood.

She has always been the stronger mother, the tireless mother. She is the mother who is delighted to see them in the morning, who used to mourn their frequent naps because she didn’t see enough of them. She is supermum, she’s my inspiration and role model.

We have different strengths. Hers is motherhood. Mine is – well, it’s not motherhood. I’ve come to love them deeply, of course, and I adore being a mother, but I wouldn’t be a good stay-at-home one. I’d be a babies-run-feral-whilst-mum-is-on-twitter one. Kirsty loves staying home with the twins and is constantly finding new ways to enrich their days, whereas I am tremendously grateful that I get to do the comparatively easy gestating them bit, which I am quite good at if I say so myself, and then get to hide in the office when the going gets tough! We both feel like we’ve won. 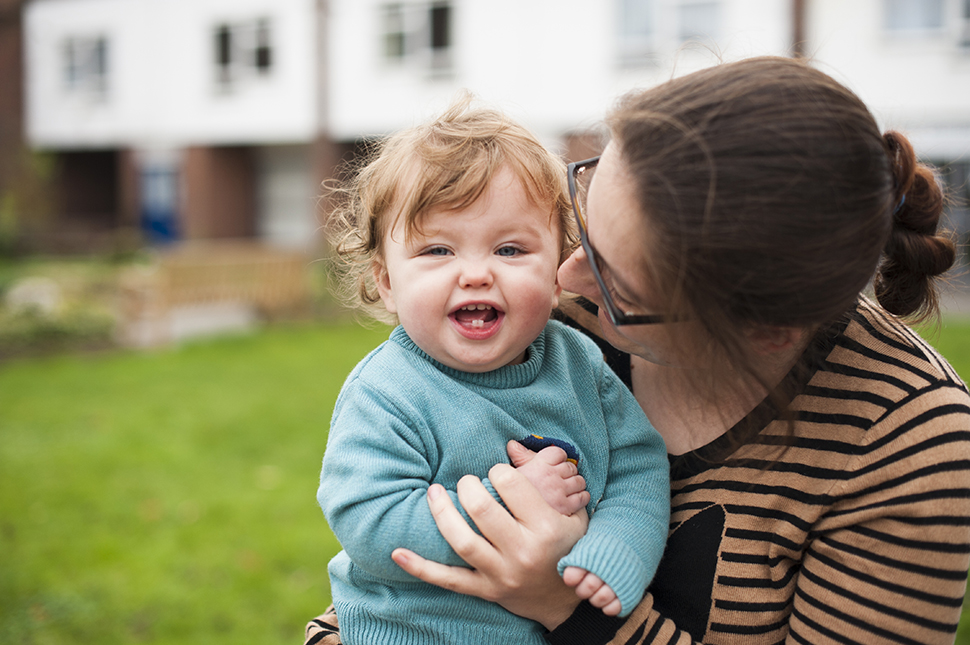 I do feel that the twins are incredibly fortunate to have Kirsty for a mum. And in some ways they are quite lucky to have me too – who else would painstakingly document their days and lovingly craft albums of their babyhoods for them to treasure when they are grown? Who else would teach them what noise a fish makes? (It’s an almost noiseless noise, if you’re wondering, the noise that you make when you open and close your mouth vigorously. My children had mastered it by their first birthday.) Who else would seek out boxes of just the right size to squash them into and take them to visit Grandy in their box, so that they could poke their little heads out and make her jump?

We have different relationships with them. Kirsty’s is nurturing, mothering. Mine is – well, it’s not. And I thought that it would be.

Recently Lysander has begun to express a strong preference for one of his mothers. Needless to say, it isn’t me.

It’s actually very sweet. I love to watch how much he loves her, how every time she walks past he stretches out his arms to her, confident that she will scoop him up and cuddle him. How we would spend all day long on her lap if he could, and then tuck up in her arms to sleep. It makes me feel so proud of her for being that mum, and so full of love for him. But it’s not what I had imagined for myself.

Balthazar, bless him, is still just as happy to come to me. I did lay down with him last night at around bedtime and as I snuggled him in the crook of my arm I said “Night-night Nenky, it sleepy-time. See you in the morning”. Like Lysander he’s not very used to me putting him to bed as I’m usually cooking dinner at bed-time, but where Lysander would have found it upsetting Balthazar’s face just cracked into an enormous grin and he looked at me out of the corner of his eyes like he was expecting a punchline to come any second. He still finds me the funniest person in the room and even though he too expects most of the ‘mothering’ to come from Kirsty, comes to me frequently to show me his toys, pull my plait (he likes me to tickle him with it) or simply to say ‘Ahhhh!’ and launch himself at me with his teeth bared for a rather wet and dribbly kiss.

Like all phases, I expect that this one will pass. Soon Lysander, my blue-eyed little plumpkin, will start asking for me to pick him up again and not so that he can more easily launch himself into Kirsty’s arms. Soon, probably, my sweet little Nenky will start to cry when I pluck him from Kirsty. It will pass.

I hope that it passes swiftly. I miss cuddles with my baby.

A Mini Art Gallery with Photobox

What the Twins Wore For: A Quiet Afternoon (Cololo)

You focus a lot on your blog about how much of a better traditional mother Kirsty is. For a long time it seemed like you had something to prove, that although they are not hers biologically that she was still at least as good a mother? I’m not sure exactly. I have never seen a father compare himself to a mother in this way you compare yourself and your parenting to Kirsty’s. I think you’re overthinking it. You are different people, you will naturally fulfill different roles for you children at different points of their lives.

I’m wondering how Kirsty sees you, and how she sees herself as a mother. You’re really putting yourself down and I bet you do an awesome job in Kirsty’s eyes!!

I think it’s quite natural for a child to favour a parent at some point in their baby/toddler stage and then as they get older. Z has never really favoured Husband or I but Miss C was glued to me for the first two years of her life and then she moved on to Daddy because I was out working and now she’s back to me again. I’m sure Lysander will be back for cuddles with you again soon. It’s funny how they go through these phases.

You have a way with words that makes me so emotional Amber and you are so honest. They do go through these phases, but both my girls are Daddy’s girls. I am hoping this next boy will be a Mummy’s boy. 😉 There are times when only Mummy will do though! x

Aww beautiful this is so normal as the working parent. I see swings and roundabouts constantly in our home. Judah didn’t even know who I was (other than where he came for food, my boobs may as well have been a tap) when I was really sick pregnant with Eden. Then I was home all the time and they preferred me to Daddy, then we had the au pair and I think they thought she was Mum on the weeks I would hide away in my room as I was struggling to cope. Sometimes I think they think Nana is the Mum and at the moment because I’m signed off work they see me more again. You are both raising them, and you are both Mothers, purely because you are both female and you are both raising them. It just takes different forms at different times. I used to feel sad that they saw James as the fun one, and it seems that you have that role down. It’s just Lysander is a bit more sensitive. He will become more boystrous at some point and then will be jealous of Balthazar and soon have you throwing him around and making him giggle. The main thing, and this is what I try and reassure myself, because if I overthought it I’d get too sad, is that they are both happy little boys, they are well loved, looked after, cared for, all of their needs are met by either one of you at the time that it is needed and they are very secure. You do amazingly and there is DEFINITELY room for two Mums in their lives. If they didn’t see you for a while they would certainly be craving you again. Love you lots xxx (thank you for the mention too xxx)

Children are so fickle, Dylan is ruled completely by his stomach, so whoever is more likely to feed him is definitely the favourite parent. In all honesty, I think Dylan is a Grandma’s boy and Archie is all about Grandpa – Not sure what that says about our parenting! I hope little Lysander starts asking for your cuddles again soon x

This post really resonates with me Amber. Obviously Toby has one mother and one father, but he’s always been closer to Phil and only lately has he started showing any signs of actually liking me above other people. It hurt me for a long time that the son I wished for, carried birthed, breastfed and nurtured was rejecting me but I know it’s not like he actually disliked me!
I always imagined I’d be this complete earth mother but I’m not, I can’t be because Toby doesn’t respond well to that and I guess my point is that two mums, two dads, one or the other or one of each, all we can do is play the part our children need of us.
I bet Kirsty sees so many mothering strengths in you that she feels she lacks, I’ll put money on you both being exactly the mums your gorgeous boys need xx

Kirsty sounds like an amazing mother and I can totally understand why she is your role model. However, you are an equally fabulous mother. I know the boys have two mums, but that doesn’t mean that they have two parents that are the same – they have two parents, which is wonderful. You have to be you and Kirsty has to be Kirsty and the boys do, and always will, love you both for who you are individually. I would LOVE to read what Kirsty has to say about you as a mum. It would be AMAZING if she would write a guest post on your blog about you as a mother to the twins. I think it would be really therapeutic for both of you and I for one would love to read all the amazing mothering qualities you have got.xx

Kirsty is my hero but you are my champion. Different, not less, two sides of the same beautiful coin.