When Kirsty was small she had an imaginary twin called Katie. Katie came to school with Kirsty every day and they played together in the playground. She has always felt linked to twins in some way and when she imagined her future as a little girl, saw herself as a mother to twins – although the twins in her imagination were often a boy and a girl. When I was reeling at the image of two tiny, flickering heartbeats on the ultrasound screen, Kirsty wasn’t surprised at all. She just thought ‘Of course’.

If I’m honest, it’s always seemed a little like it was meant to be. Oh, a twin pregnancy is more stressful and a twin birth is more fraught with the potential for complications and let’s not even dwell on the logistics of caring for two newborns. It’s exhausting. But it felt right.

I don’t know for sure that the twins love each other yet. For a long time they didn’t acknowledge each other. They never slept better for being laid down together and their first smiles were certainly not at each other. For a while Balthazar’s favourite game was to chase Lysander around the house, patting his head, and I’ve never heard howls quite like it. Often, one of them will be sporting a bite mark from the other. They’re in a nippy phase right now.

But I know this: most mornings, we wake to the sound of them peering at each other over the bars of their cots, playing and laughing. When I think of their future, it doesn’t feel like a lonely one. They will always have a brother to fight their corner, a sibling who remembers their childhood from the beginning. A playmate at school, somebody to walk home with.

We’ve loved having twins. The good, the bad. None of the tricky moments have ever been awful enough to make us regret the moment that we looked at the photo of our two embryos and thought, “It’s worth a chance.”

Twins are what we know. And we’re not bad at them. And let me tell you that the last year and a half has been a blast. 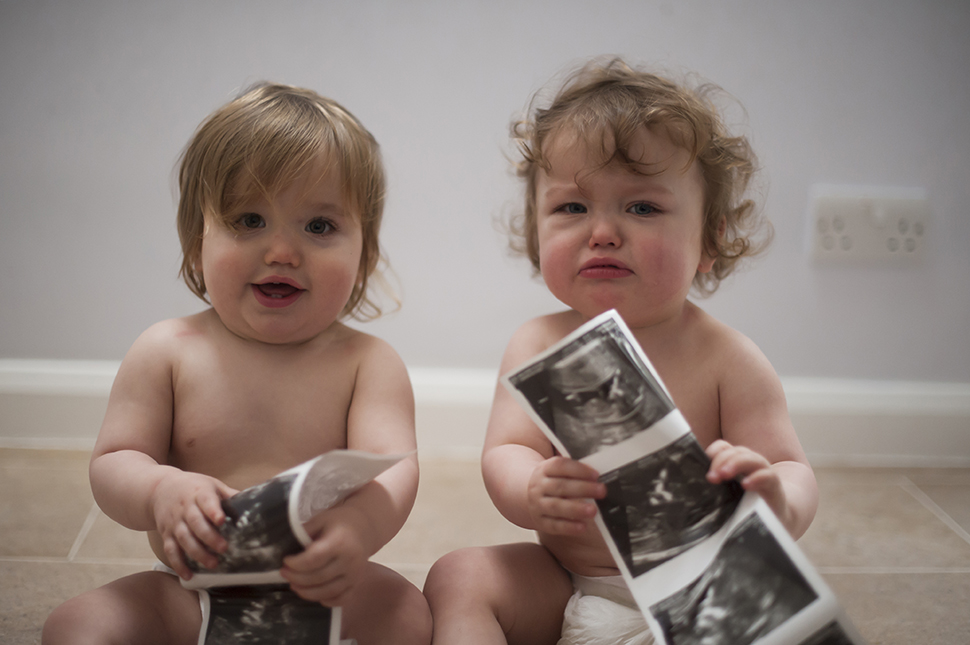 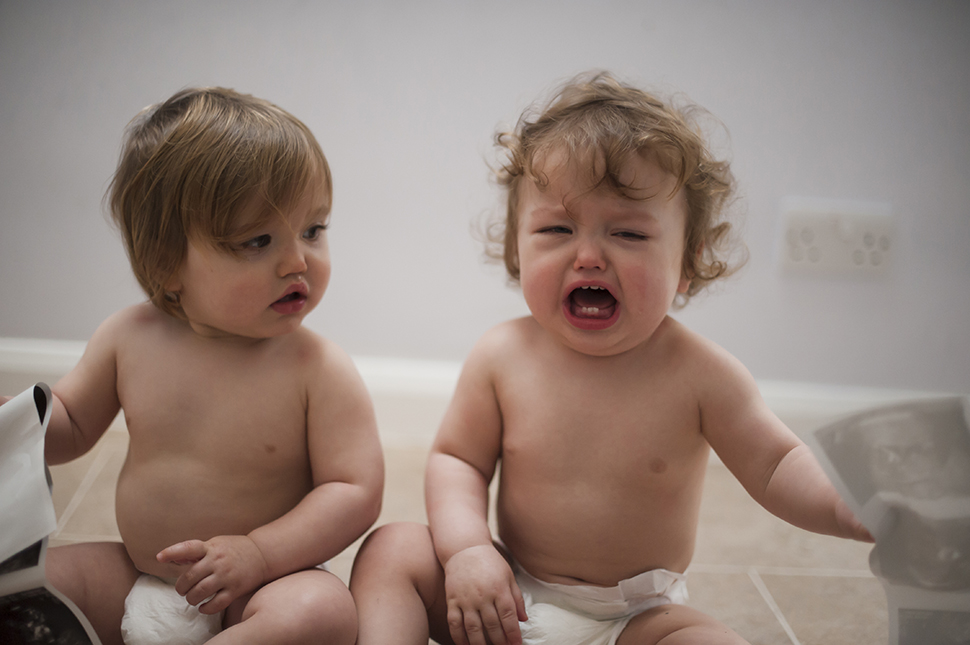 We’ve only flipping well gone and done it again. 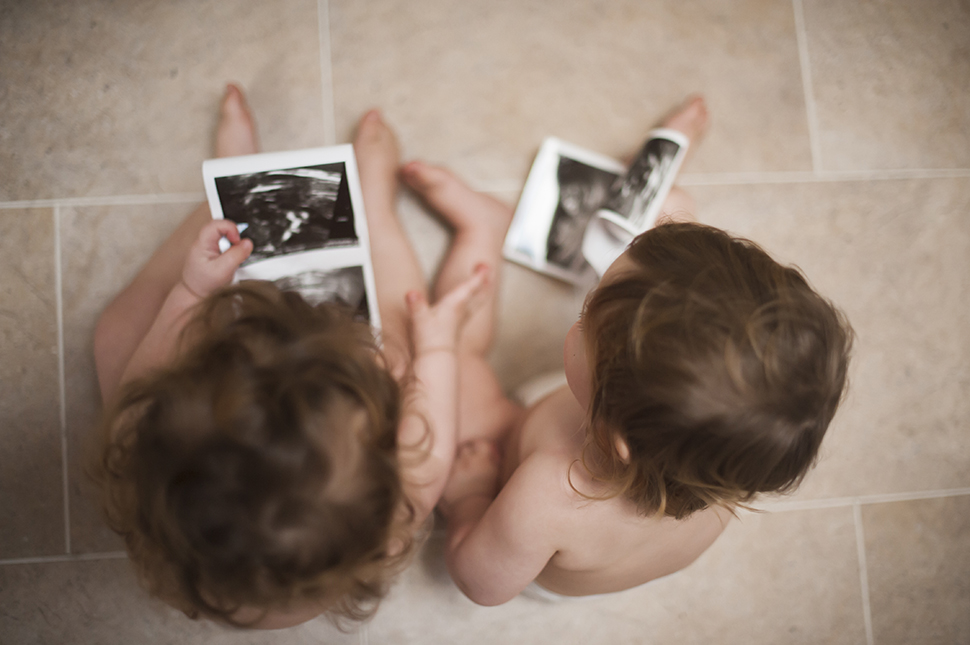 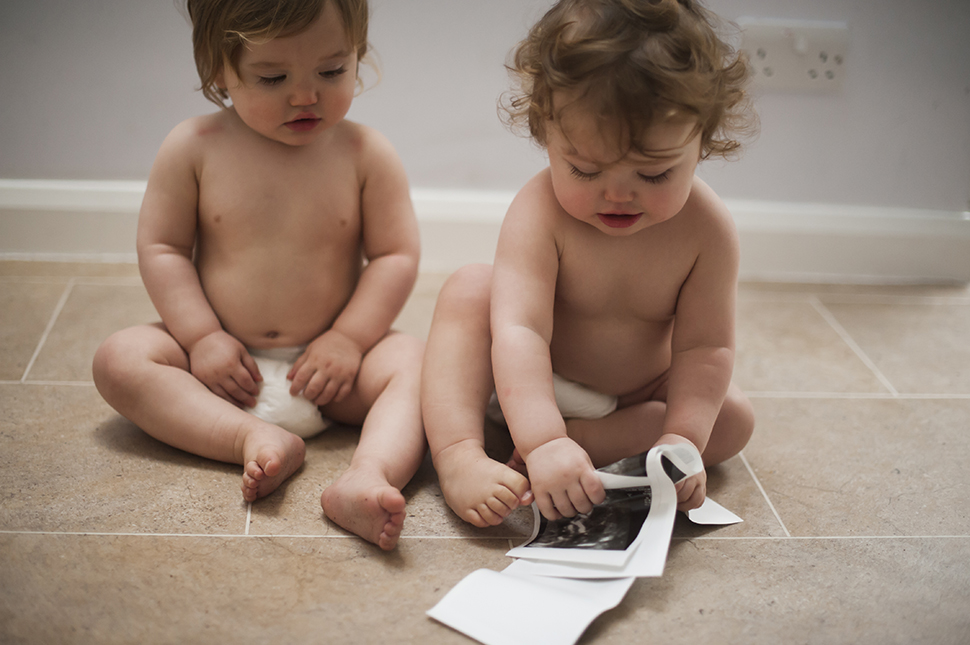 Twins-take-two, the summer twins, will be joining this family in July 16.

Four under two, we can’t wait to share this crazy ride with you.

This is my first entry for The Siblings Project, which I co-host every month with Lucy from Dear Beautiful, Katie from Mummy Daddy Me, Keri-Anne from Gingerlilly Tea, Carie from Space for the Butterflies and Annie from Fable & Folk.  We’d love to have you link up below with your own monthly sibling update and also do check out the new instagram page.

A Letter to Josephine Dog

What They Wore For: Announcing The News (Little Nutkins)

brilliant news!! I did think you’d been a bit quiet of late…. 😉 congrats to you all xx

Congratulations ladies! Gosh what lucky children to have mummies like you. Wishing you all the best and I’m so excited to read along again!

CONGRATULATIONS – 2 under 2 was manic, mysterious, marvallous and MAGICAL. You will never be so tired but so wide awake at the same time.

Ooh such massive congratulations!! Such lovely, lovely news and you are going to have so much fun with two sets of twins. I had an imaginary twin friend when I was young too, she was called Hazel 🙂 sometimes I think these things are meant to be. You two seem to be the most natural twin parents, I’m so pleased you are growing your family xx

Awwwww, this is so amazing. Does that make them double trouble squared? Or something like that? Hehehe. How exciting and amazing and crazy all at once. I have quite a few friends with twins and they all say that they wouldn’t mind another set because they know how to “do” twins and that a second set would be easier for them than for parents who had had singletons before. Can’t wait to watch your sibling journey this year. x

Oh my days off just gasped with excitement when I realised what your pictures were showing. I’m SO thrilled for you both! Huge congratulations!

My word! You crazy, beautiful people! I can’t wait to see how your siblings double in quantity and cuddles! Congratulations!

Oh wow that is so exciting! Congratulations! I think the boys will make excellent big brothers.

Oh my! A hundred times congratulations you guys! This is amazing news. Can’t wait to follow as your family grows again!

Wow, what wonderful news! Huge congratulations, what exciting time lie ahead of you 🙂 mama to four, can’t believe it 🙂

OMG that’s both crazy and awesome at the same time.

Huge congratulations. What a fantastic adventure

Oh my goodness!!! Congratulations!!! I am so excited for you both. No wonder you’ve had such a crazy time, new job and being pregnant. Super excited. Cannot believe it. You’re going to have your hands full when they’re all toddlers…. it’s a good job between you you’ve got it covered. So happy for you, so so excited eek!! Can you tell? I’m flippin’ ecstatic xx

Congratulations!! You guys will do an epic job of parenting 4 under 2, I can just feel it.

Wow! Absolutely wonderful news – what an amazing start to the new year! You must be over the moon xxxx

Wow congratulations. You sure are going to have your hands and hearts full this year X

Oh. My. Goodness. I am in shock but so happy and pleased! FOUR BABIES! FOUR! I am only on number two and I had my first in 2012. You rock!

Which of you is carrying this time around? Can I ask that? I hope that’s okay! I’m really excited to be pregnant at the same time of you. It’s lovely when others join you on the journey.

Massive congratulations. I’m so pleased for you, what an adventure it will be at your house. My girls are now 8 and they grow to love each other more each day. There is nothing like the twin relationship. Mich x

Huge congrats. This is such lovely news to hear on a Friday. What a fun adventure.

I am so thrilled for you. What an exciting start to the year!!

Oh my goodness! SQUEAL! Sending love and hugs and congratulations to you all xxxxxx

Oh my gosh, hugest congratulations! I’ve been a reader for so long and never comment – just had to send you some happy vibes! What lucky little twin wishes, to have you guys as parents and the two boys for older brothers. Hope everything goes swimmingly, from start to finish xx

I wanted to say congrats on here too! SO excited for you both!!

Oh how lovely! Congratulations!! What an exiting year you’re all going to have. And what gorgeous photos as well 🙂 xx

Oh my goodness! Congratulations!!!! I am so thrilled for you all! What wonderful news. 😀

This is such a sweet announcement! I love it! The boys are going to be such great big brothers. Roll on summer 16 : )

Congratulations! That will be so lovely to have two sets of twins, such a special bond for each of them! It will be crazy with 4 under 2, but so worth it! 🙂 xx

This is the most lovely of lovely news. I cannot wait to watch your little family grow into a big family! Just amazing. CONGRATULATIONS lovely. x

Oh you got your wish!! I am so so happy for you. Eeeeeeeee how exciting!! x

Congratulations! I can’t wait to see your journey with your second blessing of twins

oh my god another set of twins!!! what astounding news! i’m so excited for you both and wish you the best of luck and all my love <3 congratulations girls!

Congratulations to you both , what wonderful news and how magical two lots of twins. What a lovely way to share your happy news xx

Aaah Amber — I’m SO JEALOUS!!!! As I said to you before, if I’d have found out we were expecting another set of twins — even when the boys were just 6 weeks old — I’d have been thrilled!! I totally and utterly get what you mean — we ‘know’ twins and my boy and I are bloody good at it too. The last (nearly) 3 years have been so much fun! I would LOVE another set. How awesome — SO chuffed for you both. What lovely news!! Congratulations!! 🙂

AMBER! I cried reading this earlier lol and just look at those faces! priceless! CONGRATULATIONS! X

I am also due in July, but this time I’m only having one! 🙂 xx

Congratulations xx this is the best news

Huge congratulations, how exciting. I love the pictures!
After spending thousands on IVF for it not to work I know what a terrifying gamble it can be but when it works, such a miracle. Luckily we did manage to conceive a natural little miracle and are delighted to be expecting our second in June. It’s going to be a busy summer for lots of us I think! xx

Oh my golly goodness! I am so unbelievably excited for you both; for you all! What a wild crazy beautiful ride. Congratulations!!

It’s going to be an exhausting, wonderful adventure. I’m thrilled for you all. I may also be crying like a big sap. Big love x

Incredible news darling, I remember you saying when we had that day in the park, your dream would be another set of twins. Gorgeous, gorgeous news, much love and hope to see you again soon x

Oh wow!! What amazing news, a huge congratulations to you both! I would love to have twins, especially for my last as I want 4 babies but don’t want to go through pregnancy and birth two more times! xx

Oh wow! I was playing catch up on Bloglovin and this really wasn’t what I was expecting to see! Huge congrats lovely! Excited to hear more about the pregnancy and to see your gorgeous family grow x

This is such exciting news for you all! I’d be excited but flippin’ terrified if it were me. But like you say, twins is what you know and you’ve done a wonderful job so far! I can’t wait to follow your pregnancy, how amazing. Congratulations xx

I know I said it on your Facebook page before, but this is such brilliant news! A fantastic start to 2016, and I can’t wait to see your siblings photos at the end of the year! x #siblings

Oh wow, how fantastic. Super news and really exciting. I would have loved twins but will have to live vicariously through your blog! Beautiful children x

Your boys are adorable! Congratulations on the news! X

Frickin Nora! I knew, but you still managed to surprise me when I read that post! 4 under 2?! Oh sweet Lord. Mad but wonderful, congratulations!

[…] shared previously on the blog how I found out that I was pregnant following our second round of IVF at the equivalent of ten days past ovulation. To be honest even […]

[…] month, Balthazar and Lysander announced my pregnancy with their little brothers or sisters. We hadn’t told anybody except for our mums and it was […]

That’s such amazing news congratulations to you all!!

Congratulations! We’re expecting our first in August! Just the one though.

[…] out that we were expecting two new tiny additions to our family has been such a joy, I didn’t expect it to matter what ‘flavour’ […]