I have only ever worn the twins in woven wraps since they were born, but when the lovely Carissa of Koala Slings asked us if we would be interested in trying out the TwinGo to review, I jumped at the chance to try something new. After using it for a few weeks, I’ve decided that every twin parent (or parent of two children of different ages) needs one.

Once it arrived I unpackaged it all, had a read of the instructions, and then I had both boys in it in just under five minutes. I have a love-hate relationship with using a woven wrap for a back carry, largely because I’m still not very good at it and it can take me forever to actually get one of the boys safely up there, so to be able to just pop a baby up on my back in 30 seconds without any of the fuss and fight was amazing. It was very easy to do, there was nothing fiddly or complicated about it. I used it when I took the boys to be weighed last, and all of the health visitors were amazed at how quickly I was able to get the boys down and back up again.

The TwinGo is surprisingly comfortable to wear for long periods. The boys weigh around 22lbs each, and I was able to wear them both for two and a half hours as we journeyed on trains across London to visit my mum, and then again for a few hours on the same day when we went out shopping with her. I had some aching in my shoulders by the end of it but it was gone by the next morning. Our train ride was lovely and easy, and I was able to feed both boys and put them to sleep on the underground, which is not a feat to be laughed at. My only difficulty there was that I struggled to get the sleep hood on for Lysander, who was on the back. I did manage, though it wasn’t easy, but on the whole we had a really relaxed and pleasant journey.

We used the TwinGo a little bit on each of the days that we had it with us, and one of the things I really appreciated was how huge the pockets are on each carrier. We were able to do so many bag free outings! I could fit a nappy and a bottle and a toy in each pocket, plus a small packet of wipes, my keys, phone, bank cards, a muslin, dog treats, the lead, snacks, some nappy bags and anything else we happened to need at that moment. It’s a brilliant design, with each carrier folding up conveniently IN to that outer pocket, so it’s all compact and tiny. The TwinGo can also become two separate carriers, which is super handy as you can share the babywearing love.

Knowing that you would want to see pictures in action we brought the camera on one of our evening dog walks. 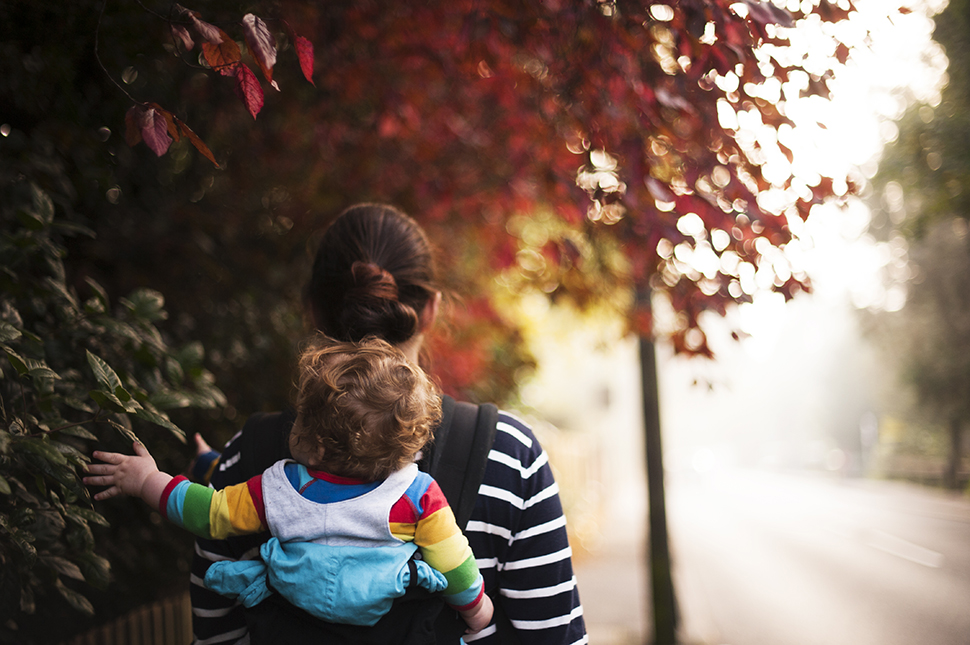 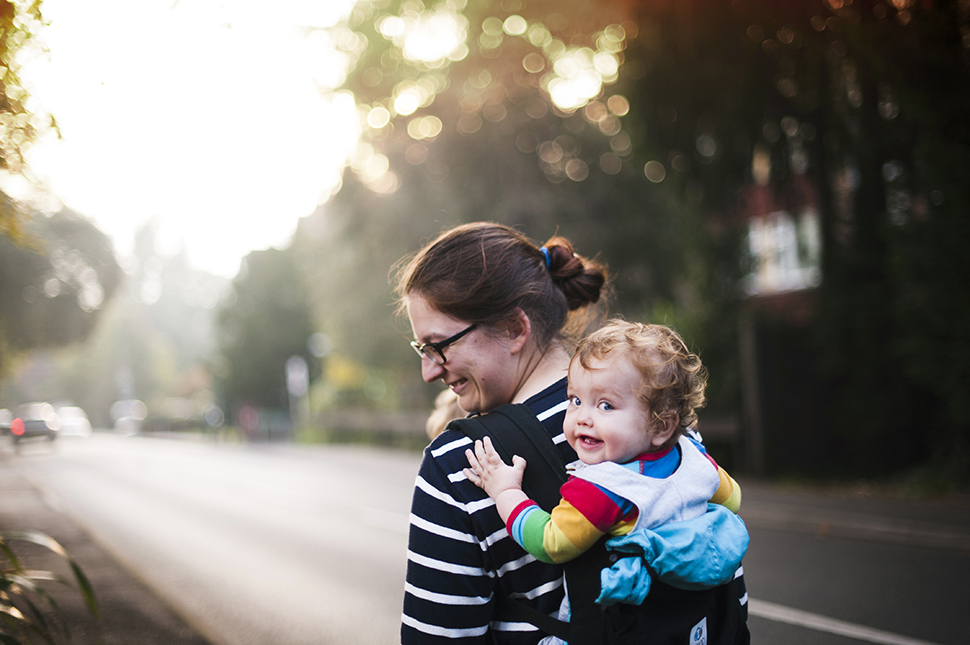 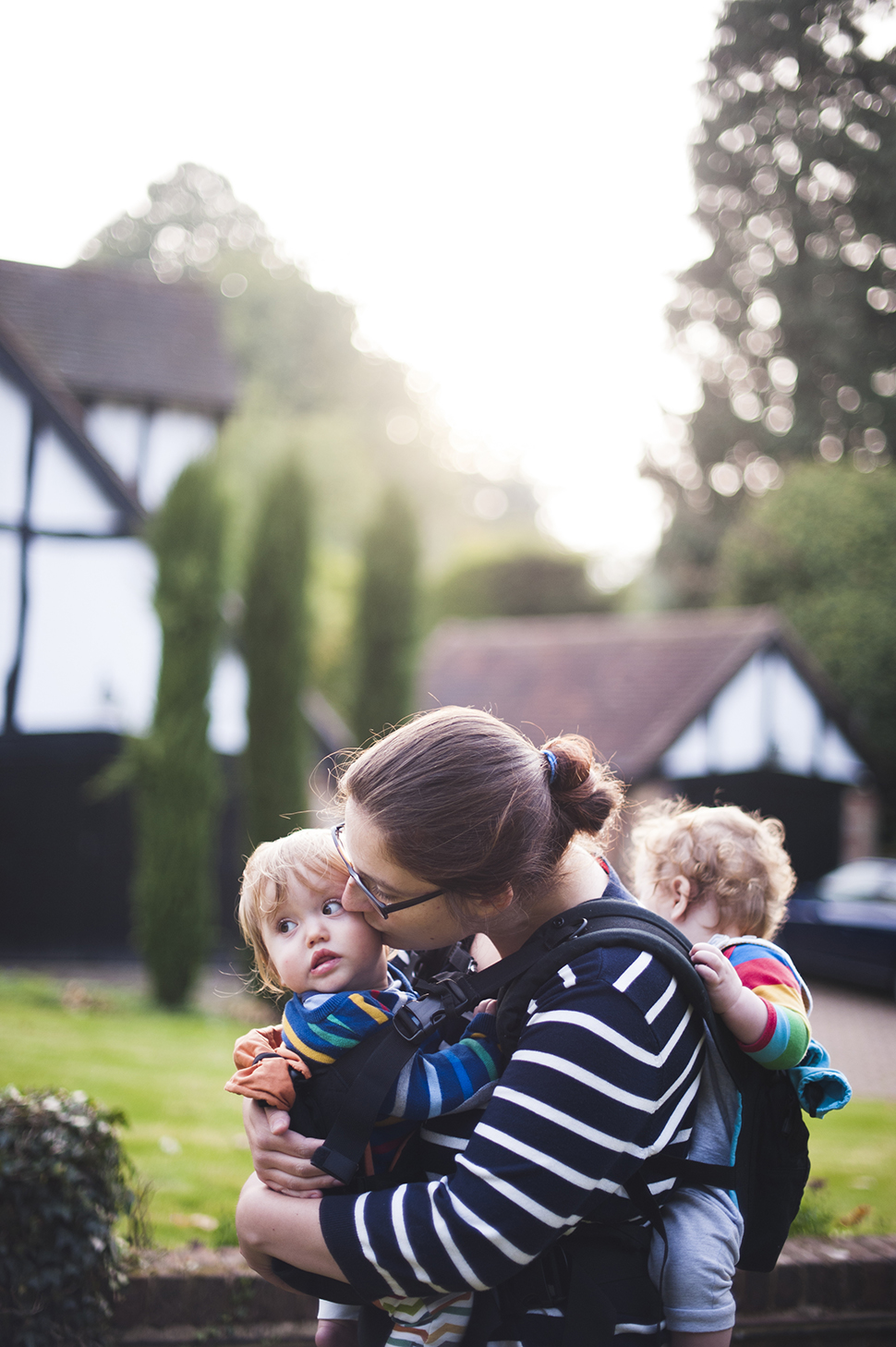 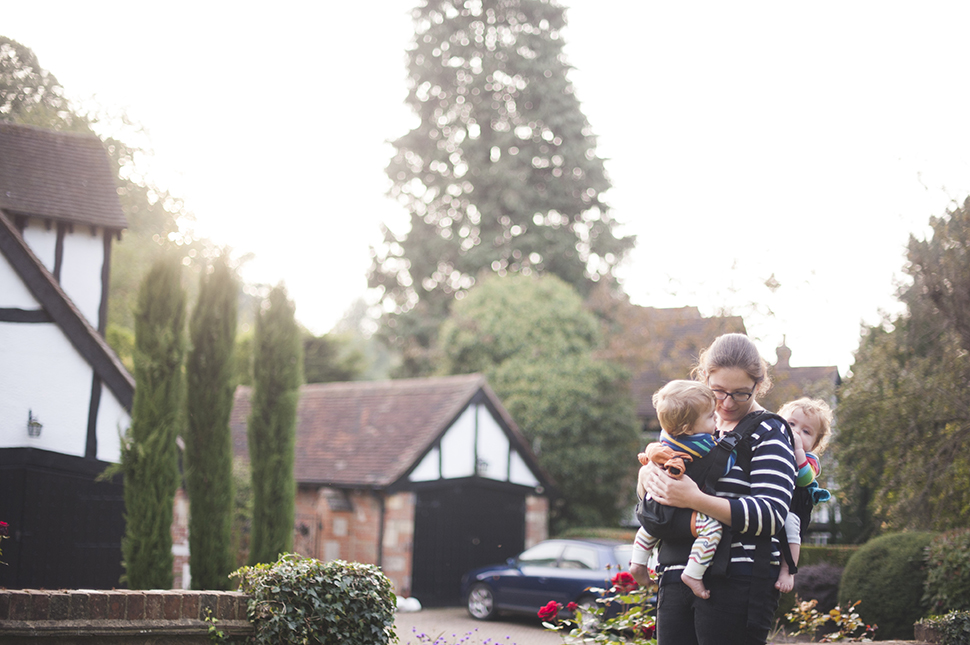 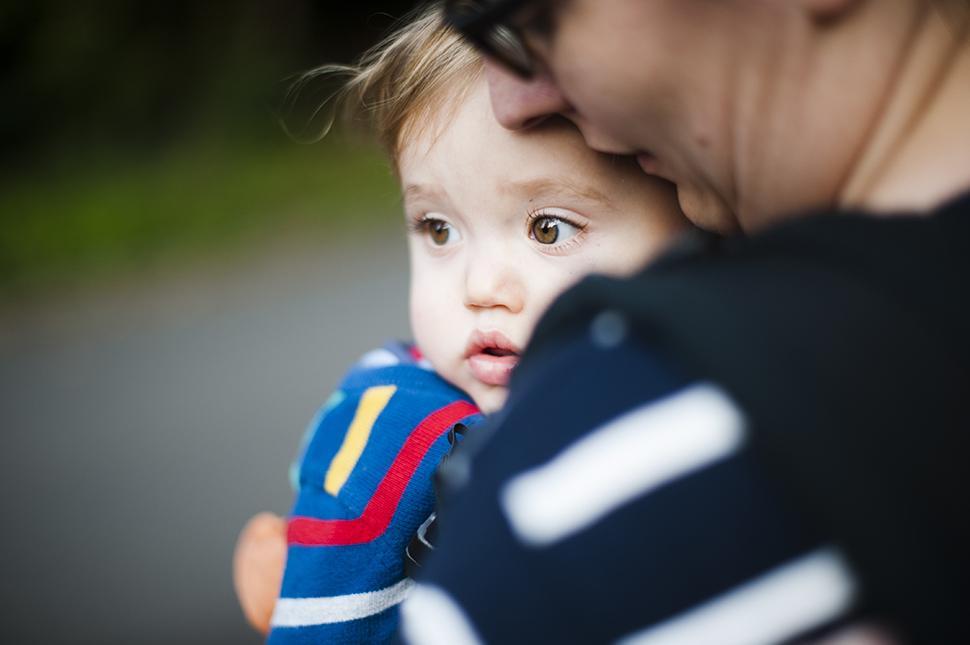 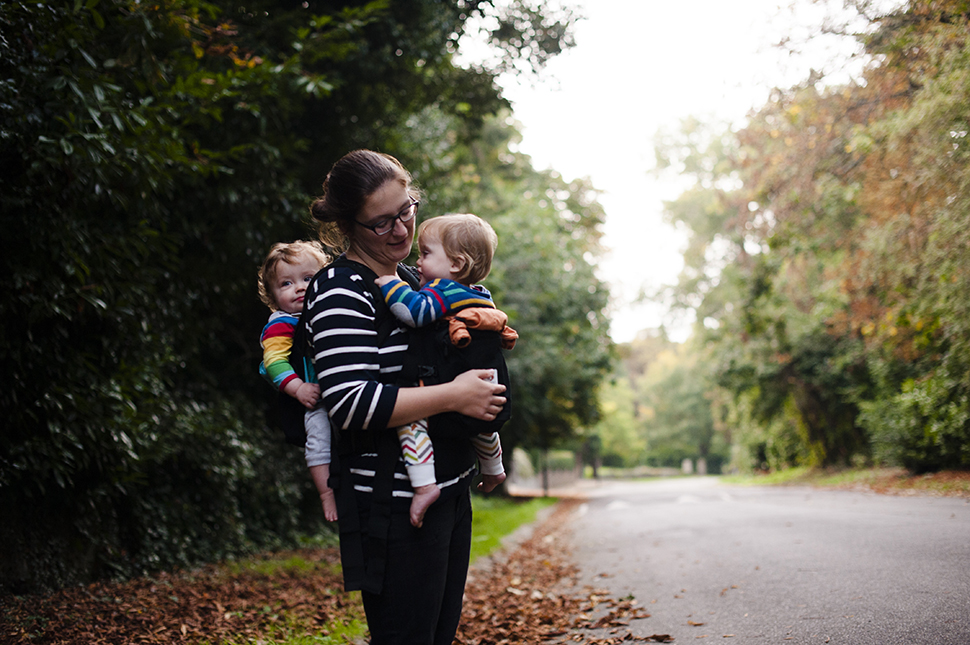 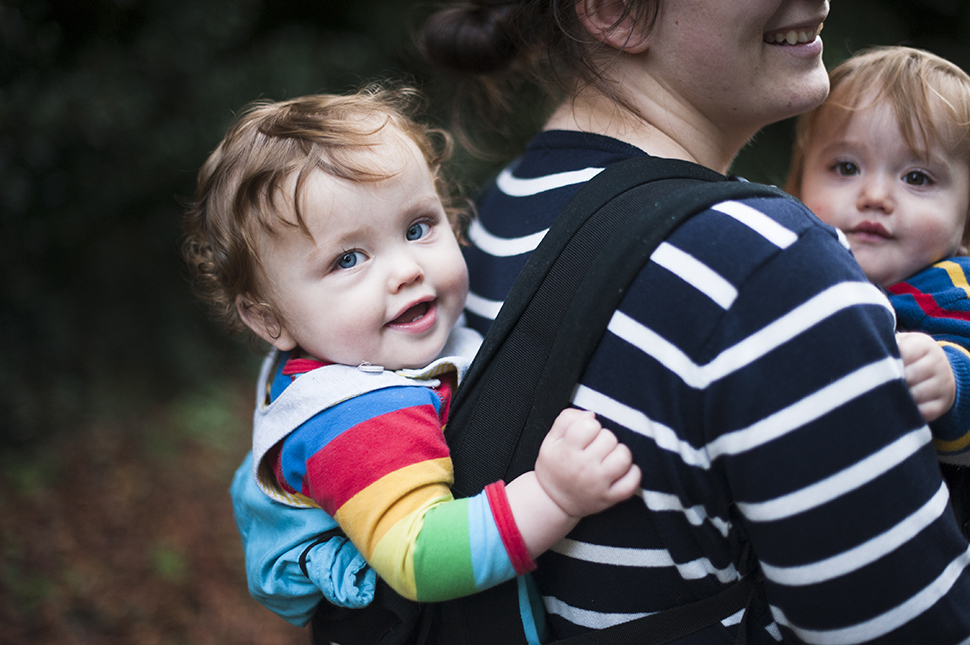 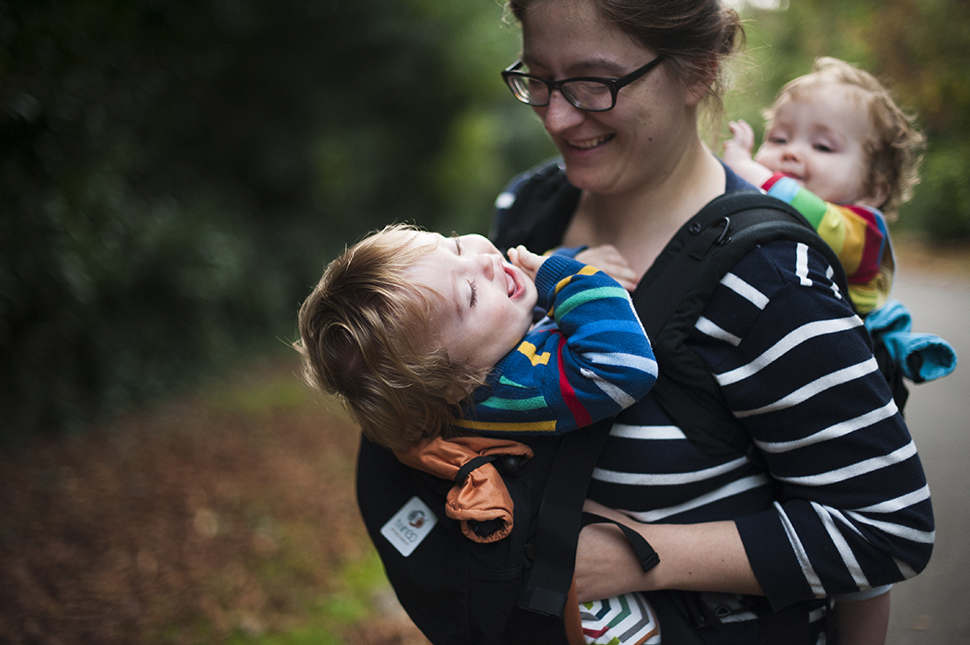 Being a fan of all those beautiful, brightly coloured wraps, I do wish that the TwinGo came with the option of a coloured or patterned panel, but the black design works well as it literally goes with anything.

We will be buying one.  Time to start saving our pennies!

Do you have a TwinGo?  If you have twins and don’t use the TwinGo, how do you currently transport them?

*Disclaimer: We were loaned a TwinGo for a few weeks in exchange for an honest review.

Such a fantastic carrier! We will deffo be babywearing again with our next child and if we have two, I had always wondered how easy it would be to wear both. Now I know it’s simple 🙂

Oh how clever, it looks like a double Ergo! I’ve only ever doubled up by carrying Pip on the front in a soft sling and Elma on the back in the Ergo and that looks a lot easier!

I literally hav no idea how she still does that!! I struggle to baby wear just P3.

This looks like such a great idea and I hope more carrier brands follow suit. The boys looks so comfortable and well balanced x

This looks great, I love the one-in-front-one-behind idea, distributing the weight x

[…] is still babywearing the twins at fourteen months in our fabulous TwinGo. They love so much to be worn and it’s handy to be able to take them through the woods […]