Dogs and babies together are always a worry and as I neared the end of my pregnancy this time last year, nothing made me more anxious than contemplating the wellbeing of my little dog Josephine, my ‘first child’, in light of the imminent changes to our family dynamic and our lives.  Would she adjust well to the change?  Would stress make her a danger to the twins?  As it turned out I needn’t have worried nearly as much as I did.  We’ve had some patches that were rougher than others, of course – she was appalled when the previously immobile babies developed the ability to crawl straight at her – but they’ve always smoothed themselves out and my newly-walking toddlers and my dog get along fabulously. 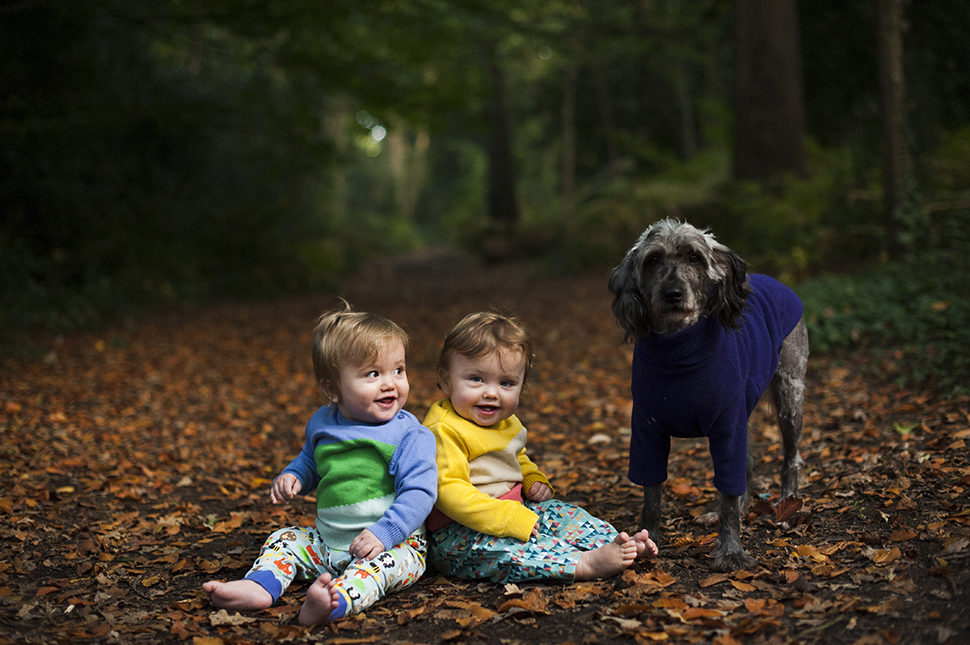 I thought that I would write up how we did it, in case any of our readers are expecting a baby and are facing a similar situation.

Firstly, we remembered that a dog that has her needs met is far less likely to be unsettled or irritable.  She was always walked thrice daily, fed at the same times every day and well-groomed so that little baby hands couldn’t snag in knots.

The babies were not allowed to approach the dog when she was eating, but she was permitted to sit politely beside them as they ate.  There were rules: dropped food was fair game, food snatched from small hands merited banishment to a separate room.  For a few months this was the only time that they could sit closely to one another without growling, and she was astonishingly tolerant of their efforts to pat her when there was the possibility of a slice of cheese toast being dropped at her paws.

We never punished her for growling at them.  Growling at them was her way of telling us that she was uncomfortable with the situation and she learned very quickly that if she growled that was all that she needed to do, because we would remove them from the situation.  In a matter of days she stopped looking at the babies as she growled and started looking at us, clearly aware that help was coming.  Growling may seem scary but it’s actually a good thing as it’s your warning sign that your dog is unhappy; if you teach them not to growl, the first sign that you’ll notice is the snap.

On a similar note they were never, ever left unsupervised together.   If the parent looking after them had to go to the bathroom either the twins or the dog had to come too, and once the twins were too big to lug in to a separate room every time we wanted a wee we kept a travel cot erected permanently in one corner of the living room and popped them in there instead. 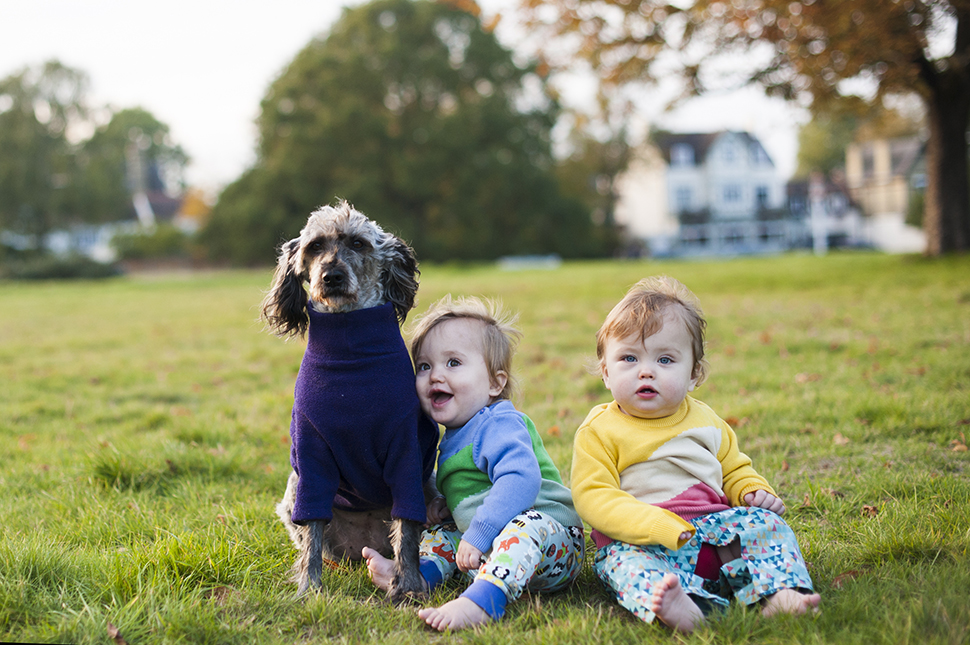 In this picture Balthazar is trying to get an arm around her.  Sometimes they sit together on our sofa, Josephine-dog hopping up after him by choice, and he says ‘Ahhh!’ and buries her face in his fur.  It’s the sweetest thing.  We would obviously never, never trust either babies nor dog around each other – to be honest, the babies are more likely to bite Josephine than the other way round and we’d hate for either party to get hurt – but we’re at a very enjoyable stage and loving watching their relationships with Josephine-dog develop.

Do you have a dog and children?  Which did you acquire first and how did you find the transition, what worked for you?

It sounds like all three of your babies get on great together! x

There’s only a three week age gap between my son and my puppy. Mum kept him at hers till Thomas was 15wks old and she had toilet trained him a little. Like you we’ve always been very careful of making sure that Thomas isn’t left in the same room as the children if we have to go upstairs etc. We are exceptionally lucky that Thomas is super tolerant with the kids 😀

They all look like they have a wonderful time together. Our dogs are always kept on the other side of a stairgate unless we are in the room. Baby tires them out, if they are together for too long! Such cute pictures xx