Last week I posted about planning a home birth against medical advice. It was a carefully considered choice made over a period of months and taking into account all of the risk factors for delivering dichorionic diamniotic twins at home. It was a plan that I feel confident about and comfortable with, a plan that made me look forward to their birth.

So naturally at about the same time as that post went live, the twins were confirmed breech. Lovely.

At the moment my happy little acrobats are sitting contentedly on their bottoms and I’m feeling most of their movements pretty low down. I’ve had my suspicions for a while now based on the frequency and intensity of the kicks versus the punches and on how I’m carrying (unlike my last twin pregnancy I can still breathe) but it was still a shock to have the breech positioning confirmed. My midwives seemed confident that there is still plenty of time for them to flip over and go head-down but at thirty weeks and not exactly small, it has me worried.

The Spinning Babies website has some useful ideas for turning twins, although when I tried sitting on the sofa with my hands on the floor I fell flat on my face. I’m going to find a swimming pool and do some optimistic handstands underwater. My midwife suggested that I talk to them and ask them nicely to turn, but if they’re anything like I was when I was small they will simply laugh wicked laughs and jam themselves in even breech-ier.

I’m not one for change. I don’t adapt well to last-minute plans even when they’re positive things, so getting my head around this less-than-positive news has been a mission. Breech. Both of them.

You can’t manually turn two babies in the way that a doctor could with one. It just doesn’t work. I could throw the biggest, panicky tantrum in the world and I still wouldn’t be able to convince somebody to manually turn the babies because it just can’t be done.

You can deliver breech twins vaginally but there are just so many risks. I want to say f- it and have them at home nonetheless, if it comes to it, but I feel like I should weigh up my options even if I’d rather bury my head in the sand.

So what if they don’t turn?

What is plan B?

Do I need one?

The logical compromise is the birth centre that is attached to our local hospital. It’s actually quite lovely and I was disappointed to ‘risk out’ of being allowed to use it when my first set of twins were born. This time it was offered as a compromise surprisingly quickly when I announced an intention to home birth instead.

I’ve seen the birth centre. It’s nice. The rooms are bigger than my living room at home and they have more equipment than your average private gym. The birth pool looks amazing.

I don’t want to deliver in the birth centre.

Last time it would have been a lovely option. This time I have children and whilst they have been invited to be present if I deliver at the birth centre, against usual protocol, I don’t want that. Unlike at home, where my partner can be with them in another room and just poke her head around the door occasionally, at the birth centre the toddlers would be right there, merrily dismantling the room. I don’t want the distraction and I’m sure that the medical team don’t want to be tripping over toddlers every time they turn around. That said, I’m not sure that we’re ready to have anyone but us look after them and I want to keep my labour private – which means definitely not having family looking after our toddlers. I think that if we settle on the birth centre we’ll have to have Kirsty come right at the end, to be present for the delivery, but stay at home until then. It sounds a little lonely.

At the moment I’m sitting on the fence, hoping that twin one at least surprises me by flipping. It feels like a long time until my thirty-five week appointment to confirm their positions again and finalise a plan for the birth.

If you have any optimistic stories about breech babies that decided not to be breech after all, by all means go ahead and share! I’d love to hear.

I’m sharing these pictures, which were taken about two weeks ago, because they make me look strong and confident.  I don’t feel very strong or confident right now but perhaps if I fake it convincingly enough, it will come. 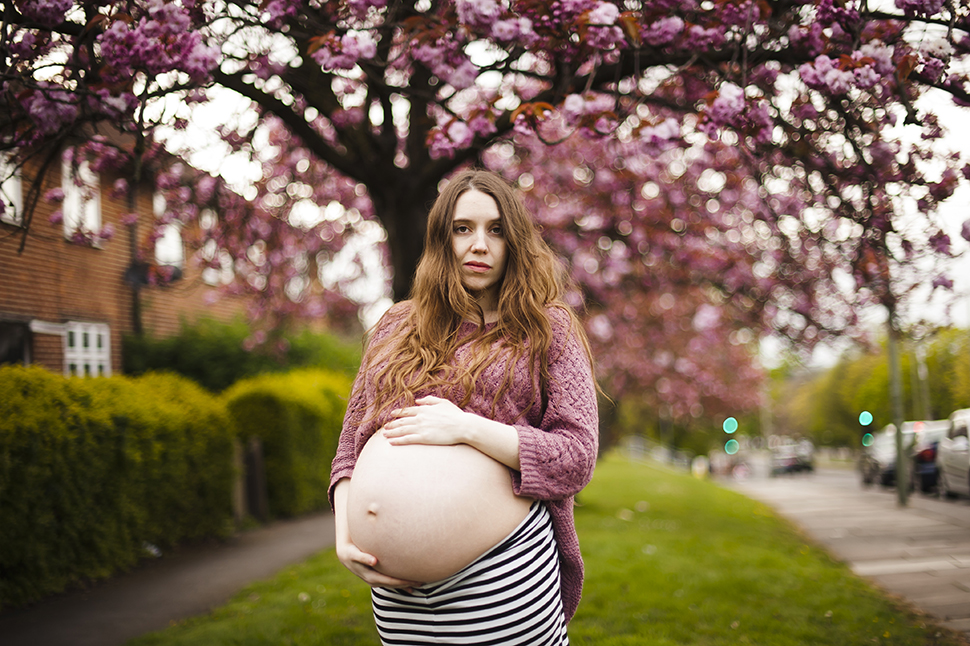 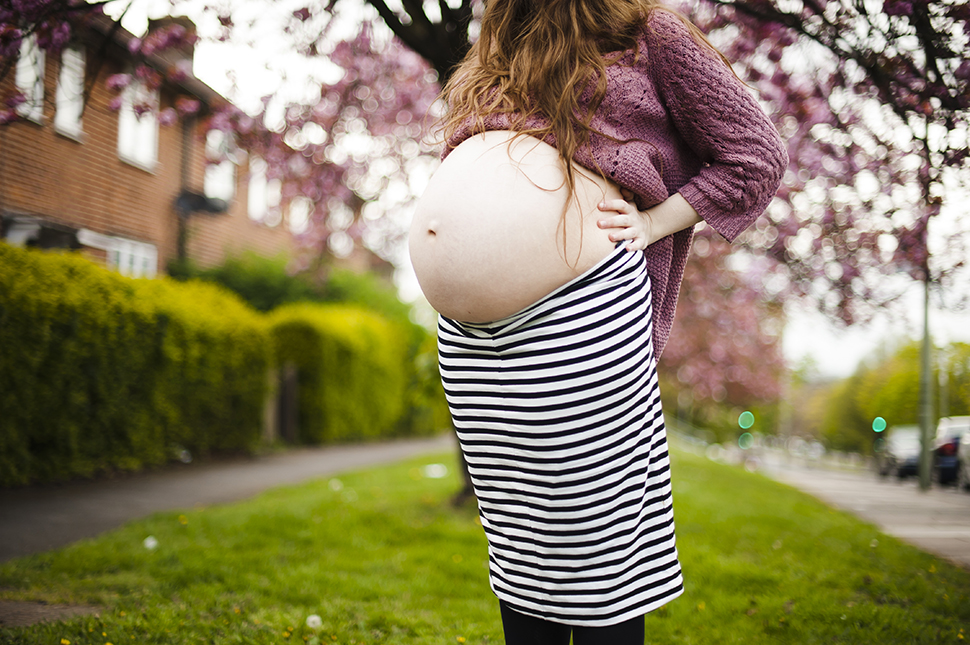 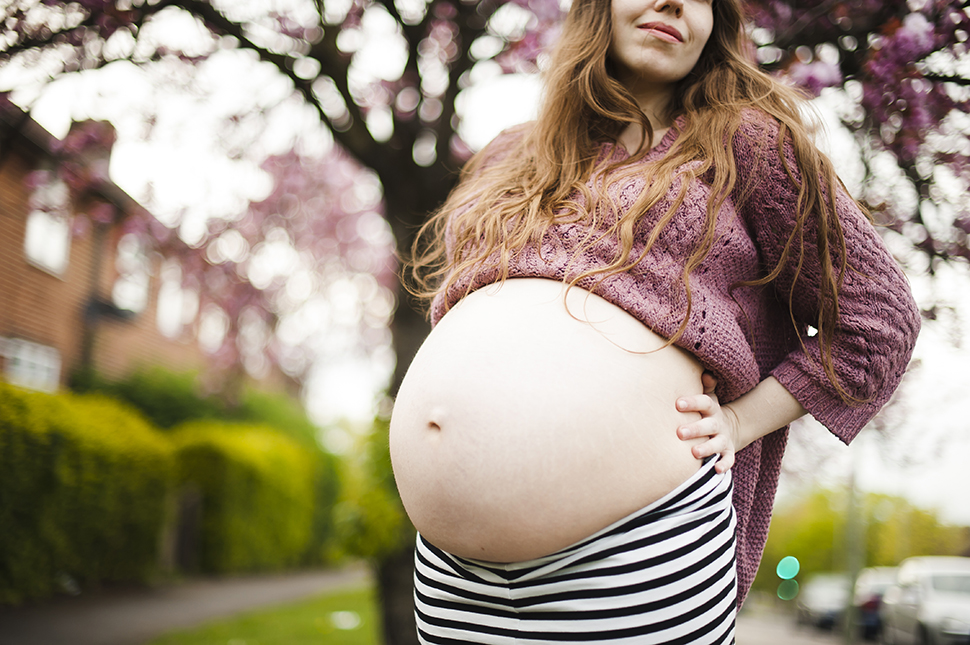 If you enjoy my pregnancy posts, please consider voting for The Goblin Child in the Best Pregnancy Blog in the MAD Blog Awards.  It only takes a moment and I would be super grateful.

Bath, Book and Bed with the Book Trust and the Supernanny

Siblings Project in May 2016

[…] the other and they kick and squirm more than their brothers ever did. At the moment they’re breech and I’m desperately hoping that they decide to turn around so that I don’t have to make […]

Gorgeous photos of you and bump. Birth is such a tough emotional decision especially when you have other children and factors to consider, I hope that they turn, that they listen and comply and you get the home birth you dream of. I have to admit I laughed at the prospect of their defiance and your use of the word breech-ier! Xx

Well I don’t know about twins but I have had a baby flip to transverse and then breech at 38 weeks (transverse at the scan in the morning and full breech by the time they admitted me in the afternoon – and then sent me home again because breech wasn’t such a worry as transverse) . We were supposed to come in the next day for an ECV but they were busy so we went to watch Twilight at the cinema instead and by the time we came back on Wednesday morning miss Elma was head down and there she stayed until she was born a full three and a bit weeks later. I did try lying with my feet up the wall for a bit and I did talk to the baby and tell it to please turn so your midwife might just be on to something – that or you need to binge watch Twilight!

Greets Indy from the board.