Home Twins The Day that they met Father Christmas
Twins

The Day that they met Father Christmas

Christmas. I remember the magic of a childhood Christmas but dimly, as though it were a dream. The countdown as the days began to shorten, the questions from family members “What do you want for Christmas?” heralding the beginning of the season. Advent calendars (plundered of chocolate by day three), going through catalogues and highlighting everything that we could possibly want. My sister and I winding each other up into fevers of excitement, sleepless nights so that we were exhausted by Christmas day. The thrill of decorating the tree, of getting out our stockings, of Christmas Eve with our grandparents.

Sneaky bowls of rum toff when really we were far too young to be drinking (but so syrupy-sweet, we loved it), brandy butter, enough roast potatoes to sink a ship. The party games, the piles of wrapped toys, the way that Christmas seemed to go on for days. It was magical.

Last Christmas the twins were seven weeks old and although I had grand ambitions for their first ever Christmas, we didn’t really do much. A friend of mine crocheted them dear little santa hats which they wore out shopping a few times and we started what we hope will be a tradition of taking a family photograph beside a decorated fir tree in the woods on our pre-Christmas lunch dog walk, but that was more or less it as far as our festivities went!

Now that they are a bit bigger and, more importantly, I’m no longer pumping breastmilk around the clock, we’re able to get out and about a lot more easily and this year I have all sorts of plans for what I’ve been deeming the twins’ first ‘real’ Christmas. Our local community team, Visit Chislehurst, kicked Christmas off this year with a fab daytime fair followed by the lights parade, which saw Father Chirstmas come down the High Street on his sleigh switching the lights on as he went.

Although the twins loved to watch the lights and were fascinated by the crowds of laughing, excited children, the highlight for the whole family was that the twins finally met Father Christmas. 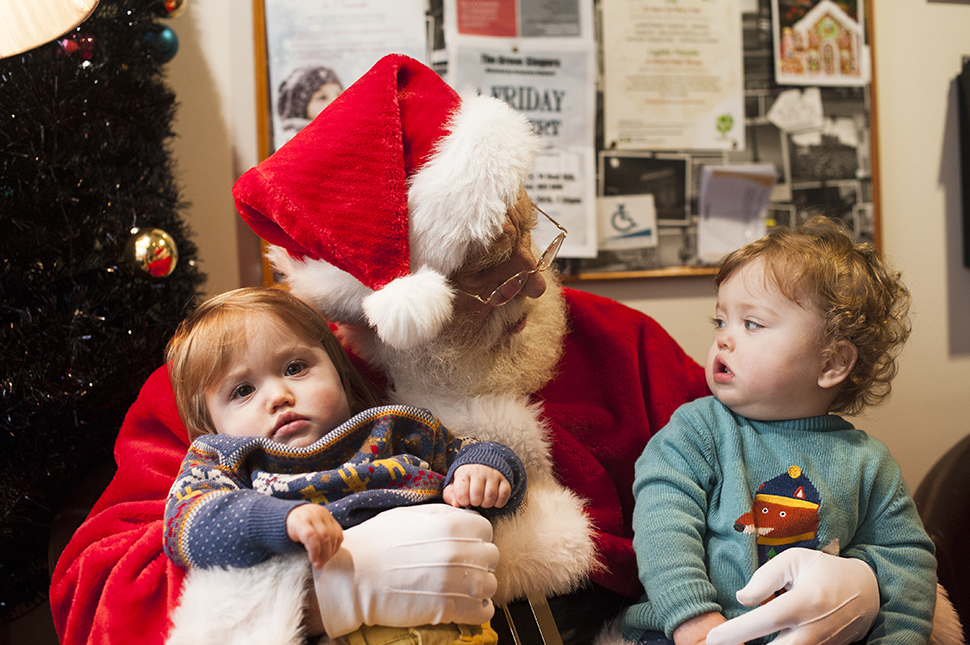 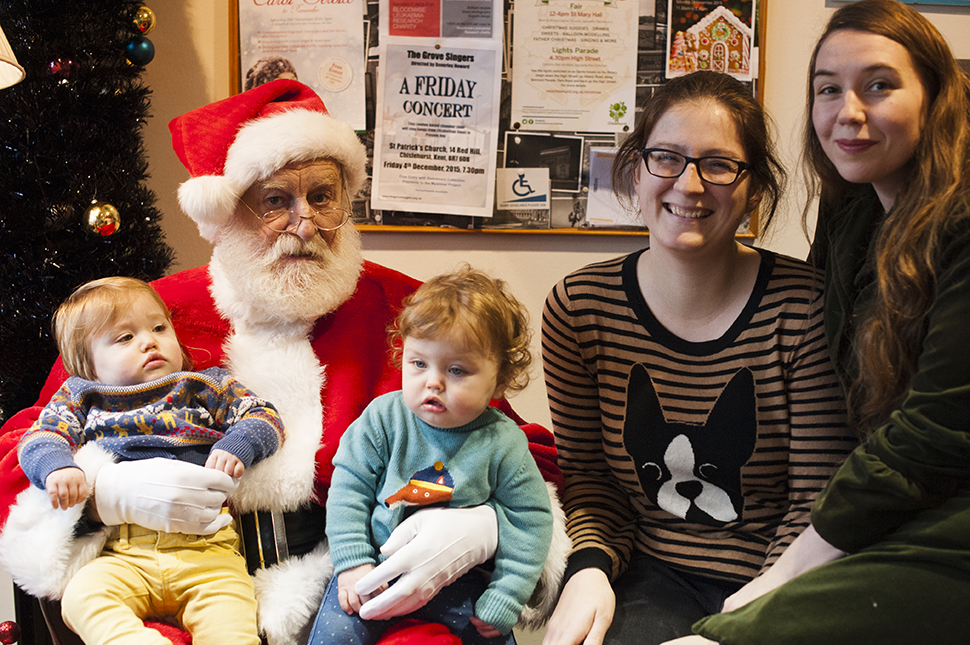 Balthazar wasn’t into it but Lysander – oh, Lysander could not take his eyes off of him! There was definitely some magic there. I had thought that they would probably cry as I don’t think that they have ever been handed to a stranger before and they weren’t in the best of moods anyway having missed a nap in order to turn up and meet with Father Christmas. But they didn’t, although they didn’t smile either, and now we have a print-out of these pictures to keep on our ‘fridge until January.

I love this season as a parent, even though I was known as ‘the grinch’ as a teenager because I found Christmas so difficult and unpleasant after my own parents’ divorce. Christmas as a parent is like having a second chance at all of the magic and so far it is everything that I had imagined it would be and more.

What the Twins Wore For: A Quiet Afternoon (Cololo)

He looks like a pretty good Santa too! Lovely photos x

Oh this is so cute Amber! That last picture of you all is lovely too. The twins look a little taken aback by the big man in red 😉

So cute! I love the whole family shot with the big man! I hope you have the most wonderful of Christmas time’s together. x

[…] started this month by visiting Father Christmas, the twins’ first visit, and it inspired me to write a bucket list of all of the things that […]