The Milestones You Make

Recently I wrote about missing milestones as a working parent, after I realised only after my twins’ first hair cut that I had really wanted to be there for that.  Nobody’s fault, just one of those things, but I think that everybody was surprised by the tears.  Lots of parents must have been able to relate because it was made the Mumsnet Blog of the Day and I received some lovely and really supportive comments, several of whom advised coming up with my own list of milestones.

I’ve been thinking a lot about this recently.  I love the idea of coming up with my own toddler milestone bucket list for the boys and circulating it so that Kirsty can’t be blindsided by my devastation when I miss another important moment.  Of course, they have already experienced many ‘firsts’ but thinking outside of the box there are still plenty for me to share.

All the same, it was sheer coincidence that I hit a baby bucket list moment on Sunday: the first babyccino.

I had been planning this one for a while.  It was going to be the subject of a mummy-baby date, two Saturday mornings, rare one-on-one time with them.  We were going to sit by the window, face each other, babble or talk.  It was going to be a table for two, bonding over a hot drink, him and me.

But it hadn’t happened.  It’s not that Saturday mornings are particularly busy in our house – I just tend to sleep in.  Let’s blame the pregnancy.  I could wake up early, snag a baby and go out – I just haven’t.  I’ve let myself feel guilty about it too, which is silly and unproductive.  It’s not that I’ve spent weeks ignoring my babies, they’ve just enjoyed my company in other ways.

But on Sunday, we found ourselves walking past Costa.  And I just thought, ‘Why not?’.  We had the dog with us so we couldn’t sit in but I ordered two hot chocolates and two babyccinos to go, and we took them to a local clearing in the woods.  We were shooting our Me & Mine monthly family portraits for March at the same time and so I had the camera and the tripod with me, which was fortunate because whilst I wanted the experience documented, I didn’t want to absent myself behind the camera.  I wanted to be there.

So we sat on the grass.  The toddlers, being toddlers, were off as soon as their tiny trainers touched the ground but we didn’t restrain them, we let them go and watched them play.  We sipped our drinks.  It didn’t take them long to notice that we had something desirable and soon they came to us, bright-eyed and determined, babbling their baby babble and reaching for the tray. 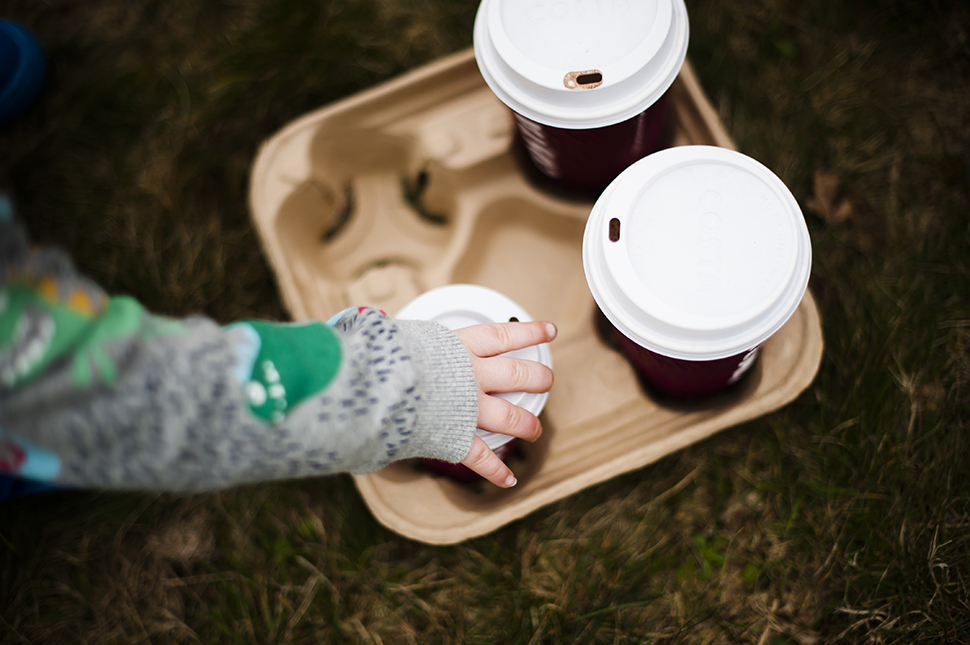 “Oh, you suspect that toddler-sized cup might be for you..?” 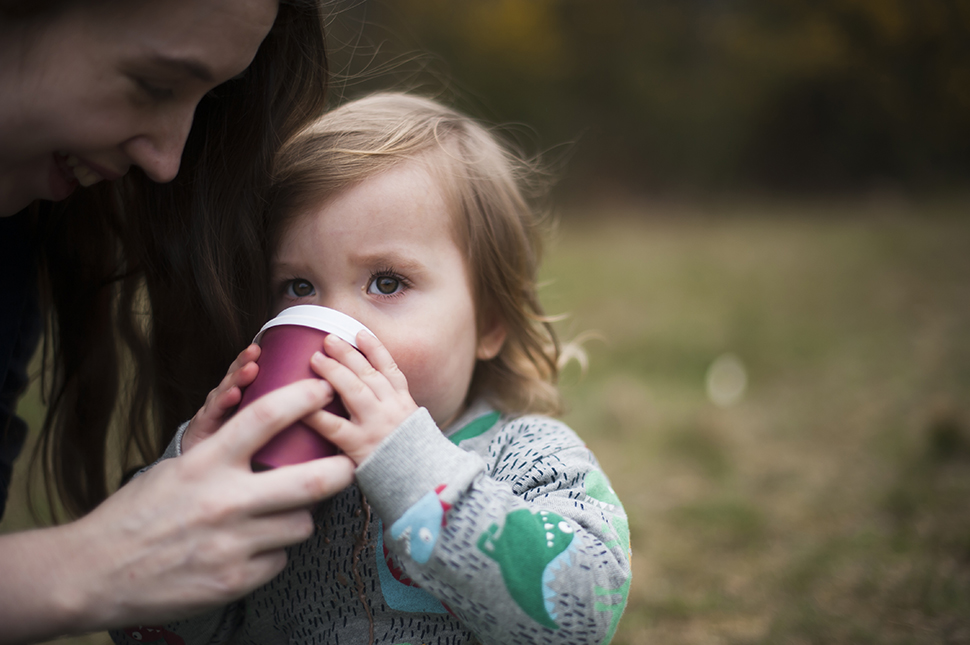 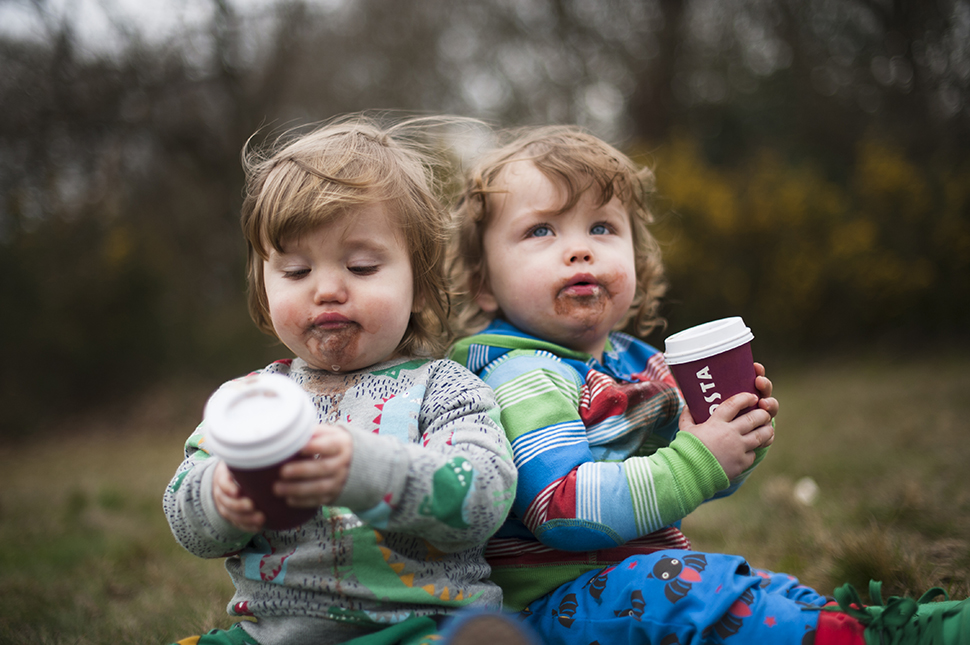 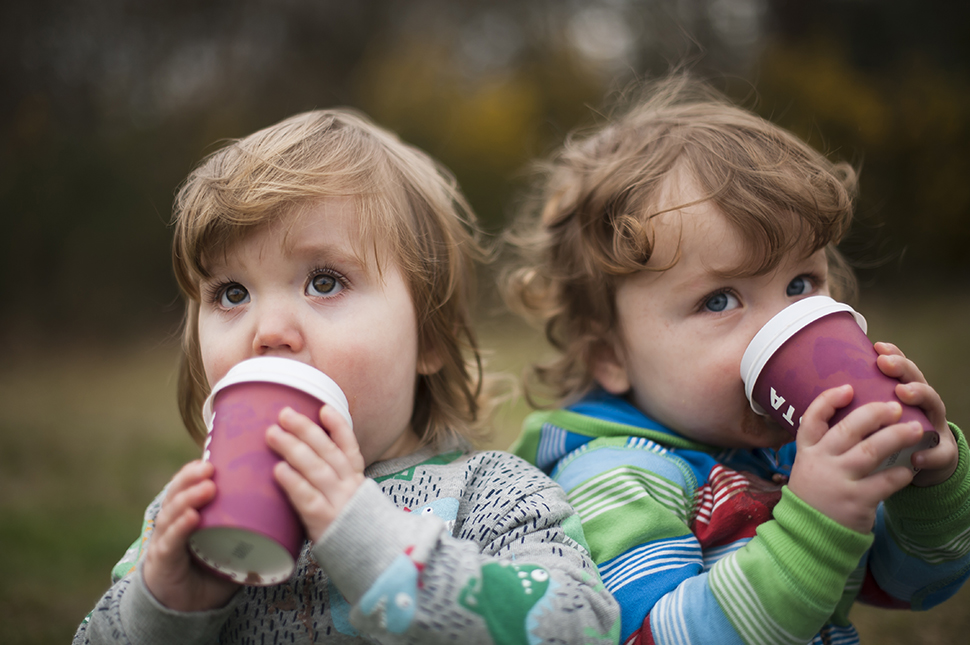 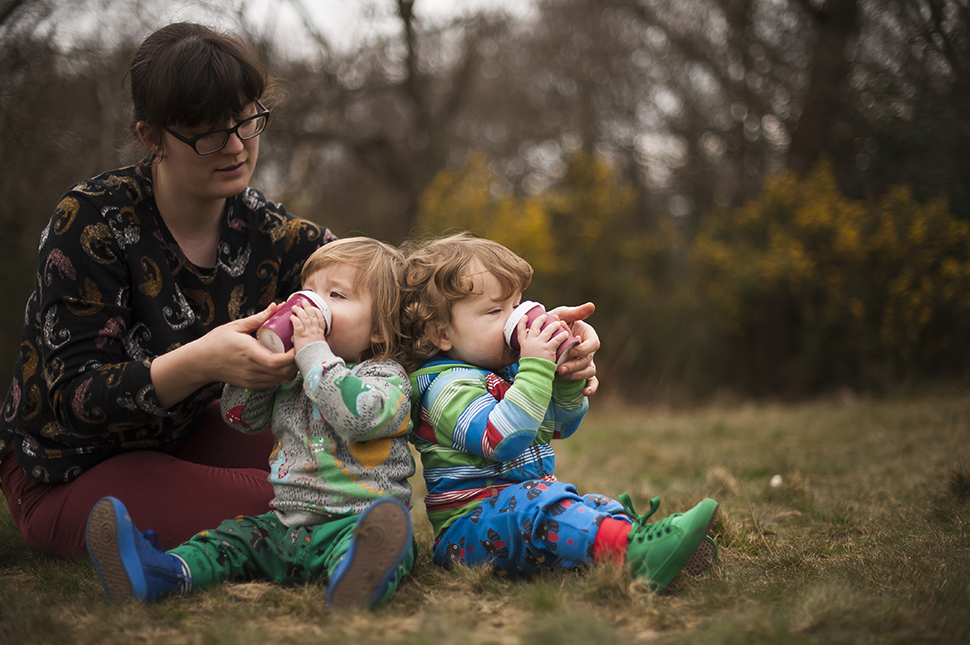 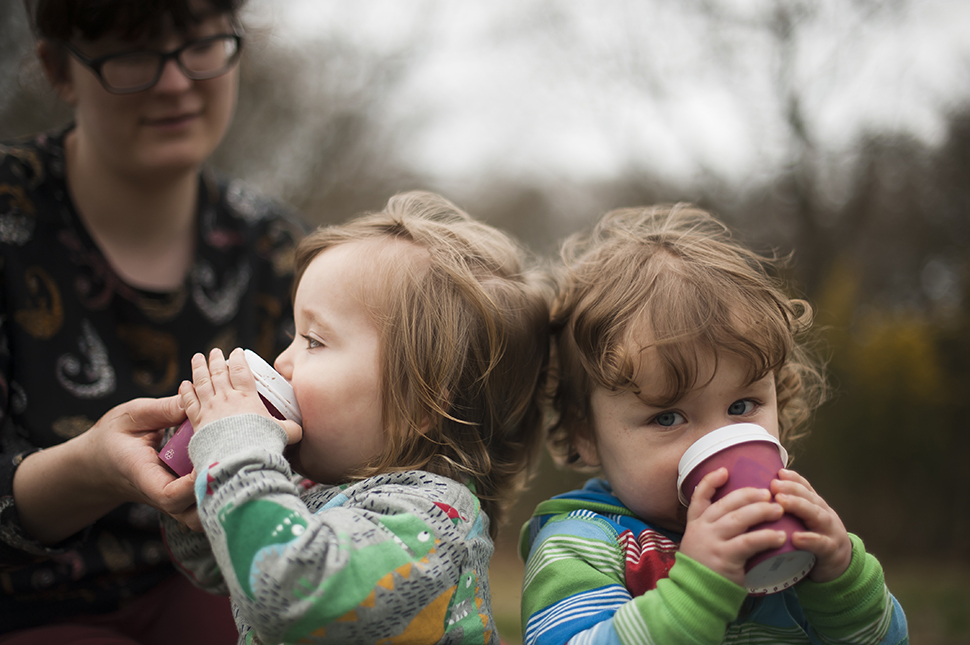 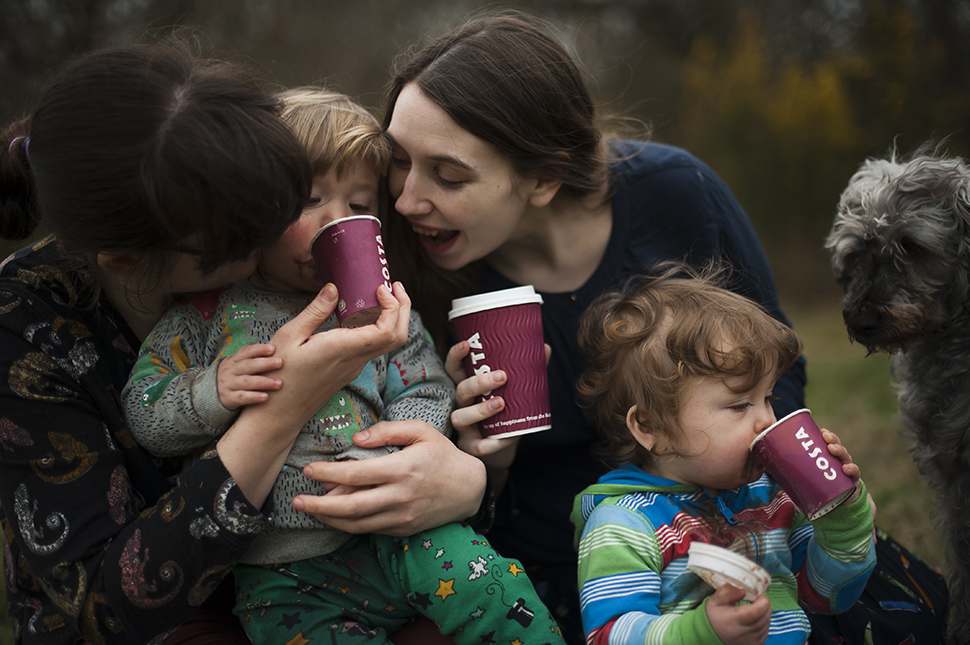 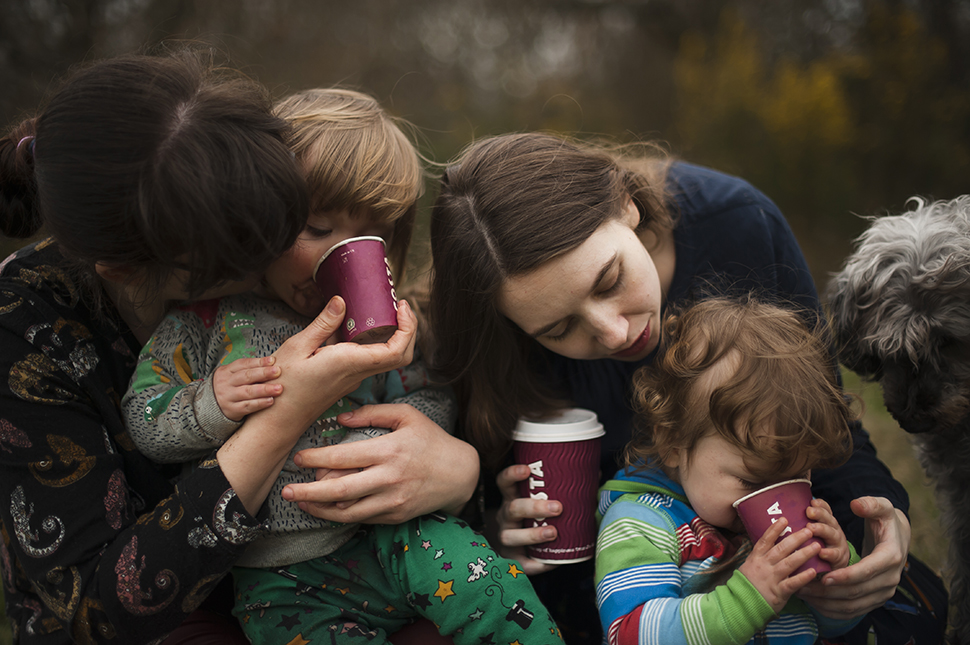 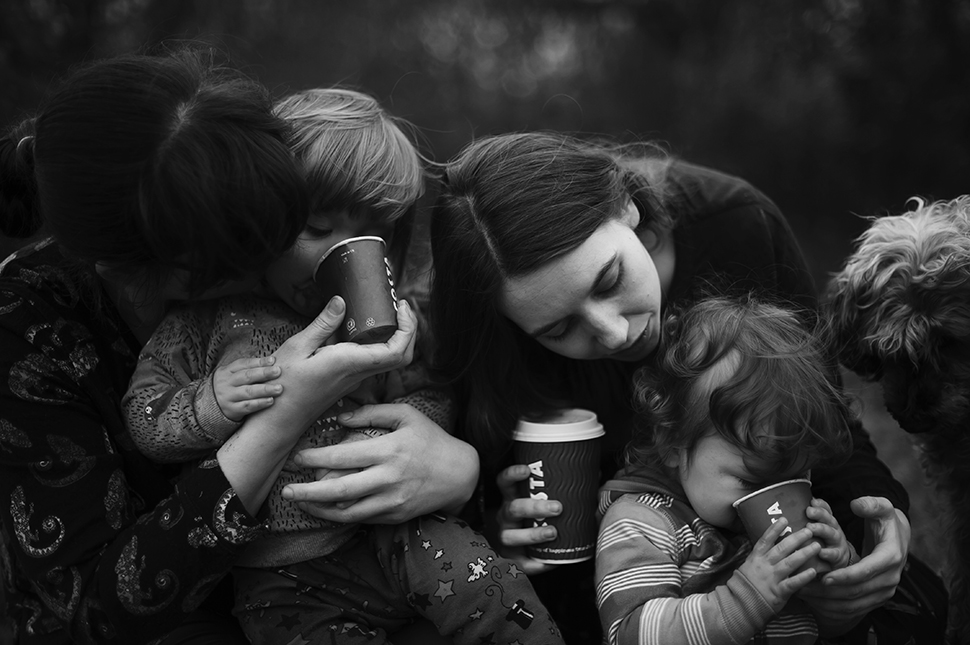 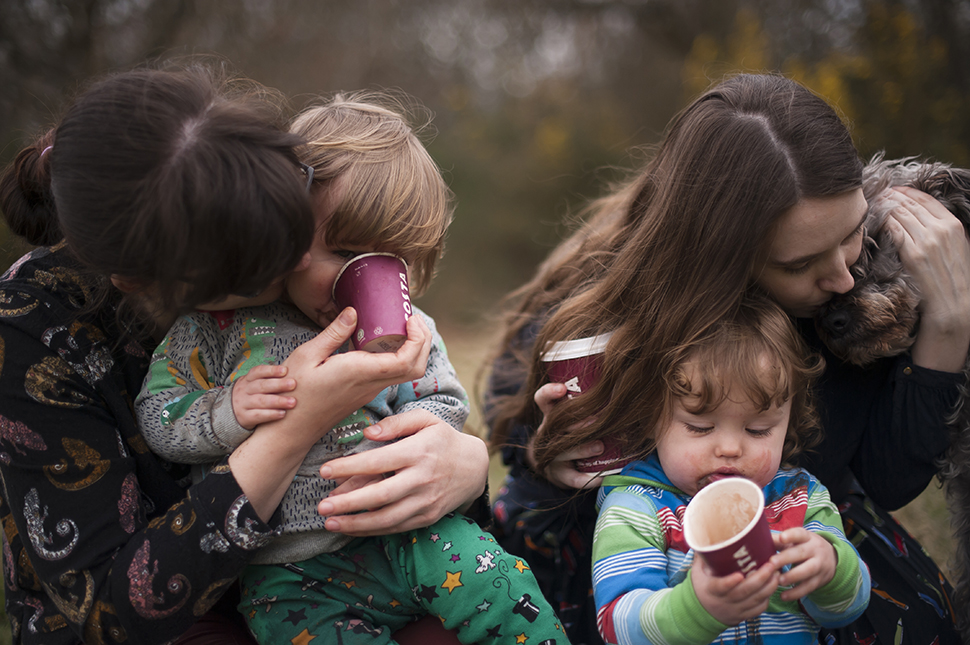 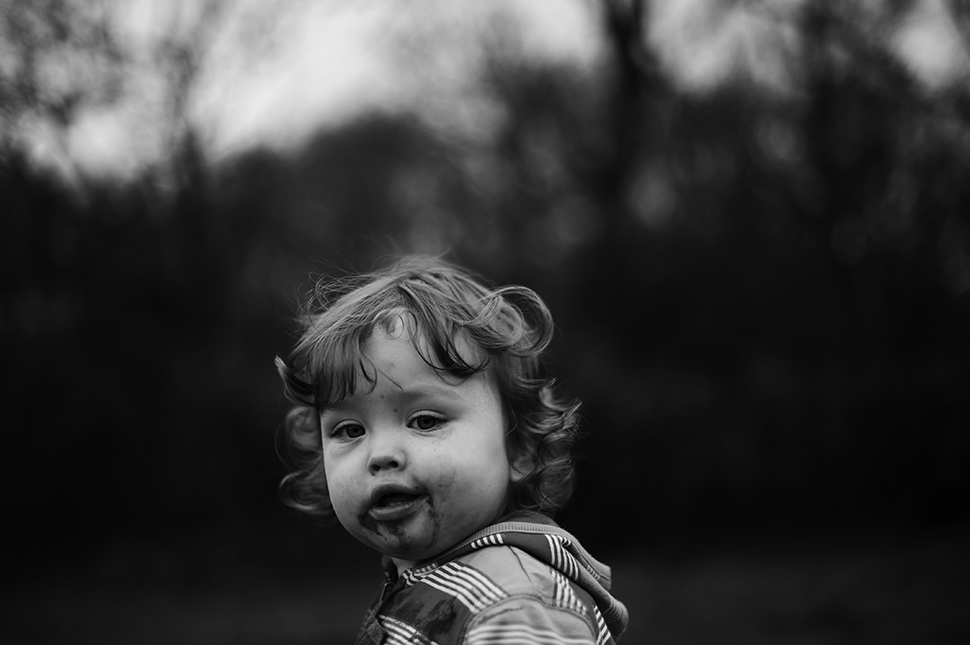 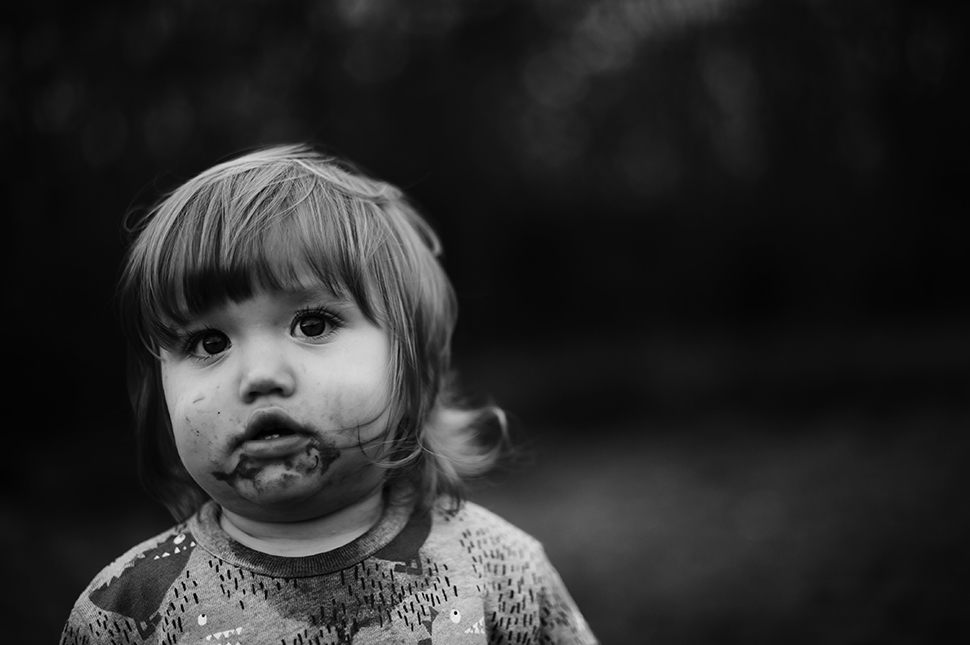 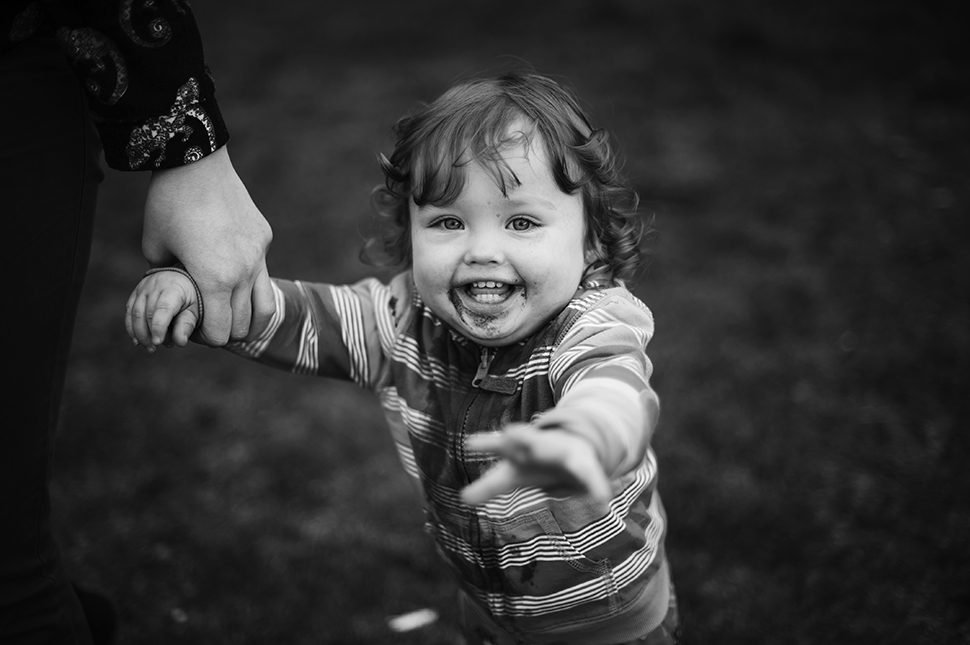 They will never remember that evening.  They will never remember whether or not I was there for these early experiences, whether I held them close and kissed their silky heads and felt grateful to share in the experience or whether I was in the office with my mind far away.  When they are grown, they won’t know unless we tell them that when they see me in the morning they say “Bye!  Bye!” and wave their tiny hands, that they are surprised when I stick around for breakfast.  That when Kirsty asks where Mummy is, they point at the front door.  By the time that they are old enough to remember these things, bedtime will be later and they will have me before they sleep.  I hope so, anyway.

But it mattered to me that I was there for this.  It mattered more than I can say.

You cannot beat a Babycino and I remember both A and T’s first ones. I love your boys’ gloriously happy chocolate faces x

So so so lovely Amber. You have a beautiful way with words. xx

Awww LOVE them!! Angels with dirty faces — just beautiful. And yes — little milestones like this matter don’t they? I was present for most of the huge milestones with my boys but EVERY new thing is a milestone isn’t it? A brand new experience that they or ‘we’ — when we’re with them — haven’t experienced before. Beautiful pics as ever — they’re growing so fast now! xx

[…] I have written before about the importance of making time to create – and recognise – special moments with my children.  We have a little toddler bucket list and make a point of finding things to tick […]